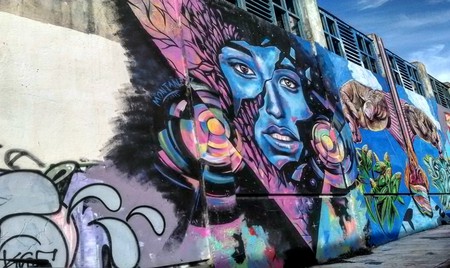 The haunt of rowdy sailors and scantily clad prostitutes in the early decades of the 20th century, El Bajo was the epicenter of Montevideo‘s underworld. Crowded, filthy and ironically sandwiched between a temple and a convent, it was described by socialist poet Emilio Frugoni as ‘the sore on Montevideo’s side’. Today, a full-throttle rejuvenation project has seen the area rise from the ashes to become the city’s cultural hotspot.

El Bajo de Ciudad Vieja was known as a ‘den of lowlifes’ until the mid-1970s. Abandoned and desolate, it was little more than an ugly reminder of its chequered past. Since then, revitalization has been gathering momentum at the hands of local artists, traders and entrepreneurs.

Centered on the corner of Juan Carlos Gómez and Piedras streets in Ciudad Vieja, El Bajo is now a haven for experimental theater and visual art. Every year, the Museos en la Noche and Día del Patrimonio projects bring thousands to the streets of El Bajo to celebrate Uruguay’s unique cultural heritage.

The blocks that spread outwards from Piedras are plastered with murals by the likes of street artist Alfalfa, with the doors of the charming old buildings – like Casona Mauá, a painstakingly restored 19th century manor house-turned-events space – thrown open to visitors. These once downtrodden streets bustle with gastronomy fairs, mobile photography exhibitions and a thriving outdoor music scene.

El Bajo’s bright, bold street art is some of the most impressive in the city. Set out on a walking tour of the streets either side of Juan Carlos Gómez to spot murals by local artists like Maldito Bastardo and La Tribu. Keep an eye open for the famous ostrich heads as you round each corner.

Hone your skills with the trusty pencil at one of Casa Wang‘s weekly drawing workshops. A rotating calendar of classes includes figure drawing with nude models and mural painting. This inclusive space – home to illustrators and designers – welcomes artists of all levels.

If healthy eating’s on the menu, stop for a bite to eat at El Bajo’s Tomate. Exposed cobblestone walls and stripped wooden furniture lend the place a rustic feel, while the vegetarian-led choices are a far cry from the meat feasts on offer at Mercado del Puerto a few blocks away. Try the legendary Ensalada Azul, with a fresh house juice on the side.

For hearty dishes with pretty presentation, head to Sandoval Casa de Comidas on Bartolomé Mitre. The industrial-style interior is brightened by bursts of orange and green, with a Mediterranean-inspired menu. Great value lunch plates might be bruschetta with goat’s cheese and radish, or hake with parmesan crust.