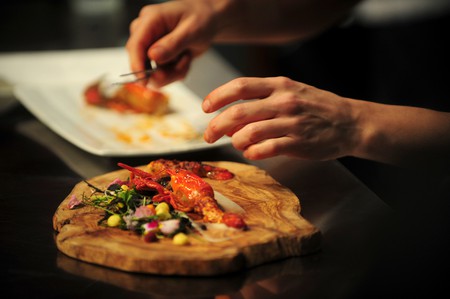 At his flagship restaurant, Central, chef Virgilio Martinez aims to to take diners on a gastronomic tour of his country’s diverse ecosystems, in 17 elegant courses.

Central, in Lima, Peru, has occupied the top spot on the list of Latin America’s 50 Best Restaurants for the past four years. It’s also ranked as the fifth-best restaurant in the world by the same organization, which gave Martinez the Chef’s Choice award this year as well.

Not just another fine-dining restaurant, however, Central takes you on a culinary tour of Peru, from the Pacific coast to the Amazon jungle, with each of your meal’s 17 courses representing a specific altitude and ecosystem. Each dish highlights the unique ingredients that grow together at its altitude and is often plated to resemble a scene you might see there.

Peru is a land of phenomenal biodiversity because of its landscape: the Pacific Ocean bordering the country to the west, the arid desert region on the coast, the Andes and their fertile valleys, the tropical Amazon.

Elevations range from sea level to the summits of some of the highest mountains in the world, and the ecosystems change dramatically in between. Most of the spectacularly diverse indigenous potential ingredients never make it to the major cities, or onto diners’ plates. But Central’s chef Virgilio Martinez has taken it upon himself to venture far from his native city of Lima to explore the possibilities.

Martinez grew up in Lima in the 1980s, a time of strife. The country was fragmented, and it was near-impossible to travel between regions. Martinez harbored a wanderlust: he wanted to explore, and since he couldn’t do so within Peru, he looked to travel to other countries and continents. He was told that getting kitchen work was a good way to do this, and found himself falling in love with kitchen life. He spent six years cooking in some of Europe’s better restaurants.

On a visit home, Martinez went to a local market and noticed the ingredients—including quinoas and potatoes—and realized he didn’t know much about Peruvian cuisine. He approached Gaston Acurio, then Peru’s best and most famous chef, for a job. He soon found himself working at the Bogotá spinoff of Astrid y Gaston in Colombia.

Two years later, Acurio sent Martinez to be the head chef at his new restaurant in Madrid, where he started to develop his experimental style. Acurio began to get reports that his protégé was becoming more creative than himself. After 10 years cooking under other chefs, Martinez realized it was time to strike out on his own, with his own restaurant. He opened Central in 2008.

At Central, Martinez quickly started receiving accolades for his high-end food. Guests told him it was like eating in New York or London. They presumably meant it as a compliment, but Martinez realized he needed to do something more representative of his home country. He took a year off from the kitchen to travel around Peru for inspiration, during which time he encountered local producers, local ingredients, and indigenous traditions.

A revelation came while Martinez was staying with a family in the Andes, near the ancient Incan terraces at Moray, which once functioned as agricultural testing fields. “After seeing these terraces, I was obsessed,” he tells Chef’s Table. An idea started to form.

In 2012, Martinez created a tasting menu with each dish representing an altitude and discrete ecosystem within Peru, ranging from 10 meters below sea level up to 4,150 meters. Each showcases the incredible biodiversity of Peru’s terrain and highlights the ingredients native to each region; when possible, he uses local cooking techniques as well. His goal is to virtually transport the guest to each place.

His first such dish was inspired by a visit to the southern Peruvian coast. “I saw the entire ecosystem of this rock,” Martinez says on Chef’s Table. “If these ingredients are sharing the same soil, same environment, same ecosystem, I thought that if we put them together back in our kitchen, it could work.”

“From the bottom of the sea to the top of the mountains in Peru, we have many, many, many different levels and altitudes. At Central, we want to show you Peru in every single way,” Martinez tells Chef’s Table. “You are here in the restaurant and you are eating a dish that comes from 4,000 meters above sea level, and you are experiencing the Andes. And then you’re going to go down to the sea; going up to the valleys; then you’re going to cross to the Amazonia. You are going to 17 ecosystems in one experience. At one point you can be a bit dizzy. But that’s very important not to see just the ingredient, not to see just the landscape, not to see just one region of Peru. For us to understand Peru, we have to see the whole thing.”

The following year, in 2013, Central entered the World’s 50 Best Restaurants list. In 2014, it was named Latin America’s best restaurant, an accolade it’s held for the past three years. In 2015, it bounced up to number 4 on the main list, which meant Martinez overtook Acurio, his mentor. Central remained in that place in 2016, too, dropping to number five in 2017.

Chef Martinez still frequently leads a team to forage within his country’s diverse topography—mountains, jungle, desert, and sea—and talks to local farmers and indigenous people to find out what they grow and use, and the stories behind each item. The team also seeks out obscure potential ingredients in each place, many of which have never previously appeared on restaurant plates.

He’s discovered tiny spheres of edible algae in an Andean lake; he uses tree resin considered purely medicinal by locals. ‘We use 180 ingredients,” Martinez says on Chef’s Table, “and probably 50% of them are unknown.”

To that end, he’s started Mater Iniciativa, the science and research arm of Central, which is led by his sister Malena. Martinez wants not only to use his team’s newly discovered indigenous ingredients, but also to preserve, identify, and catalogue them. If they sense one has culinary potential, they bring it to Central’s test kitchen to try it out.

“In Peru, we always have this sense of the unknown territory,” Martinez says on Chef’s Table. “There are lots of things just waiting for us to discover. Discovering these new things that people have never seen before, that’s my obsession.”