Elliot Tupac is a Peruvian screen-printing and lettering artist who pioneered “chicha art,” an aesthetic tradition with a rich social history. Chicha posters emerged in the 1980s with the rising popularity of chicha music, a combination of tropical and Andean rhythms. Soon Tupac’s family business began printing posters for musical groups in fluorescent colors characteristic of the traditional textiles of the Huancayo region, where Tupac’s family hails from. 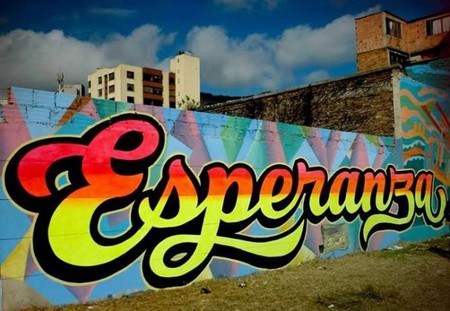 As chica posters grew in demand, Tupac began experimenting with modified typography and visual flourishes to gain viewers’ attention. As business grew, so did his commissions. Working on a national scale as a well-known Lima-based artist, Tupac now produces painted murals and collaborates with large companies like Cerveza Cristal and Telefonica, as well as international musical artists like the rap group Calle 13.

Through his work Tupac shifts traditional aesthetics into other contexts. For Tupac, drawing aesthetic influence from indigenous craft forms has broad social and political ramifications and challenges dominant aesthetic forms and ideas about indigenous traditions, including the belief that indigenous peoples are relegated to the past. While studying in university Tupac saw that more often than not, local traditions were pushed aside in favor of products and influences from the United States and England. As Tupac said in an interview, “I understood that my work couldn’t just be about beautiful colors, but should have a social message and display Peruvian identity.”

In reference to these ideas, the artist, born Elliot Urcuhuaranga Cárdenas, adopted the name ‘Tupac’ to align himself with the likes of the last Incan monarch Tupac Amaru, and indigenous revolutionary leader Tupac Amaru II. Tupac leverages the legacy of craft-based traditions to initiate conversations about colonial power, contemporary ideas about ‘progress’ and mass-production, and the relationship between urban and rural Peru. He is careful about how he curates his work in the city, and how it is viewed — he once turned down an offer from a bar in a wealthy subsection of Lima because the owners wanted him to paint a mural to serve as an ‘exotic’ decorative addition for its foreign clientele.

Today, Tupac’s graffiti-style murals span entire blocks and include traditional imagery like animals and figures in traditional dress. The lettering in Tupac’s work is always the subject of the artwork as a whole, however. Bold, bubble-like, and curling fonts shift from neon pink to bright orange and yellow in rainbow-like gradients. Often cast against a contrasting background or outlined in black, the words pop toward the viewer’s eye effortlessly. It is clear that each work is an advertisement, whether for a particular business partner or in the form of socio-political message. The effect is an interesting and uncommon one: Tupac’s work blends urban and rural art forms, and presents a popular challenge to mass-produced graphics. 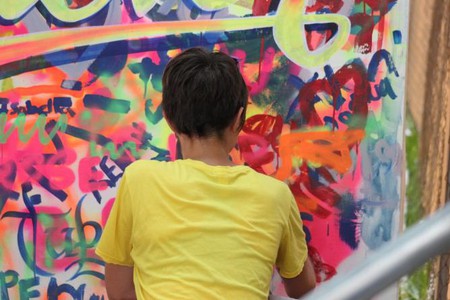 Cholo Power stretches across tennis courts by the ocean-side cliffs in Lima. The words float against the unfurling banner of the Peruvian flag. The heavy significance of the term “cholo” (a derogatory term for a person of mixed or indigenous blood) is striking in its lighthearted Coca-Cola-like script in pink, orange, yellow, and mint green. In the same way that his urban graphic motifs are embellished by a traditional palette, Tupac lifts ‘cholo’ into new context by rendering words in an unexpected manner, with new and empowering significance. Another example is the work Antes Soñaba (“I used to dream”), which depicts a dreaming indigenous child against a background of bright colors and geometric forms. Here, youthful dreaming signifies the dreams of a people.

Tupac has displayed his work internationally, most recently at the University of Chile, where he led a workshop to accompany the opening of his exhibition. He has also shown work at Rio Negro University in Patagonia, Argentina; Pixelatioons 2013 in Cordova, Argentina; and the Fundación Estándar Bank in Buenos Aires, Argentina. He has engaged in a variety of projects including collaborations with filmmakers and musicians throughout Peru, and many of his murals are displayed publicly in Lima. A rising star in the international art world, insiders know that Tupac is someone to keep an eye on.