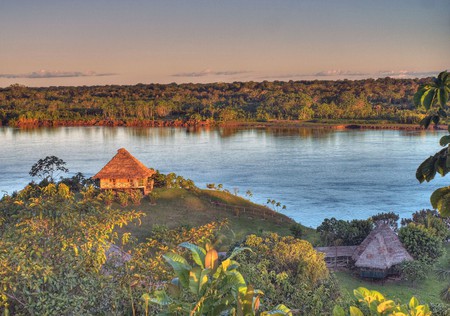 If Peru were to be labelled according to its dominant geographical region, it would be jungle. With 62% of its territory in the Amazon rainforest, the country has long been pushing for ecotourism in a bid to raise awareness of its biodiversity, and to help conservation efforts. Discover what’s on offer to plan a trip to the Amazon.

Ecotourism – a form of tourism in natural areas that provides funds for conservation and local communities – is part of Peru’s National Parks and reserves. Not only does it raise awareness, it also helps fight global warming and deforestation caused by illegal logging and mining; practices often revealed in satellite images. Out of the 14,712 species of animals found in the Amazon, 8,000 are unique to the region, and many of the 20,000 plants grown there have been used as medicine by native communities since time immemorial.

A popular destination for travellers with limited time who want to visit Peru’s jungle is the Pacaya Samiria National Reserve. Those who make the journey fly from Lima into Iquitos, the capital of the Loreto region, then take a bus to Nauta, a city two hours away from the airport. All that’s left is a two- to three-hour sailing trip to the main entrance of Pacaya Samiria. This National Reserve is located in the Omagua, or low jungle region, and is often dubbed the ‘underwater jungle’ due to heavy rains in February and March. It’s also home to endangered species like manatees, black caimans and the rare but beautiful pink dolphins that form part of native mythology.

Most tours offer three-night trips and include lodging, land and fluvial transportation, guidance and meals. Remember that anywhere in the Peruvian Amazon will be extremely humid, requiring light clothes for long treks, and boots for often-encountered muddy areas. Forgetting repellent is also out of the question; bring as much as possible, preferably if it’s biodegradable and the strongest available.

Those looking for another National Reserve to visit should head to the Tambopata National Reserve. Located in the Amazon basin in between the Puno and Madre de Dios regions, Tambopata is a 45-minute flight away from Cusco. It’s recommended that visitors take at least three days to see the permitted tourist zones in Tambopata, as well as other popular areas like Lake Sandoval and – should it be in the tour – visit the Bahuaja Sonene National Park, home of the anacondas and 1,200 species of butterflies, among other exotic animals. Birdwatchers should know that Tambopata has more than 600 species of birds, and the most frequently seen ones are the multicolor macaws hanging at clay licks. Don’t forget the binoculars!

Should a more spiritual and unique experience in a not-so-touristy area of the jungle appeal, then plan a visit to the Manu National Park, also known as the most biodiverse place on Earth. However, before even arriving in Peru to go on this trip, know that a yellow fever shot is required for prevention (no cases of yellow fever or malaria affecting tourists have been recorded yet). This is a trip that should take at least a week, since the area is not as accessible as the other national reserves. To get there involves a day-long bus ride from Cusco to the Madre de Dios river, followed by a half-day sailing into the entrance of the Manu. Comfortable lodges with showers are run by natives mostly from the Matsigenka peoples. The Manu National Park is also inhabited by isolated natives who haven’t made contact with modern civilization in the last 150 years, so it’s important visitors avoid contact at all costs in order to respect their lifestyles and protect them from easily contagious diseases unknown to them.

Tours include cooks and enough drinkable water for the entire trip. Some lodges do have electric power for the purposes of charging phones and cameras, but bring extra batteries to cover all eventualities. Extensive walks take place to sightsee animals like the Amazonian tapir, giant river otters and 14 species of monkeys, and depending on tours available, there may be a chance to interact with the Matsigenka and learn about their culture and customs. Other activities may include a visit to Cocha Salvador, a lagoon where you can spot the mighty otorongo (jaguar) resting on a fall tree, or Ayahuasca sessions (up to the visitor).

Above all, the emphasis for visitors is to always be respectful of the environment and the native people who live there. Ecotourism in the Peruvian Amazon is meant to help fund local communities and also raise awareness about human damages that threaten the biodiversity in the area. Although deforestation is 75% less likely to happen in areas officially recognized as native territory, an alarming part of the Peruvian Amazon falls prey to illegal business, with the natives and the ecosystem as the first to be affected. Conscious ecotourism can help prevent a catastrophe from disappearing this safe haven on Earth.