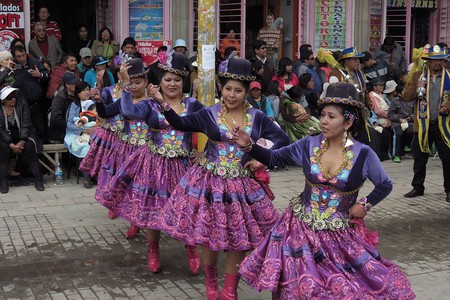 Not one pollera is the same. Polleras are traditional Andean embroidered skirts made of wool by applying handweaving techniques. Each pollera varies on its multi-colored patterns and styles according to the region they’re worn in. Despite having received discriminatory opinions in the past, wearing polleras is a sign of identity and tradition still preserved with fervor around Andean towns in Peru and Bolivia.

The history of polleras begins with its name. During Spanish colonization of the Americas, European fashion trends quickly crossed the Atlantic. One of the popular outfits was the long and elegant skirts worn by women. This garment’s volume was similar to the round shape of a bird cage (hence the name pollera; pollo means chicken). Soon Andean women began wearing polleras made of sheep or alpaca wool, and mixed the Spanish garment with their pre-Hispanic fashion. 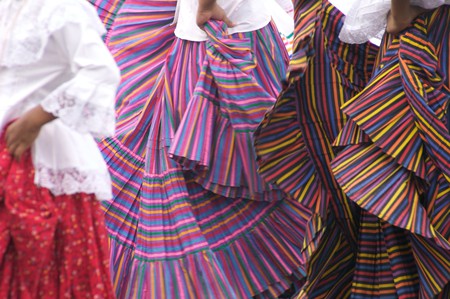 Nowadays the heirs of the first polleras are often seen wearing the garment on any given day, although they tend to bring out of the closet their most special polleras for carnivals and other festivities like Virgen de la Candelaría festival in Puno, where they can wear up to 15 other polleras – or under dresses. Although it would seem that wearing so many layers is too much, it’s an Andean custom for women to protect themselves from the cold climate in regions located at higher altitudes. 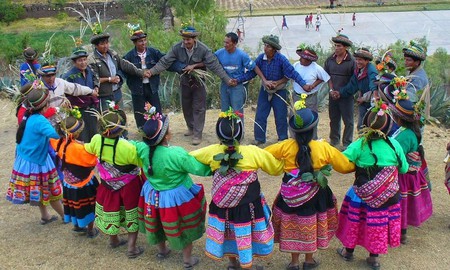 The delicate process of hand weaving a pollera could take many days. The straps that surround the polleras — and often stand out the most — are called puytos. They’re hard-weaved onto the wool fabric and the colors are often bright neon yellow, green or purple. The designs can be themed or represent a special event or memory.

Women with polleras are also seen in Lima. Congresswoman Claudia Coari Mamani was even praised by Bolivia’s president Evo Morales for wearing a pollera to Congress meetings with pride and not being afraid of showing her heritage. 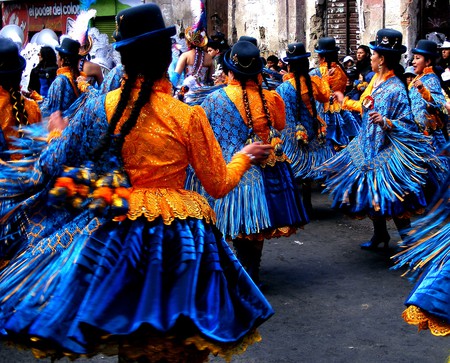 Aside from traditional events where women wear polleras, in La Oroya, a town located 12,303 feet (3,750 meters) above sea level, 18- to 60-year-old women gather on International Women’s Day – March 8 – to take part in a running race called Nuna Warmy, which means “women’s soul” in Quechua. Despite windy and rainy conditions, these women’s dress up in polleras and run as a symbol of strength and perseverance. Another sporting event where women wear polleras, especially students from different schools located in high altitude regions, is soccer. Last year, as a celebration of Copa America, girls from different schools in the highland zones of the Lambayeque region played an entire soccer tournament in their polleras. 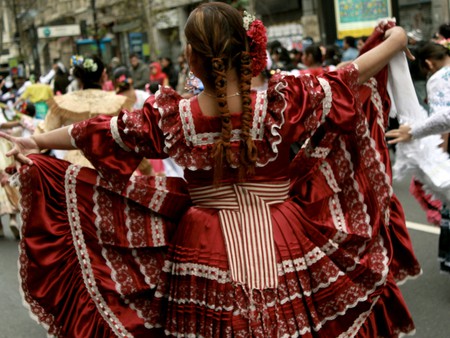 In the last decade, polleras have also made an appearance in the fashion world. Qarla Quispe is a fashion designer who understands that polleras mean identity. Quispe’s work revolves around empowering women and youth, and featuring their cultural heritage in polleras by using urban elements can help them define who they are and where they come from.

Another attempt at promoting the colorful art of polleras at an international level is Polleras de Agus, a project that seeks to rescue the pollera art from regions like Cusco, Huancayo and Huamanga. If you are in Lima and would like to see how they are made, you can visit Gamarra, Lima’s biggest clothing outlet, where there’s a block dedicated to tailoring this vibrant garment.