11 Delicious Dishes That Are Worth a Trip to Arequipa, Peru 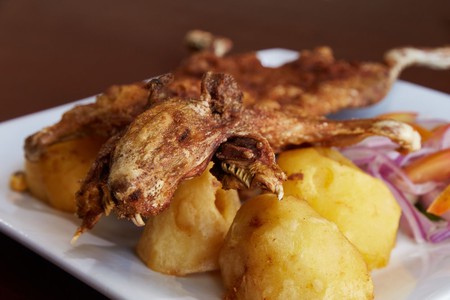 You’ll probably be heading to Arequipa to see Colca Canyon or to climb El Misti, the volcano that overlooks the city. You’ll also want to spend time in the Plaza de Armas, which is made out of white volcanic sillar. But did you know that there is another great reason to head to Arequipa? Lima may get all the gastronomic attention, but Arequipa is home to some of Peru’s most famous and delicious dishes. Here are some of the foods that’ll have you staying an extra day or two in Arequipa so that you can try them.

Fried guinea pig. Enough said. You can’t leave Arequipa without trying their take on the Andean delicacy cuy. It’s covered with a hot sauce and then fried – bon appetit!

The rocoto relleno began in Arequipa, and went on to sweep the entire country. You can now find the dish wherever you are in Peru, and that’s a great thing, because it’s delicious. Rocoto relleno pepper looks like a bell pepper, but tastes like a hot pepper. They stuff the pepper with ground beef, onions, garlic, and some vegetables; add some cheese, throw it in the oven, and you got yourself Arequipa’s most famous dish. 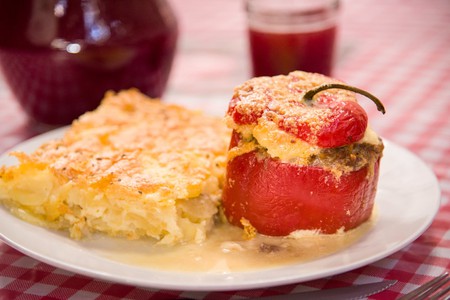 The pastel de papa is usually served on a plate together with the rocoto relleno. When you go to one of Arequipa’s famous markets, you’ll be given the option to have it served with the pepper or some ceviche. Pastel de papa is a layered dish like a lasagna, but with only cheese, eggs and potatoes. It’ll be served warm and is best with some hot sauce added to it for extra flavor.

Traditionally served on Sundays, this marinated pork soup is a must-eat while in Arequipa and is a famous hangover cure. For those who love pork, this is your meal. The pork chop is simmered in a pot with onions, rocoto pepper, peppercorn, garlic, cumin, and other tasty Peruvian spices. 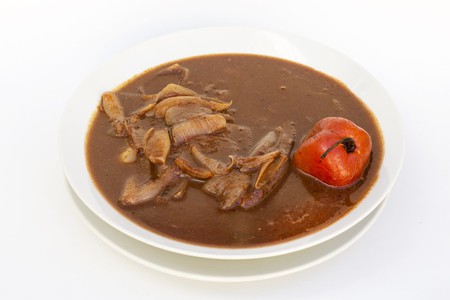 Soltero de queso is very simple, but enjoyable, especially when you consider that there really aren’t any typical salads in Peru –this is the best you’ll get. Dice up every vegetable you have, add some cheese and olive oil, and there you go. Simple, but tasty.

Ocopa is a spicy, peanut-flavored sauce that is served over boiled potatoes. The idea is to lather up the potato and the plate with as much ocopa sauce as possible because, well, you’re just eating a boiled potato and you’ll need the flavor. You’ll like the sauce so much you’ll be looking to put it on everything, and you can. At the Arequipa market, they sell little packets of homemade ocopa for only 1 sol (US$0.31). 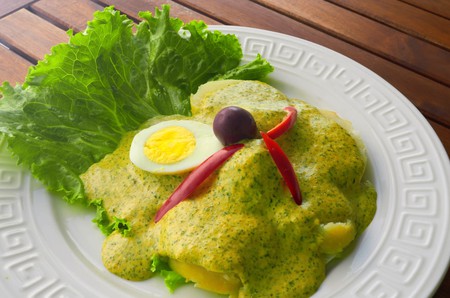 This isn’t a dish, but ice cream – well, ice cream with a twist. Arequipa has become, in part, a famous food destination for this oddity: ice cream made out of cheese. Yes, cheese. You won’t have to look far to find it, as they are sold at little stands all over the city, just about everywhere that tourists go.

It may not seem like it while you’re in the city, but Arequipa department actually reaches all the way to the Pacific Ocean. From the sea, fresh fish is sent into Arequipa daily, so you can get the best of the ocean right in the White City. Because of this, Arequipa has a delicious shrimp soup that you’ll find on every menu del dia. It’s a thick soup made with tomato, shrimps, hot pepper, potatoes, milk, and eggs, and is perfect on a cool day.

Estofado de res, at its most basic, is beef in sauce with rice on the side. The beef is marinated and drizzled with a delicious sauce. 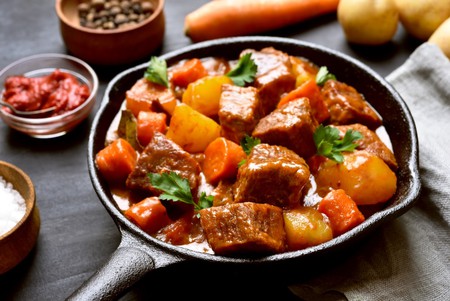 These colorful cookies are sold everywhere in Arequipa; you’re bound to find them for sale on a street corner, no matter where you are. They come in different colors and sizes, including giant and bite-sized.

Eating fresh fish may sound odd considering that you’re in the middle of the desert, but Arequipa has a couple large rivers that run near it, with an abundance of delicious trout. Any way you choose to have it served, it will be fresh and tasty.