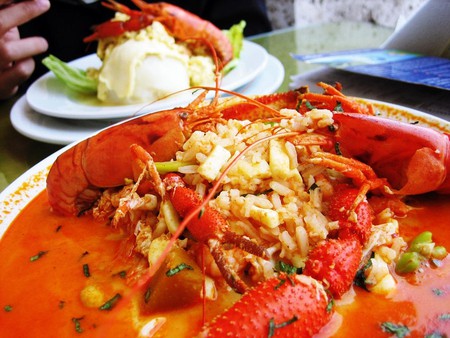 In the last 10 years, Peru has been recognized as one of the world’s best culinary destinations, a perfect option for foodie tourism. The country’s gastronomic boom owes a great deal to its biodiversity along with its multicultural heritage. Here are some of the reasons why there’s no better place in the world to dine.

The mix of flavors in Peruvian cuisine reflects the mix of cultures that have arrived in Peru over the last 500 years. It began with pre-Hispanic cuisine that gave us dishes and cooking methods like pachamanca and cuy chactado. Then, when Spanish colonization began in the 16th century, Moorish influenced dishes were introduced to the menu; the onions, spices and honey desserts are now fundamental to every meal. When Chinese immigrants arrived in the 19th century, their cuisine seamlessly melded with Peruvian traditional dishes and created the super-popular Chifa. Other big gastronomical influences are African, Italian and Japanese cuisines.

Coast, mountains and jungle. Each of these three geographical regions offer their own traditional dishes cooked with local ingredients. Such is the case of quinoa, which is found in the mountainous areas, while limes and grapes are cultivated by the coast, and yuca roots and fish like Paiche (the biggest fish in the Amazon river) are found in the jungle. If you’re traveling around Perú, you will see how the biodiversity of each of the country’s 24 states is proudly represented in each region’s gastronomy. 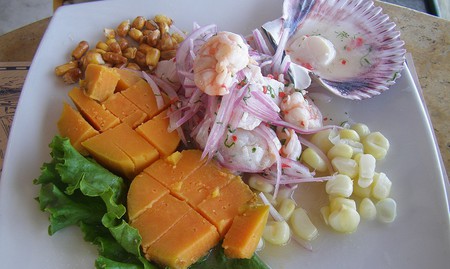 The power of reinvention

Although Peruvian cuisine is a product of cultural fusion, ingredients and cooking methods, the adaptation of traditional dishes to modern cuisine is a result of the gastronomical boom in recent years. Peruvian’s continue to mix everything: from the popular street food Combinado consisting of cebiche, chifa and papa a la huancaina (potatoes covered with ají and cheese sauce), to vanguard cuisine that introduce new textures and flavors, often served in Lima’s fanciest restaurants like Astrid & Gaston.

World’s 5 best restaurants are in Peru

The best Pisco is in Peru

This brandy-like liquor served as a Pisco sour is an excellent appetizer to precede lunch or dinner. Pisco is distilled in southern regions of the country like Moquegua, Arequipa, Tacna and Ica. In fact, in this last region there’s a town called Pisco. There’s an array of varieties that vary in aroma and taste: pisco acholado, italia, mosto verde and quebranta. You can visit some of the best pisco distilleries if you care to leave Lima for a day or two.

Spanish-Peruvian Inca Garcilaso de la Vega wrote in his Comentarios Reales de los Incas (1609) that Peruvians had a long tradition (and obsession) of putting “uchu” (hot sauce), on almost everything they ate. Most Peruvian dishes are currently prepared or eaten with ají. There are five types of cultivated solanum (ají) and they are known by different names like rocoto (pepper), panca y pipi de mono. The preparation of the ají sauce differs according to the region and the ingredients mixed with it.

Potatoes are tubers native to Peru. Out of the 5,000 varieties that exist in the world, you will find 2,694 in Peru. These potatoes come in all shapes, colors and textures. Peruvians eat potatoes with almost every other dish and their devotion to the vegetable is so strong they even have their own national day: May 30. 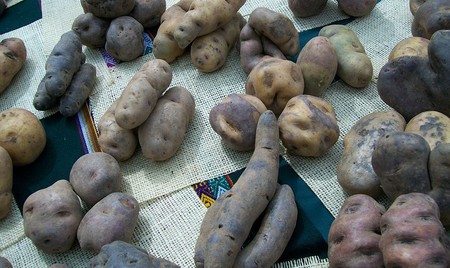 Ancient Peruvians discovered healthy eating way before colonization began, they knew the nutritious advantages of eating quinoa, potatoes, corn and other superfoods (they wouldn’t have been able to build Machu Picchu or other wonders otherwise). While visiting Peru you can also discover other healthy organic products not too well known outside of the country like camu camu (containing more vitamin C than lemon) or the energy-giving maca and yacon.

Celebrated every September, Mistura is Peru’s greatest gastronomical festival, showcasing the best of Peruvian cuisine. Anyone foodies visiting Peru, should experience at least one day at Mistura: restaurants from all over the country reserve a spot at this important food festival, with its fantastic prestige and exposure.