How the Rainbow Valley Got Its Colors 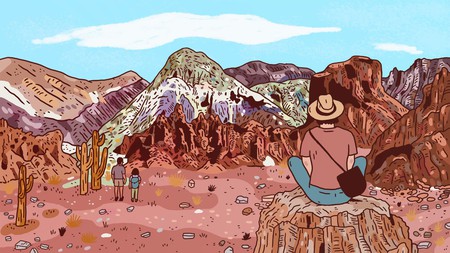 There’s a story in every grain of sand in Chile’s Atacama Desert. And for some of the stones that make up the colors of the Rainbow Valley, theirs is a 250-million-year-long saga. Here’s an abridged version of the tale. 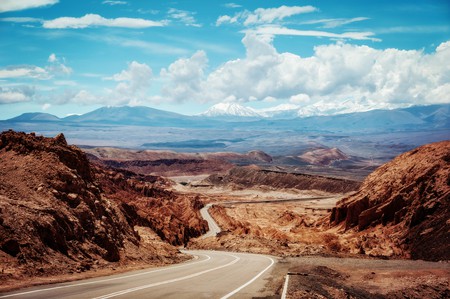 The Atacama Desert is home to the Valle del Arcoiris, a collection of multicolored geological formations | © Lukas Bischoff / Getty Images

The rocks in the Atacama Desert are stone-cold survivors. They have had front-row seats to three mass extinctions – including the ‘great dying’, which wiped out 96% of all living creatures on Earth. They’ve been battered by astrological objects, at a rate of about 222 meteorites every 1 million years. And more recently, they have been cracked open for metals and minerals – like copper, salt and lithium – a process that wreaks havoc on local wildlife and ecosystems.

But amid all the protracted drama, played out over hundreds of millions of years, there is one valley that has somehow – against all the odds – managed to escape unscathed. While other geological formations bear the scars of earthquakes, volcanic eruptions and mining activities, the Valle del Arcoiris got colors instead.

Nestled among the Domeyko Mountains, this collection of colored-in peaks appropriately translates to ‘Rainbow Valley’. There’s a thick buttress of ochre red clay at the bottom, a glimmering strip of chalky white salt in the middle and a generous topping of moss-colored volcanic tuff. 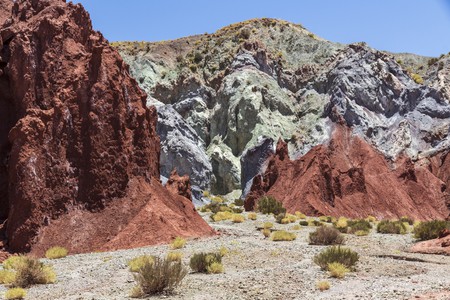 But this certainly didn’t happen overnight. And to understand how the Rainbow Valley got (and kept) its colors, you’d first have to know how they were formed – a story that involves…

Several hundred million years ago, the strip of land we now know as Chile was hidden under a shallow ocean. Buried beneath that, around 900 miles (1,450km) under the Earth’s surface, were two tectonic plates: the Nazca Plate – which sits beneath the Pacific Ocean – and the South American Plate. And still further down than that was a soup of hot jelly.

So we have two tectonic plates moving around on a mass of flaming hot, gelatinous soup, which is kind of like having two dinner plates perched on a gigantic mound of wobbly Jell-O. With the two tectonic plates rubbing up against one another, refusing to stay in place, we have all the makings of an imminent geological disaster, one that would soon create…

The Cordon de Lila, the hills that sparked a very big chain reaction

Around 200 million years ago, the Nazca Plate started to squeeze beneath the South American Plate. This process – called subduction – created enough friction and heat to melt the outer layers of rock into magma. With this freshly molten layer of rock, these two tectonic plates had unwittingly been entrusted with a new role. Their job now was to prevent a gas-propelled mass of incredibly hot magma from erupting.

These plates did not do a good job of being magma lids (and they still don’t, given Chile’s reputation as an earthquake hotspot). So some of this piping hot substance escaped to the surface, creating the Cordon de Lila (“Lila Hills”), which sit just south of the Rainbow Valley. 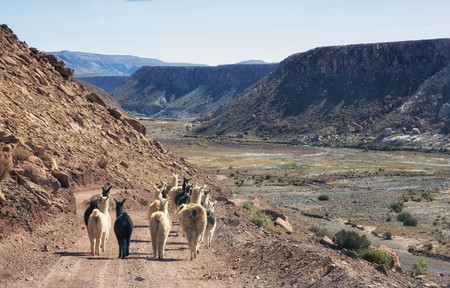 Nestled within the Domeyko Mountain Range, the Rainbow Valley sits east of the Cordillera de la Costa and Intermediate Depression, and west of the Andes | © Elisabeth Pollaert Smith / Getty Images

In the wider scheme of the Rainbow Valley’s several-hundred-million-year creation story, this eruption was more of a small, isolated hiccup than a big, prolonged belch. It wasn’t particularly destructive. Nor were the resulting hills impressively big. And for a very long time after that, nothing happened. But this was just the prologue to something much bigger – an enormous eruption that would create…

The Cordillera de la Costa, the Salar de Atacama and the beginnings of the color red

The chain of events that led to the creation of the Salar de Atacama (“Atacama Salt Flat”) began 200 million years ago with an enormous eruption that created the Cordillera de la Costa (“Coastal Mountain Range”). As they rose up above the ocean waves, their peaks pierced through the South Pacific and formed the western coast of what would eventually become Chile.

In the process, some of the water got sectioned off and sloshed eastward. To use another crockery-related analogy, the western Cordillera de la Costa and southern Cordon de Lila now formed a kind of half bowl with some of the South Pacific Ocean in it. And in the several hundred million years to follow, this container of ocean ingredients would play a key part in creating many of the Salar de Atacama’s precious compounds, including lithium and copper – as well as the color white. 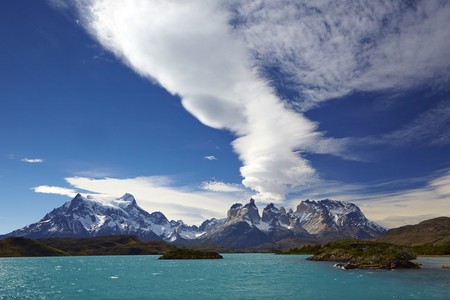 When the Cordillera de la Costa was created, it emerged from the Pacific Ocean floor and formed the western coast of the land we now know as Chile | © Rudi Sebastian / Getty Images

In the making of the Coastal Mountain Range, bits of rock and ash splintered off, and some of these bits traveled west toward the area that would eventually become the Valle del Arcoiris. During their several-million-year-long journey, they would become eroded into fine, dust-sized specks of clay. And the iron in these rocks (through oxidation) would transform into the first color of the Rainbow Valley – red.

How magma made the Intermediate Depression and Domeyko Mountain Range

Eventually, the exits of the Cordillera de la Costa closed up and the flow of magma that had formed these coastal peaks no longer had anywhere else to go. For 50 million years, this magma was trapped underground – unable to erupt to the surface – building up more and more pressure. Since it couldn’t escape to the exterior, this pressurized death soup traveled west instead.

The Domeyko Mountain Range is considered a part of the Andes, though it’s actually much older | © Igor Alecsander / Getty Images

Then, 150 million years ago, this molten rock erupted to create the Intermediate Depression (a separate range that runs parallel to and between the Cordillera de la Costa and the not-yet-formed Andes). But then the same thing happened again; this time, the Intermediate Depression’s exits got clogged up, and so the magma went back underground and traveled even farther west. Then, for the third – but not last – time, the magma managed to escape to become the Domeyko Mountain Range, home to the Rainbow Valley.

All that ocean water that had been pushed east for over 50 million years – first by the Cordillera de la Costa, then by the Intermediate Depression and finally by the Domeyko Mountain Range – had finally found its resting place in the Salar de Atacama.

How climate, time and a giant bowl of Pacific Ocean water created the color white

At this point, the Salar de Atacama was effectively a giant half bowl; its rim made up of the Domeyko Mountains to the west and the Cordon de Lila to the south. Water that had traveled from the Pacific could now finally rest in the Salar. And for the next 150 million years, climate fluctuations would transform these salts, sediments and minerals into the second shade of the Valle del Arcoiris’ rainbow-colored exterior – white.

During this time there were periods of intense rainfall followed by very long droughts. When the rains came, they swept chemical elements from the tops of volcanoes and carried them down to the Salar de Atacama. And then when the dry spells evaporated this water, they would combine with some of the existing chemical elements to form white salts. 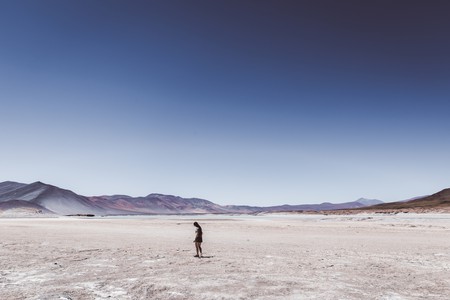 This oceanic soup of chemical elements contained, among other things, grains of calcium – from the erosion of seashells – which then combined with the sulphur from the volcanoes to create gypsum. This white substance, along with sodium chloride, forms the second layer of the Valle del Arcoiris. Which leaves us with just one missing piece of the rainbow-colored puzzle – green – which would only be formed 137 million years later with the very violent explosion of…

In the many years that followed, the magma that had gotten trapped underground built up more and more pressure. For 137 million years, it had been itching to escape to the surface.

Then, around 13 million years ago, it found an exit in the form of La Pacana, a kilometer-wide mega volcano that spelled the beginning of the Andes. The resulting eruption was so violent that chunks of the volcano itself blew up in the process. 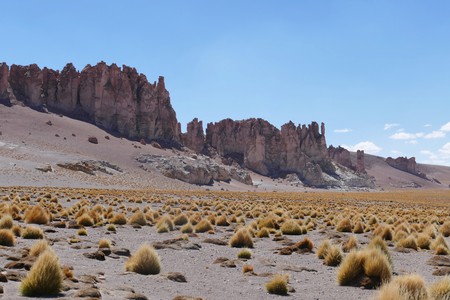 This was a thick, dense magma – the type that barely even flows. And when this type of magma blows up, it makes a very big fuss. Tons of hot lava, rock and volcanic ash were sent flying for miles in every direction, wreaking havoc of biblical proportions.

Some of this burning hot soup landed on the Valle del Arcoiris and transformed into moss-colored tuff. How? The green hue of the Valle del Arcoiris comes from 9.3 miles (15 kilometers) deep underground. At this depth, magma contains magnesium and iron, which starts to bond with other chemical elements (like cobalt and sulfur) as it comes up toward the surface. When the Andes spat out this magma, these elements reacted rapidly with the oxygen in the air, which turned it into the color green.

How the Valle del Arcoiris kept its colors

Green-colored rocks can sometimes be associated with copper, but the Valle del Arcoiris is one area of the Atacama Desert that is mostly devoid of this money-making metal – a blessing in disguise. While other areas have been hollowed out for their precious stores of copper and lithium, mining companies had no interest in digging into the Rainbow Valley. 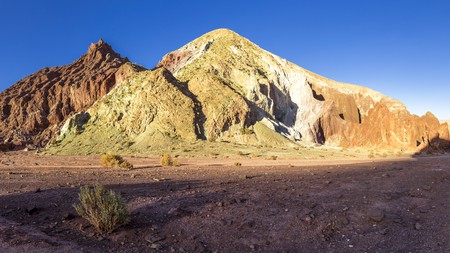 The Valle del Arcoiris is financially worthless. And it’s for this reason that we are still able to marvel at its majestic multicolored peaks.