The Top Things To Do in Ubatuba, Brazil Beyond Surfing 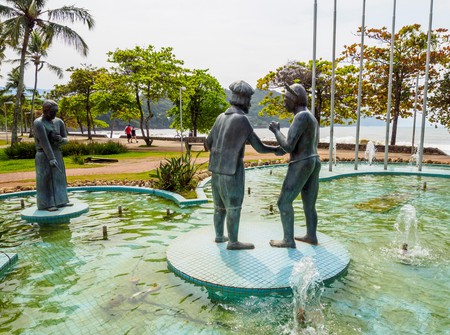 Known as surfers’ favorite spot in southeast Brazil, sitting between Rio de Janeiro and São Paulo and surrounded by one of the best-preserved areas of the Atlantic Forest, Ubatuba offers endless opportunities for beach holidays and days spent exploring the coast. Largely considered a new top destination, the city is the perfect vacation spot for everyone, even for those less interested in riding the waves.

Considered one of the best in South America, Ubatuba Aquarium was created by a group of oceanographers in 1996 to educate the population about protecting marine life along the coast and other endangered species. Housing one of the biggest marine tanks in Brazil, the aquarium offers a variety of attractions for visitors, including several contact tanks where you can touch animals such as sea stars and urchins, and a penguin area where you can watch the fascinating aquatic birds and sometimes even feed them. Next to the site, Praça da Baleia (Whale Square) hosts a whale’s skeleton, which was reconstructed during a project run by the aquarium with local schools eight years after a humpback whale died on the shores of the city.

Just next to Ubatuba Aquarium, colorful stores line Guarani street, offering everything from the best of beachwear and surf kits to delicious cafés, restaurants and ice cream parlors where you can rest after the shopping spree. Among these, hidden in a small square, Madallena Café offers a quiet retreat with special coffee delicacies including its famous Nutella coffees. 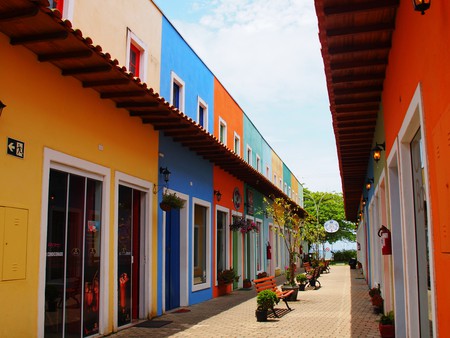 Brazilian non-profit Projeto TAMAR (TAMAR Project) has been working over the past 40 years along Brazilian coasts to prevent the extinction of sea turtles. The experts working on the project hatch endangered turtle eggs and protect them until the baby turtles can be safely released in the sea. With 22 bases around the country, the organization helped and released over 8 million turtles in the sea over the years. Ubatuba TAMAR site, which educates people on how to respect and protect marine wildlife, receives over 100,000 visitors per year coming to observe the various species of marine and terrestrial turtles living in five tanks and five terrariums. Visitors can also take part in the guided tours and organized interactive activities organized, including the feeding of the turtles every day between 4pm and 5pm.

Perfect for rainy days in Ubatuba, the Automobile Museum hosts a selection of over 120 cars rotating in its main exhibition space. Some of the oldest vehicles date back to the beginning of the 20th century, such as a Chrysler 1929 Roadster and a 1928 Fiat 520 Sallon. The latter of the two was awarded several prizes for its perfect conservation and was also used in the famous Brazilian soap opera Esperanza. The collection also includes motorcycles, bikes and historical cars’ parts.

Handcrafts lovers will find plenty of artisans’ shops and boutiques to satisfy their thirst for local crafts and hunt the best bargains to bring back home. Some of the best shops in the center are Kasarão 66 Artesanato, Art Sea Lellis and Apuí Artesanato. And if these aren’t enough, the Ubatuba Handcraft Fair, locally known as Feirinha, is located in the center of town near Iperoig Avenue and Iperoig beach. Craftsmen put up their tents every morning creating a covered pathway to welcome clients even on rainy days. The fair offers all kinds of handmade products: jewelry, clothes, decorations, ornaments and souvenirs.

Stepping out of the city center, Ubatuba offers over 100 beaches to explore, swim, play and sunbathe. Even for those not interested in surfing, watching professionals and novices trying to ride the waves can be really spectacular. Hundreds of kiosks and restaurants have popped up along the coast offering deckchairs, parasols, food and fresh drinks to the crowds of visitors hitting the beach at all times during the year. Praia das Toninhas, Praia Grande and Praia Maranduba are some of the best beaches on the coast. 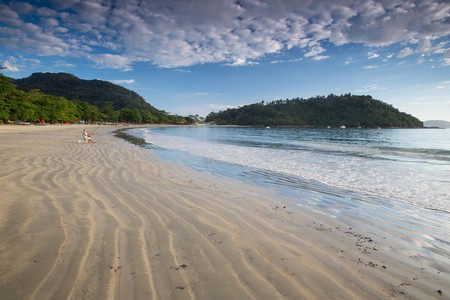 Boat tours are a must in Ubatuba, with several departure times every day from the pier at Itaguá and from the nearby beaches of Enseada and Maranduba among others. Ilha Anchieta natural reserve is a popular destination where tourists can enjoy stunning views of the coast and observe fish and birds in their habitat. Make sure to bring a mask to make the most out of the perfect snorkeling spots you will certainly be hitting during the boat trips. For the most adventurous, Ilha Anchieta also hosts the ruins of an old prison dating back to 1902. A riot started inside the jail in 1952, leading to its closure and transforming the island in an abandoned paradise.