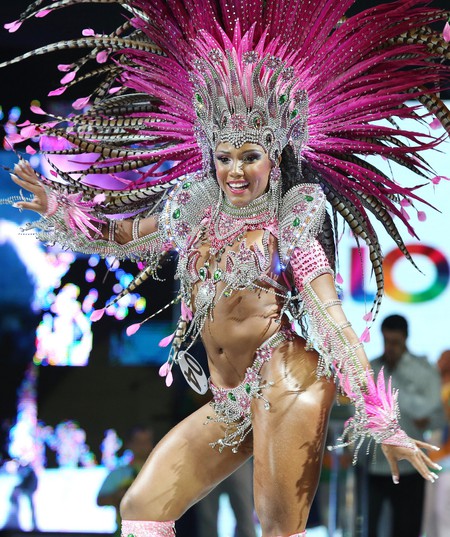 As the samba school enters the Sambódromo, the audience sees a flawless performance of furious samba dancing, dazzling costumes and jaw-dropping floats. What they don’t see is the anxiety and determination of the Queen of the Drummers (Rainha da Bateria), the near-naked women who individually represent their respective samba school and perform in the hope of winning the elusive title of Carnival Queen.

The main carnival parade is made up of several samba schools competing for the title of the best samba school of the year. Each school centers their performance around a chosen theme that is acted out through a team of musicians, samba dancers and elaborately decorated floats after months of preparation. The most important dancer of each school is the Queen of the Drummers, who leads the musicians setting the tone and pace of the school with the beats of their huge steel drums. 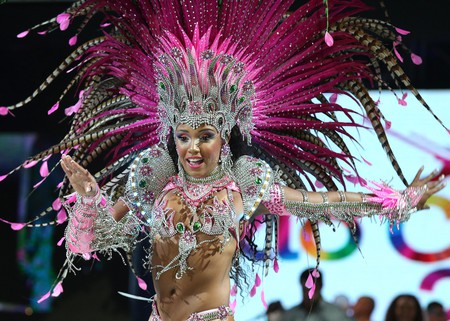 The Queen of the Drummers are young, physically fit and picked for their beauty and charisma. These are the dancers that the world is famously used to seeing from Brazil’s carnival – beautiful women with barely-there bikinis, high heels and glorious headdresses, known to be the world’s best samba dancers. In the months leading up to the carnival, the dancers undergo intensive training and exhausting schedules. Daily workouts and dance rehearsals are the norm, in addition to meeting media expectations including photoshoots, TV appearances and interviews.

Many of the dancers are models or actresses, their beauty, charisma and popularity an important tool in promoting the samba school. They become media stars of the moment, with national newspapers constantly reporting the dancer’s ‘secrets’ of dieting and exercising. Some past samba dancers are former Miss BumBum winners, the competition held every year in Brazil that searches for the nation’s best female butt. Here are some of this year’s Queens of the Drummers.

Sabrina Sato, aged 36, is a Brazilian comedian and TV personality, gaining fame from an appearance on Brazil’s Big Brother. She will perform for samba school, Vila Isabel.

Monique Alfradique, 30, is a Brazilian actress. Having started her career when she was just five years old on a TV show for children, she has found fame in a series of TV programmes, soap operas and plays. She will perform for Grande Rio samba school at this year’s Rio carnival.

Viviane Araújo, at 41-years-old, is a model, actress and reality TV personality, having starred in Brazilian reality show The Farm. She is also well-known as the Queen of the Drummers for the samba school Salgueiro.

Raissa de Oliveira, is a 26-year-old journalism student and a samba dancer. She represents Beija-Flor and was chosen as their Queen of the Drummers when she was just 12-years-old. She won the post in a competition and has represented the school every year since.

Renata Santos is famous as being the Queen of the Drummers for samba school Mangueira. She began her training for this year’s carnival in August 2016.