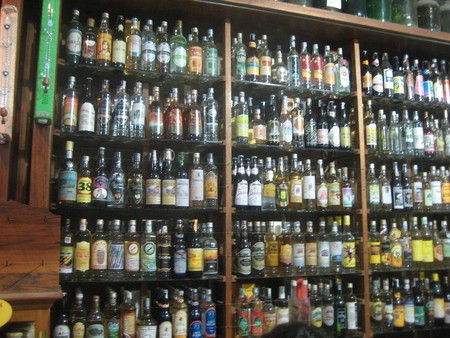 There are many brands of cachaca |© Harry Wood/Fickr

Made from sugarcane juice, cachaça (cash-ass-a) is Brazil’s national spirit and is ubiquitous across the whole country. Coming in two main varieties – unaged (cachaça prata) and aged (cachaça ouro) – the drink can be found anywhere in Brazil, from bars and grocery stores to bakeries and newspaper stands. With a taste not dissimilar to rum, cachaça is cheap and delicious as well as being the backbone of the famous Brazilian cocktail, the caipirinha. While the state of Minas Gerais and the Rio de Janeiro city of Paraty claim to be the home of cachaça, it is incredibly popular in São Paulo, with its cooler temperatures and thriving nightlife. Here are some of the best cachaça bars in the city.

Bar, Pub Grub, $$$
Facebook
Email
Twitter
Pinterest
Copy link
Share
Map View
With a name that translates literally as ‘Chat, Cachaça and Snacks’ (pinga is a local nickname for the drink), Papo, Pinga e Petisco is a great place to kick back with some friends and sample some delicious cachaça. Located on the hip Praça Roosevelt in the center of São Paulo, PPP and its neighboring bars attract a vibrant, trendy crowd every weekend.

The bar offers seating inside and out, while the interior is decorated with antiques and has a cozy, intimate feel. In the back, there’s even a small second-hand shop selling books and records. Their cachaça selection is impressive, with around 40 different varieties. Try the Nega Fulô, which is a delicious cachaça aged in oak barrels, or the Canarinha, which is aged with Brazilian amburana wood.

Bar, Grocery Store, Brazilian, $$$
Facebook
Email
Twitter
Pinterest
Copy link
Share
Map View
Originally a second location of a much larger bar and emporium to the north of the city (which has since closed), Empório Sagarana is an unpretentious little bar in the hip neighborhood of Vila Madalena and is an excellent place to get into a serious relationship with Brazilian cachaça, your new-found love. With a rustic and simple decoration, Sagarana is a cool spot to sit with friends to enjoy an evening tipple.

While also specializing in craft beer, Sagarana has an excellent selection of cachaças, with some varieties which are particularly hard to find in São Paulo. Don’t miss the Paratiana (either the aged or unaged versions), an award-winning cachaça from the city of Paraty, which stakes its own claim to be the birthplace of the national drink.
Open In Google Maps
271 Rua Aspicuelta, Alto de Pinheiros São Paulo, 05433-010, Brazil
Give us feedback

Located in the upmarket neighborhood of Vila Olimpia, Bar do Arnesto is always full on the weekends with live music, big screens and plenty of cachaça. They also offer a nice selection of cachaça-based cocktails for those who are fed up with caipirinha after caipirinha.
Open In Google Maps
207 Rua Ministro Jesuíno Cardoso, Vila Nova Conceição São Paulo, 04544-050, Brazil
+551138489432
Give us feedback

Bar, Pub Grub, $$$
Facebook
Email
Twitter
Pinterest
Copy link
Share
Map View
Although slightly out of the way in relation to most of São Paulo’s famous bars and restaurants, Terra Nova Cachaçaria, located in the neighborhood of Tremembé and close to the Cantareira national park, is well worth the trip. Inside a refurbished ranch house, Terra Nova has a very authentic and old-fashioned feel, serving excellent food and even better cachaça.

Terra Nova offers over 400 varieties of cachaça, including a beautiful selection of their own aged and infused brands. Each of the house spirits is aged in a different type of wood, allowing you to experience many unique flavors that are hard to find elsewhere. Of the infused cachaças, a favorite of the clientele is the Jabuticaba, which is a delicious purple berry native to Brazil.
Open In Google Maps
550 Rua Maria Amália Lopes Azevedo, Tremembé São Paulo, 02350-000, Brazil
+551129967000
Visit Website
Give us feedback

Bar, Restaurant, Brazilian, $$$
Facebook
Email
Twitter
Pinterest
Copy link
Share
Map View
With locations all over the south and southeast of Brazil, Água Doce is synonymous with cachaça in these parts of the country. Based in the city of Tupã, to the northwest of the state of São Paulo, Água Doce produces a number of cachaças sold nationwide and the best place to try them is at their bar in the swanky neighborhood of Moema.

The food is decent but a bit pricey, though they definitely make up for it with their selection of cachaças. The aged varieties are separated on the menu by the type of wood barrels they were aged in, allowing you to order a few different shots and become a proper cachaça connoisseur. They also offer a bunch of interesting cocktails, opening customers up to the versatility of cachaça.
Open In Google Maps
655 - Indianópolis Av. Macuco, São Paulo - SP, 04523-000, Brazil
+551150561615
Visit Website
Give us feedback

Bar, Brazilian, $$$
Facebook
Email
Twitter
Pinterest
Copy link
Share
Map View
While it is one of the best-known bars in the neighborhood of Pinheiros, Bar das Batidas is rarely called by its original name and is instead infamously referred to by locals as the ‘Cu do Padre‘ – the Priest’s Asshole. The bar earned this colorful nickname as it is situated at the *cough* rear end of the local Catholic church. Names aside, the Cu do Padre is a São Paulo institution, always busy on weekday happy hours and packed at the weekends.

Though it isn’t typically a cachaça bar, Cu do Padre has a good selection of the national spirit, as well as stocking the delicious Gabriela cachaça, which is infused with honey, cinnamon and cloves. Sipping it straight may be slightly too sweet for some, so order it in a Jorge Amado cocktail, where the Gabriela is mixed with fresh passion fruit. This is truly one of Brazil’s greatest cocktails, and what better place to try it than from inside the Cu do Padre.
Open In Google Maps
799 Rua Padre Carvalho, Pinheiros São Paulo, 05424-090, Brazil
+551128560927
Give us feedback

Restaurant, Brazilian, $$$
Facebook
Email
Twitter
Pinterest
Copy link
Share
Map View
As well as being an excellent place to try some incredible northeast Brazilian food, with its vibrant colors and delicious spices, Rota do Acarajé is also a specialist in cachaça. The decoration of the restaurant is inspired by the rustic eating and drinking spots you’ll find in the northeast, meaning everything looks a bit improvised and thrown together at the last minute, but this is part of the charm.

Go there in a group at the weekends, order a bunch of their traditional (and excellent) Bahian dishes and then relax with a couple of Rota do Acarajé’s countless varieties of cachaça. The staff are all friendly and helpful, being happy to explain the differences between each type of cachaça and help you order one to fit your tastes. It can be a bit expensive, but only in relation to some of the cheaper places in the nearby popular neighborhood of Santa Cecilia. You’re guaranteed to walk (or stagger) away satisfied.
Open In Google Maps
529/533 Rua Martim Francisco, Vila Buarque São Paulo, 01226-001, Brazil
+551138253984
Visit Website
Give us feedback

Tucked away in the typically East Asian neighborhood of Liberdade is a little piece of the Brazilian northeast, Recanto do Nordeste. If you’re looking for some traditional forró music played live, proper northeastern food, a lively atmosphere and some great cachaça, this is the place for you.

An excellent choice for a Friday night dinner, go there in a group, eat some delicious food before sampling some cachaças and hitting the dancefloor. You can’t expect anything less from Liberdade, a part of São Paulo which really knows how to have fun.