Casa Villarino | ©Alexandre Macieira | Riotur/Flickr
Whereas the likes of Copacabana and Ipanema in the south of the city embrace a cosmopolitan vibe, Centro clings onto its Brazilian past. Many of the bars were built in the first half of the 1900s and haven’t changed a whole lot since. Their loyalty to traditions provides a snapshot into a truly Brazilian experience and sets the scene for a great night out.

Located near to Pedra do Sal, the square famous for hosting live samba music on Mondays and Fridays, Angu do Gomes is an ideal pit-stop for pre-drinks or simply to spend a pleasant night mingling. It is one of the most traditional botecos (Brazilian bars) in Centro and has long been associated with serving traditional food inspired by Brazilian street stalls. Highlights on the menu are the pastels which come with cheese, chicken, dried meat, or sausage fillings. 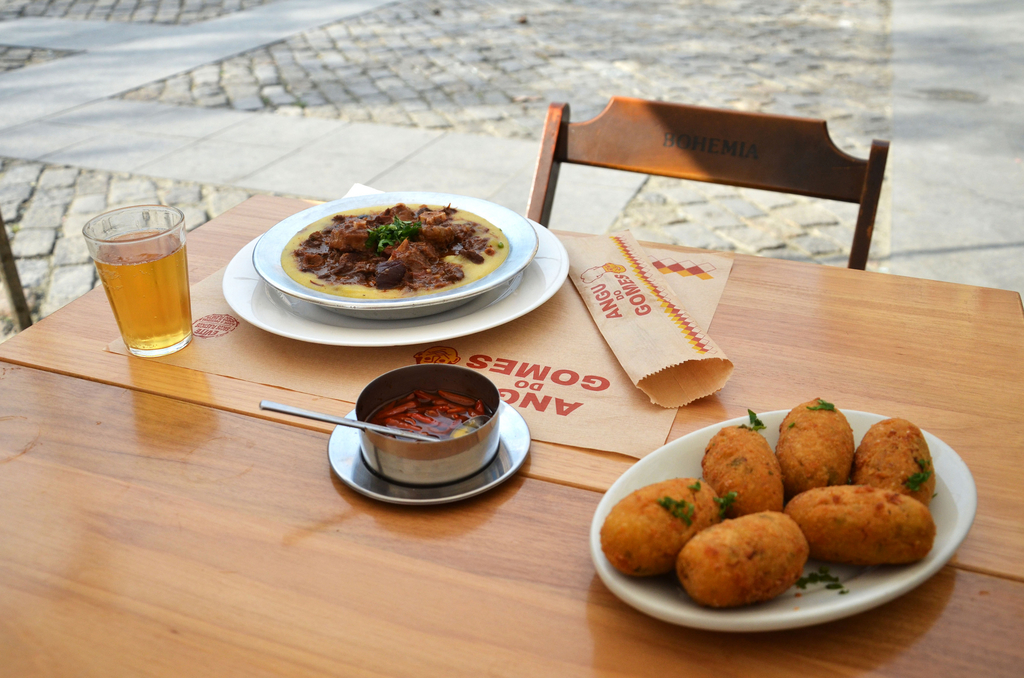 Bar, Restaurant, Brazilian, $$$
One of the few ‘new’ bars in Centro – Bar do Gengibre opened in 2015 – this bar bundles together the expertise and knowledge of owner, Antonio Rodrigues, under one roof. Rodrigues is one of the partners of the chain Belmonte, a successful group of botecos. House specialties include a blended ginger juice, roasted chicken cooked in the traditional spit-roast way, and marinated octopus. It is located near to the Centro Cultural de Banco do Brasil (CCBB), Praça XV, and Paço Imperial, providing plenty of cultural and architectural attractions nearby.
More Info
Open In Google Maps
10 Rua Visconde de Itaboraí, Centro Rio de Janeiro, 20010-060, Brazil
+552122631484

Bar, Restaurant, Brazilian, German, European, $$$
Bar Luiz | ©Alexandre Macieira | Riotur/Flickr
One of the oldest and most traditional bars in Rio, Bar Luiz opened in 1887 – before slavery was abolished in Brazil and before the proclamation of the republic. In those days, the bar was located on Rua Assembleia in Centro before moving to its current location in 1927 under the name of Bar Adolfo. In the 1940s, it changed its name to Bar Luiz after a group of students threatened to destroy the bar during a protest against fascism. The bar was originally opened by a German immigrant whose national gastronomic preferences continue to influence the menu with options such as potato salad, kassler, and German sausage.
More Info
Open In Google Maps
39 Rua da Carioca, Centro Rio de Janeiro, 20050-008, Brazil
+552122626900
Visit website

Bar, Pub Grub, Brazilian, $$$
Casa Paladino | ©Marina Herriges | Riotur/Flickr
The tiled walls and high-rise shelves which pack row after row of spirits and beers give Casa Paladino a homely feel. It opened in 1906 and it seems like not a lot has changed in the last century, yet that is not a bad thing at all – in fact, it is the main appeal of this bar. The lunch hour during the week gets busy as Centro’s workers pile in to enjoy Casa Paladino’s famous sandwiches and omelets.
More Info
Open In Google Maps
224 Rua Uruguaiana, Centro Rio de Janeiro, 20050-092, Brazil
+552122632094

Bar, Deli, Restaurant, Brazilian, $$$
Casa Villarino | ©Alexandre Macieira | Riotur/Flickr
Opened in 1953, this deli-bar mix is known for its place in an important part of musical history. In 1956, Vinicius de Moraes and Tom Jobim performed here, leading to a long music partnership between the two and the eventual production of the famous song, The Girl from Ipanema. The tiled floor and marble-topped table brings the past to the present and creates a casual, homely feel.
More Info
Open In Google Maps
6 Avenida Calógeras, Centro Rio de Janeiro, 20030-070, Brazil
+552122401627
Visit website

Built in 1943, Galeto Liceu maintains a retro ambiance with aging tiled walls and a zig-zag counter. Here, it’s all about extra cold beers and traditional Brazilian food in a casual, simple setting. The most famous item on the menu is the spit-roasted chicken, yet there are other options including fish and meat choices. It is located near to the Municipal Theater and the National Museum of Fine Arts making it an ideal spot to eat and drink after an afternoon of cultural activities.

Imaculada Bar e Restaurante is a hybrid venue of restaurant, bar, and art gallery. It is a relatively recent addition to Centro’s drinking scene having opened in 2010. The beers are served as chopps, which are small glasses of extra cold Brazilian beer and complement the typically Brazilian food on the menu, including the local speciality of chicken hearts. The venue regularly hosts entertainment evenings such as impromptu live samba acts and bi-monthly art exhibitions.