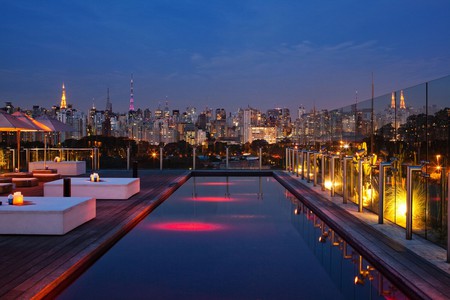 The region of São Paulo known as Jardins (made up of the neighborhoods Jardim Paulista, Jardim América, Jardim Europa, and Jardim Paulistano) is the fanciest and most exclusive part of the city. Its leafy, hilly streets are lined with some of the city’s best restaurants and clothes stores, as well as some very swanky mansions and hotels. Unsurprisingly, it is also home to many of São Paulo’s trendiest bars. Here is our selection of the 10 best Jardins has to offer. 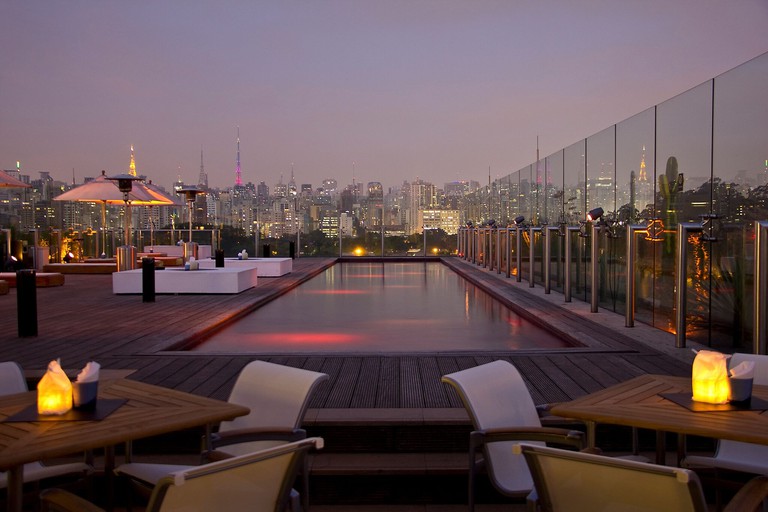 One of the best spots in Jardins is Skye, located on the rooftop of the stunning Hotel Unique. With a stylish design (check out the red swimming pool, pictured) and breathtaking 360 degree views of São Paulo, Skye is not to be missed. Grab a seat on one of the white loungers beside the pool, order one of the myriad cocktails on offer and look out upon the gigantic city around you.

Skye also doubles up as a restaurant, led by renowned chef Emmanuel Bassoleil, who serves up some incredible fusion food, blending Brazilian, French, Italian, and Japanese ingredients and techniques.

Sat atop the Transamerica Prime International Plaza, just one block from Paulista Avenue, The View boasts of having, you guessed it, the best view in São Paulo. Indeed, at 30 floors up, it’s hard to argue with that claim. The spacious bar is elegantly decorated with beautiful, comfortable armchairs, while the terrace is a must-see on clear nights. While also serving a selection of tasty canapés and a dinner menu that is worth trying, The View is best experienced as a bar. So grab a cocktail, or a glass of champagne, and enjoy the stunning urban landscape around you. 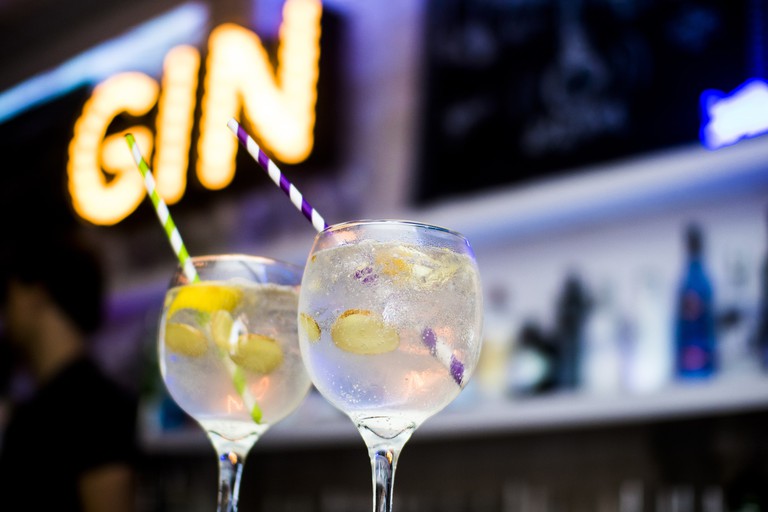 As the first bar devoted entirely to gin & tonic in São Paulo, G&T has quickly become one of the most popular spots in Jardins. Initially planned to run for only three months as a pop-up bar, the establishment was so successful that it became permanent and has now been open for 18 months. While the front of house is not particularly eye-catching (if it wasn’t for the constant crowd of customers hanging out in front, it could easily go unnoticed), the interior is trendy and atmospheric, designed by the same people responsible for the design of Myk and Kouzina, the two Greek restaurants nearby.

The menu offers four classic cocktails for R$20 (USD$6) each (gin & tonic, dry martini, gin fizz and negroni), as well as a dozen of G&T’s signature cocktails, which each go for R$25 (USD$7.50). For the true gin connoisseur, they also have a huge selection of gin from around the world, each with their own particular accompaniments, such as the Martin Miller’s, served with juniper, cardamom, lemon, and lime (R$55, USD$16.50).

Located above Chez Oscar, a delightful café/restaurant on the super-fancy Rua Oscar Freire, is Grupo Chez’s latest venture—Bar de Cima. Attracting a trendy, sophisticated crowd, the bar has a two beautiful spaces spread across two floors, both with large glass windows and classy lighting. The bar also doubles up as a nightclub, with an upstairs dance floor and good music. 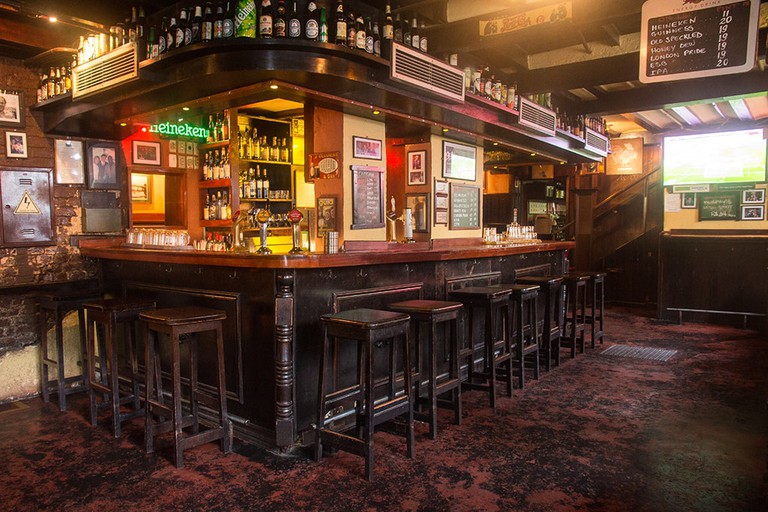 No matter where you go in the world, you are never very far from an Irish-themed pub. São Paulo is no exception to this rule, and O’Malley’s Bar in Jardins is the city’s most popular pub. With everything you’d expect from an Irish pub this side of the Atlantic—Guinness on tap, plenty of beers from the British Isles and some decent pub grub—you know what you’re getting at O’Malley’s. With a clientele mixed between homesick gringos, enthused locals and British tourists looking for a place to watch the football, it is a decent central meeting spot for people coming from out of town. And the Guinness isn’t bad either.

Balcão is one of the few alternative hangouts in the typically trendy, upmarket Jardins. Known for its interesting design (Balcão has no tables, only one long meandering bar that snakes across the room) and décor (it has plenty of interesting art pieces on the walls, including an original Roy Lichtenstein) Balcão is where the artsy, bohemian crowd in Jardins flock at weekends or after work. 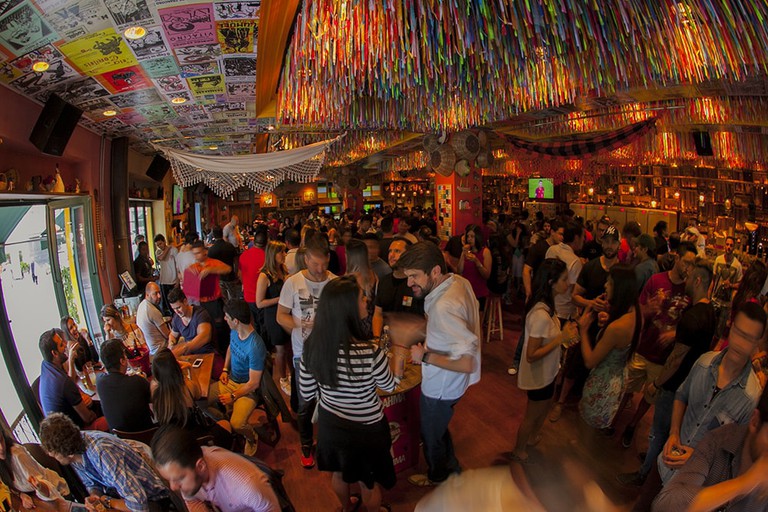 With a few addresses across town, the Tatu Bola Bar at the end of Rua Augusta is one of the most popular spots on any given weekend in Jardins. With live music and waiters circulating the tables bringing ice-cold bottles of beer, Tatu Bola is going for a traditional boteco vibe but with an upmarket twist. Their menu is extensive, with their varied fruit caipirinhas among the most popular order. Tatu Bola is also the proud winner of Veja magazine’s “Best Bar for Flirting” award.

In a typically chic neighborhood, 1101 Bar subverted the style somewhat when it opened at the end of 2016 as a trendy dive bar. While it does serve some boteco classics, as well as cold beer and cachaça, 1101 remains pretty fancy. Grab a table in their open-air terrace area, order a cocktail and watch Jardins go by. 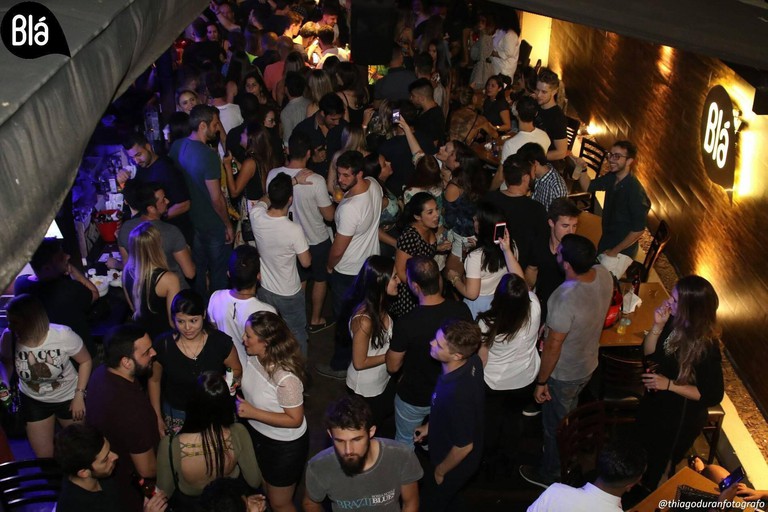 An interesting mix between bar, restaurant, and fancy nightclub, Blá Bar is a good spot for any time of the evening, for those looking for a chic bar meal, a drink in the classy lounge area, or a place to dance the night away. The weekend program includes a variety of live bands and DJs, as well as broadcasting live sporting events.

If it’s a bit chilly outside, you’re probably not looking for an ice-cold beer or a sparkly cocktail. Let’s face it, you’re really after a glass of wine or two. When in Jardins, look no further than Rubi Wine Bar, two blocks away from Paulista Avenue on Alameda Jaú (fittingly, in the indigenous Tupi-Guaraní language, jaú can mean “let’s drink”). With a cozy décor and an extensive wine list, this is the spot to escape those “harsh” São Paulo winter evenings.