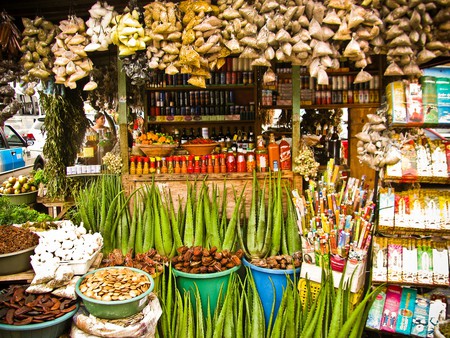 Brazil is a very large, beautiful and diverse country with different climates, music, accents, natural landscapes, and of course delicious cuisines. Brazil’s gastronomy is as famous as its football, reflecting the country’s rich history through the unique dishes formed from the nation’s Indigenous, European, Middle Eastern, Asian and African origins. We reveal the best Brazilian street food treats that visitors can enjoy while travelling around the country. 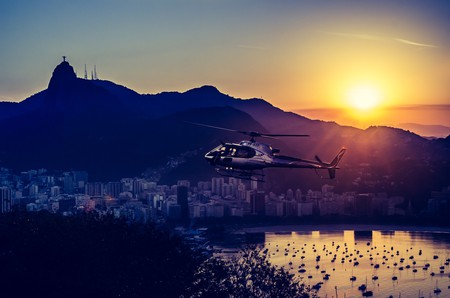 Warm and thick, the caldinho de feijão, or bean soup, is a smaller and simpler version of Brazil’s national dish, the feijoada. In bars, this tasty, cheap and nutritious food comes usually served in coffee mugs. At the beach, vendors, carrying it in thermos jars, sell it to hungry customers. Most types of dried beans can be used to make the soup, but variations are regional as the climate and environment will dictate the type of bean which will be more widely used. In the north east for example, kidney or pinto beans are the most common. However in Rio de Janeiro and nearby states, it is the black bean which will be used. In any case, the soup will taste delicious, whether on the beach, or at the bar when the temperatures drop down. Something to remember however for vegetarians: even a bean soup will have meat in it.

Pastel, a deep-fried pastry with a variety of fillings, is a favourite street food for many Brazilians. It derives from traditional Chinese egg rolls and was introduced by immigrants who had to adjust their cuisine to what ingredients were available on Brazilian soil. However, pastel only became popular when Japanese immigrants arrived during the Second World War, opening up bakeries and taking over the pastel business. Not only are pastéis (pastel in the plural) tasty, they are also made in no time and cost close to nothing. As such, they are best enjoyed in street fairs, especially where the Japanese communities hold the stalls in the city of São Paulo, or in fast-food places called pastelarias. Fillings include chicken, cheese, hearts of palm, ground beef, shrimp, and other vegetables. When ordered in bars, pastéis come by the dozen or half dozen inside little baskets, ideally to be enjoyed by a group of friends while having fun and drinking beer. 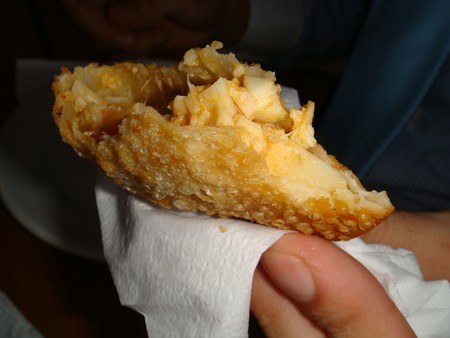 This fried raindrop-shaped goodness filled with shredded chicken meat and catupiry cheese is what Brazilians refer to as coxinha. They are best enjoyed as afternoon snacks or with a cold beer. Some also add ketchup to it, or pimenta, a hot oil. Coxinha is said to have originated in 19th century São Paulo, but different variations of the coxinha are gaining in popularity today. The coxinha mineira from Minas Gerais includes maize as the filling; in snack bars, cheese coxinhas are now also widespread. Homemade versions also include palmhearts, peas, carrots, mushrooms and other vegetables. 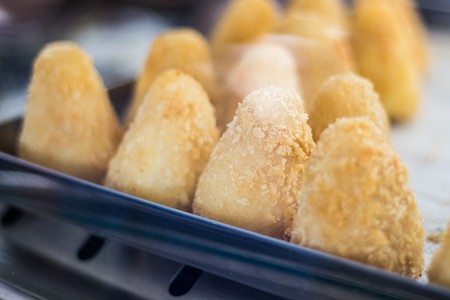 Açai na tigela, or açai in the bowl, is a Brazilian specialty made from the frozen açai fruits that grow on the trees in the Amazon rainforest. Açai is known as a super food, low in sugar but high in antioxidants, proteins, goods fats, vitamins and carbohydrates. In Brazil, it is the surfers’ best friend, giving them the much-needed daily energy boost. The fruit itself has been used by indigenous peoples for centuries now, including for medical purposes. In the north and some parts of the north east, the fruit is still eaten raw and its juice used in various manners including with fish dishes. However, in the south and south east, açai has become a sweet treat. Açai na tigela comes in a bowl, usually with granola, banana, and guaraná syrup. It is most popular in Rio de Janeiro and Florianópolis, but also along the coast in the state of São Paulo and in northeastern coastal cities. It can be found in kiosks along the beach but also in juice bars around the cities. The Brazilian açai bowl is the perfect breakfast treat.

Truly passionate about their bolinho de bacalhau, or little codfish balls, it is said that Brazilians will judge the quality of a bar according to the care that is given in making these snacks. A well made bolinho de bacalhau will be crispy on the outside and creamy inside. Originally Portuguese, the bolinho gained such popularity in Brazil that they quickly became Brazilian. They are often served with fresh lime to be squeezed over the bolinho and a dip, in restaurants and in bars rather than at home. This might be because of the length of the process which requires enough time to soak and de-salt the fish. 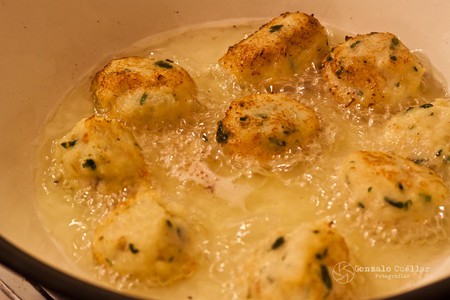 Aipim frito, or cassava chips, is one of the most popular and largely consumed snacks in Brazil. The cassava plant, also called manioc, aipim, yuca and macaxeira, can be found all around the country. Originally, it was used by indigenous peoples as the core of their nutrition, centuries before the arrival of European colonisers. Eventually, Brazilians adopted this versatile and nutritious plant in their cuisine. Brazilians use it in multiple ways, in hundreds of dishes that go from sweet desserts to breads and main courses. One of the popular and easy way to cook it, is by turning the plant into thick crispy chips. The aipim frito makes for a perfect substitute for French fries. 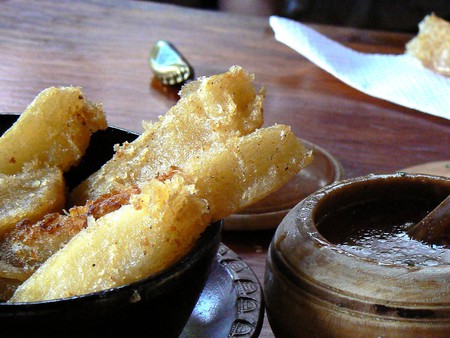 Pão de Queijo, or cheese bread, are very addictive cheesy balls made from cheese and cassava starch which you have either as a snack or for breakfast in Brazil. Freshly baked in the morning, they can be found in bakeries, supermarkets, and snack bars just as often as in the subway stations. They can be enjoyed as they are, or filled with catupiry cheese, doce de leite, goiabada and much more. They are sold by unit or weight and can take different sizes. Starting in the state of Minas Gerais, pão de queijo soon became a country-wide favourite. The largest franchise now, where the pão de queijo always tastes amazing is the Casa do Pão de Queijo. But for the traditional experience, you have to head to Minas. 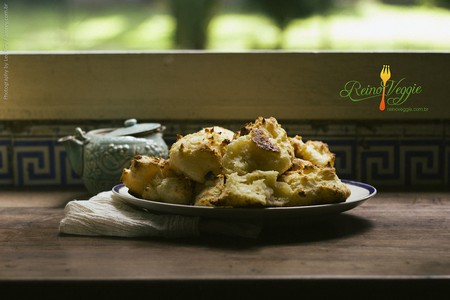 The greatest and most beloved Brazilian sweet, the brigadeiro, is a chocolate bonbon named after Brigadeiro (Brigadier) Eduardo Gomes in the 1940s. When he was running for president, his wife used to cook brigadeiros for fundraising events and everyone used to love them. Today, this is the most popular candy, served at every kids’ birthday party in Brazil and at most special occasions. Brigadeiros are made with sweet condensed milk and chocolate powder, then rolled into balls covered in chocolate granules. A variation of the brigadeiro which will also be served at parties is the beijinho which uses grated coconut rather than cocoa. 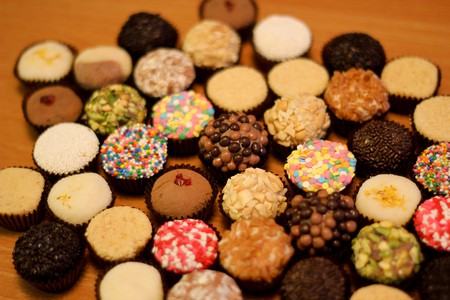 Even though tapioca is now famous worldwide, it was once found only in Brazil. Tapioca is the name given to the starch produced out of cassava from the north east. Cuscuz de tapioca com coco is tapioca couscous with coconut, a mouthwatering sweet dish that Brazilians enjoy usually during Winter holidays, especially in June during the Festa Junina celebrations. The origins of this dish reflect Brazil’s diverse cultural heritage: the first to process the tapioca were the Tupí, an indigenous people of the country. Milk and sugar was only brought much later by the Europeans, but in fact it was the African slaves’ creativity which gave birth to this succulent dish. Cuscuz can now be bought from vendors selling it on the beach, who offer it with an extra touch of sweetness by adding condensed milk.

Kibe (pronounced ‘keebee’ in Brazilian Portuguese) is a typical Middle Eastern dish consisting mainly of minced lamb or beef mixed with bulgur wheat and then fried, baked or eaten raw. Kibe is Lebanon’s national dish, and first generation Lebanese immigrants brought it with them when moving to Brazil, where it quickly became one of the most popular snacks. Food lovers can now find it in restaurants and bars but also in some bakeries and in the typical Brazilian lanchonetes, a type of snack-bar. There are three main kibe recipes, and spellings vary from kibbeh to quibe. The fried variation works best as a snack food that can be enjoyed at any time of the day and at any place. The baked and the raw versions however rather make for a delicious main course.