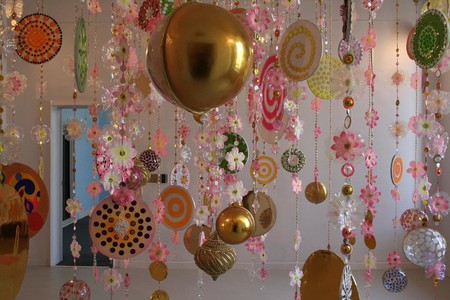 Using various plastic sheets of different shapes and sizes, Beatriz Milhazes glues them to a canvas before slowly peeling them off, painstakingly transforming the blank surface into a series of contrasting patterns and vibrant colors. This self-developed process has made Milhazes the most successful contemporary painter in Brazil, with her works combining bold patterns of floral, stripes and curves, bringing her to be firmly established in the international art scene.

Milhazes is a third generation female artist in the Brazilian modernism art movement that has seen Brazilian women excelling internationally with their masterpieces. Born in 1960, Milhazes graduated in Social Communications at FACHA (Helio Alonso University), Rio de Janeiro in 1981 before enriching her artistic talent in a two-year course at Parque Lage Escola de Artes Visuais (School of Visual Arts), Rio de Janeiro between 1980 and 1982. It was there that her artistic language flourished, enabling her to develop her own style and techniques.

Her works have been described as abstract yet refreshingly new, composed of a blend of Latin American and European collage traditions that also reflect the Brazilian folk references. Her works predominately breathe Brazilian culture, yet Milhazes’s personal passions, such as decorative arts, fashion and geometry come through the many layers of her experimental designs. Milhazes sees art as a way to visualize on the outside our thoughts and feelings. Her attraction to optical reactions has led to works that challenge what the eyes see and inspire debate on underlying meanings, bringing thoughts and ideas to life. She has been influenced by artists Bridget Riley and Tarsila do Amaral, the pioneer of early Brazilian modernism. She also cites Sonia Delaunay, Georgia O’Keefe and Elizabeth Murray as artistic guides — all of which are successful female artists.

Milhazes’ techniques are what have made her work unique and popular. Each artwork she makes takes an enormous amount of time as patterns are slowly built up across the canvas. She makes plastic sheets into the patterns that she wants and then glues them onto the canvas before peeling off to create a specific effect. This process is repeated until the canvas starts transforming into the way Milhazes wants, with varying levels of sheens and contrasts being the most important elements rather than textures. Milhazes has kept and used some of her favorite plastic sheets that she designed herself for the last ten years.

Her work is part of the Brazilian modernism movement beginning in the early 20th century that was represented by two other Brazilian female artists from the last two generations, Tarsila do Amaral and Lygia Clark, both of which sell their works for millions of dollars at auctions. Milhazes herself has embraced her role as the current representative for Brazilian modernism, having sold her painting, Meu Limão, for $2.1million at Sothoby’s auction in New York, making her the highest-priced living Brazilian artist at auction. Since 1995, seven artists have contributed to the top 30 items sold at auction, which include the three female artists of Brazilian modernism.

Nowadays, her works are displayed all around the world with permanent collections in New York’s Musuem of Modern Art, Guggenheim and Metropolitan Museum of Art. The Fondation Cartier Por L’art Contemporain in Paris dedicated a major exhibition of her work between July 4th to 21st in 2009. Milhazes lives in the neighborhood Jardim Botanico in Rio de Janeiro where she continues to paint in her studio there, keeping Brazilian modernism well and truly alive for the next generation to carry its success.