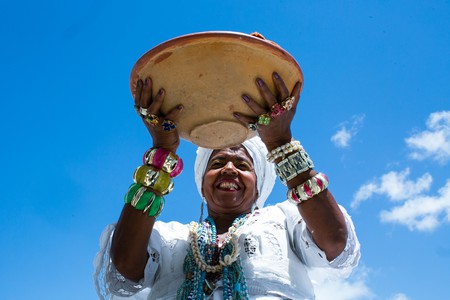 Salvador, located on the north-eastern coast of Brazil, is a city steeped in tradition where a melting pot of cultures and strong African heritage point to its glorious past. The beautiful Baiana de Acarajé traditional clothing, an elaborate costume that Baianas (women of Bahia) proudly wear, offers a colorful example of the city’s rich, cultural heritage. Here’s everything you need to know about Bahia’s treasured costume.

Bahia is known for its wild Carnival parties in Salvador, African-influenced food, and its fierce preservation of traditions that developed from the initial rise of Afro-Brazilian culture. Any visitor to Salvador can’t help but notice the elaborately clad women parading in the Baiana de Acarajé costumes about the praças. But their swishing petticoats are more than just a costume — they are a link to the African history of Bahia. 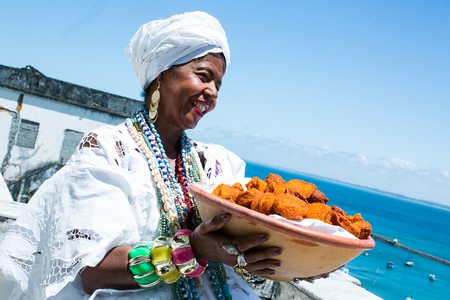 The Baiana de Acarajé traditional dress is a curious blend of ancient European Baroque; with white lace details and multiple layers, while its vibrant tropical jewellery and headress point to its Afro-Islamic roots. Although these may not be the most practical clothes for Bahia’s climate, it’s a look the women of Bahia carry well. The dress consists of the camino, which are white cotton pants worn underneath a long, flowing skirt – a usually white, long, voluminous skirt and a bodice that gathers at the waist and then typically hangs over the top of the skirt.

The traditional look includes the women wearing layered headscarves (also usually white and often made of lace), which is finished off with each woman adding her own signature style to the outfit. An abundance of jewelry: colorful bead necklaces and rings are layered upon the fabric, completed with heavy drop earrings and stacks of bangles. The result is a beautifully adorned woman, many of whom pair their lovely traditional costumes with equally charming smiles. 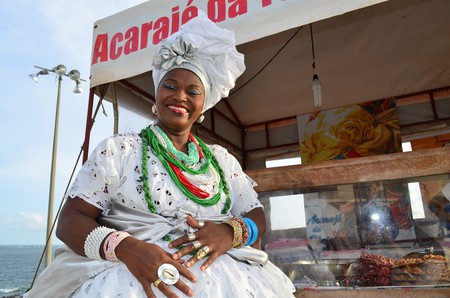 The traditional dress is seen outside of Bahia in a wide range of colors and patterns, but normally the Baianas de Acarajé dress in all white in homage to the Afro-Brazilian religion of Candomblé. Although Catholicism is still a popular religion in Bahia because of the Portuguese rule and influence, Candomblé plays a significant part in the north-eastern culture of Brazil where many are of African descent. Candomblé was a way for slaves to combine their African religions with Catholicism in order to appear as though they were abiding by the rules of the Portuguese. Baianas de Acarajé still wear white to symbolize one of the deities of Candomblé known as Oxala. 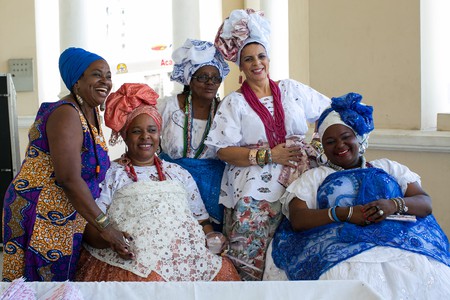 Besides the historical and religious background of the traditional dress, the Baianas are an important part of the food culture. The women can be found in all corners of Bahia selling acarajé, which is a mix of black eyed peas, shrimp and spices formed into balls and fried in palm oil. They create a similar treat called abará, which is essentially the same as the acarajé except the mixture is wrapped into a banana leaf and steamed instead of fried. The women also sell cocadas, a sweet mixture of shredded coconut, eggs and sometimes sugar and condensed milk. Whatever treat you try with the Baianas de Acarajé, be sure to admire their tradition and their talent, as they are the heart of the Bahian culture. 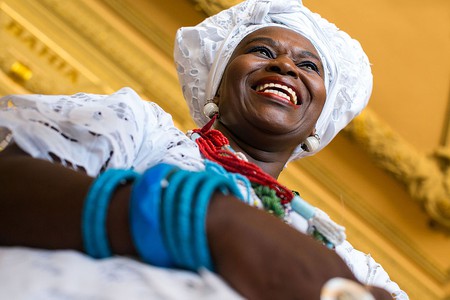