A Splash of Color: The Work of Romero Britto 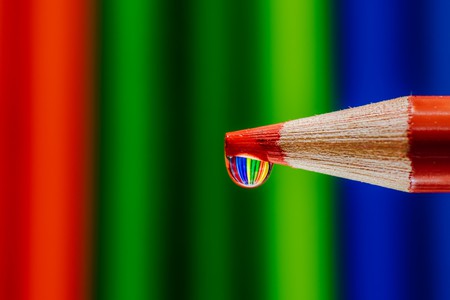 Romero Britto may not be a household name, yet his artwork and graphic designs are instantly recognizable from a number of high profile commissions. With influences ranging from Picasso to mid-Century Pop-Art, Romero Britto has become an important modern day pop culture icon. 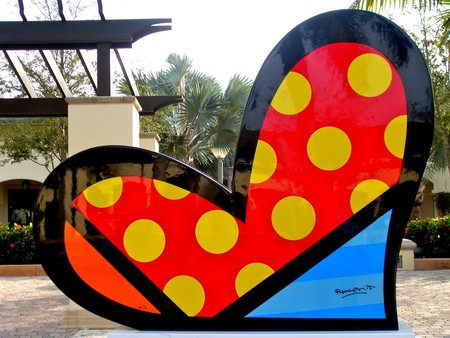 Born in Recife, Brazil in 1963, Romero Britto began life impoverished. The eighth of nine children, Britto was raised primarily by his mother. To encourage his talent, there were always art books in the house, and Britto was able to spend all his free time copying the artwork. He attributes much of his style and views on art to his early upbringing; growing up poor in Brazil exposed him to the darker side of humankind as a small child. As a result, Britto used his art to bring light and color into his life, and today feels that everybody, regardless of wealth should have the opportunity to enjoy and live with art. Despite his early talent in art, receiving honors at his first public exhibition held by the Organisation of American States when he was just 14, Britto initially pursued a career in law. He soon realized, however, that this career path was not conducive to his artistic and colorful nature, and after two short years, he returned to art.

In 1983 Britto travelled to Europe where he was inspired by the vibrant art of Picasso and Matisse, which he combined with pop art to create his own unique and iconic style. He immediately found success in one man shows held in Germany and England, but the lure of the States and American Pop Art was too much for the young artist to resist. In 1988 the young artist moved to Miami, attracted to the diverse cultural landscape and intense tropical light of the area, not too dissimilar to his native Brazil. It was here that his intense, warm, and bright style truly found a home; within the year Britto was selected to work alongside Andy Warhol and Keith Haring for Absolut Vodka’s ‘Absolut Art’ campaign. Since then his modern Pop sensibilities have lent themselves to numerous other advertising campaigns such as Evian, FIFA and Disney to name a few. 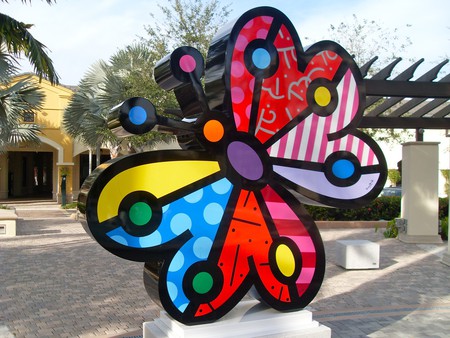 Romero Britto’s style has been described as ‘exuding warmth’ and evoking a spirit of hope, which indeed that is his primary aim. Bringing together bright colors and playful themes, his work has a childlike quality. He combines this with inspiration from Cubism as well as Pop Art, thus creating bold and vivid images that are reminiscent of Picasso, and yet completely modern at the same time. Their innocent appearance gives the viewer an open-minded and optimistic view of life, with inspiration gathered by Britto from the world around him.

This exciting and friendly style is popular the world over with both young and old audiences, and is currently on five continents in over 100 galleries. Additionally, his work is easily applicable to a wide range of products, from stationery to luggage to collectibles, which considerably widens his audience, creating an expansive fan base.

As well as exhibiting in galleries globally, Romero Britto’s work has also been included in a number of grand scale public art installations, including for the O2 Dome in Berlin, Hyde Park in London, John F. Kennedy Airport, New York, and Cirque du Soleil at Super Bowl XLI. His bold graphics and vibrant colors work particularly well with projects on a grand-scale. Some of his most recognizable work is that which he did for FIFA, for whom he created one of the official posters for the 2010 World Cup held in South Africa. Additionally, Britto has been selected to serve as an ambassador to the 2014 FIFA World Cup to be held in his native country, Brazil. 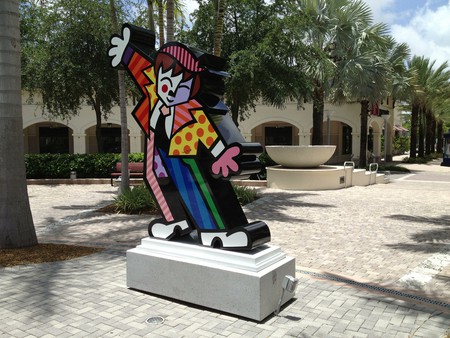 Another legacy from Britto’s first engagement with art as an impoverished child is his unwavering belief that art and artists ought to be instruments of positive change. As a result, he spends a staggering amount of his time supporting and working for over 250 charitable organisations. This involves his being on the board of a number of these organisations including St. Jude’s Children’s Research Hospital and Best Buddies International. Due to so much of his time being dedicated to helping others, in 2007 the Britto Foundation was established, effectively to enable him to better manage his time. Ever appreciative of the many mentors who helped him over the years, Britto endeavors to give those who are less fortunate a helping hand, supporting individuals and organizations who work to create, encourage, promote and preserve education and humanitarian based initiatives around the world, specifically to help children.

Always giving back, Romero Britto is an artist who is not solely defined by his art, but also by the way in which he uses it to help others, whether that means being involved in charitable organisations or creating art that brings joy to many people. Whether working on public art installations, commissions for well-known brands or fine art originals and prints, Britto’s work conveys an innocent quality that reflects life’s joyful moments. His use of bright colors and abstract forms appeal to a range of artistic sensibilities, young and old, amateur and professional, fulfilling Britto’s belief that art should, indeed, be accessible to all.