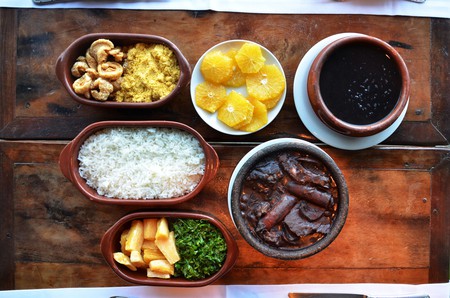 Brazil has many region-specific dishes, yet the the one that best translates into a nationwide dish is the beloved feijoada. The name stems from the word feijão (bean), the key ingredient of feijoada – which is essentially a bean stew mixed with beef and pork. Its Portuguese origins has made the dish popular across the country, but it is also served in places as far away as Angola, Mozambique and Cape Verde, with recipe variations in each country.

It is widely believed that the beginnings of feijoada stem from slavery in Brazil, where slaves put together the scraps of leftover beans and meat from their owners to create a kind of stew. However, academics have recently challenged this theory, claiming the origin of feijoada comes from the European settlers. Beans became one of their main foods thanks to its low-maintenance and lost-cost production. They added in cuts of meat and started to create a stew that could be cooked in large quantities and didn’t demand much effort to make. Regardless of the origins, nowadays feijoada is a truly Brazilian dish that is enjoyed and celebrated all across the country.

Typically, the Brazilian feijoada is cooked using black beans, although this may vary from one state to another. In Rio de Janeiro and Minas Gerais, feijoada is almost always cooked with black beans, while in Bahia, red or brown beans are preferred. The beans are stewed over a low heat for a long time and are cooked with salted pork, chunks of beef, smoked sausage and strips of jerked beef. The most traditional feijoada contains pork trimmings such as pig’s ears, trotters, and tails, yet most restaurants in the major cities serve it without these extras to cater for modern preferences. 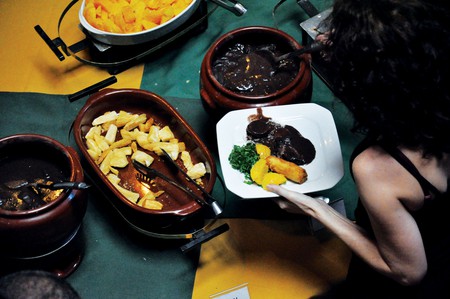 In Bahia and Sergipe, it’s usual to add extra vegetables to the feijoada such as plantain, kale, potatoes, carrots, cabbage, and pumpkin. These are added at the end of cooking to allow the stew’s vapour to lightly cook them from underneath. In the rest of Brazil, feijoada is simply beans and meat with no additional vegetables. It’s served with white rice, shredded kale with bits of fried bacon, crispy pork crackling, and slices of oranges that are meant to aid the digestion of the heavy meal.

Food for the soul

Feijoada is typically eaten at the weekend with family or a group of friends over an extended lunch period. It’s considered a comfort food and is often called “food for the soul.” Given its size and heaviness, it’s a food to be eaten slowly and savored. In the major cities such as São Paulo and Rio de Janeiro, it is often eaten on Wednesdays at the work lunch break. In Rio, two of the most renowned places for feijoada are Casa da Feijoada in Ipanema and Bar Mineiro in Santa Teresa, both hailed for serving authentic, rich feijoada dishes. 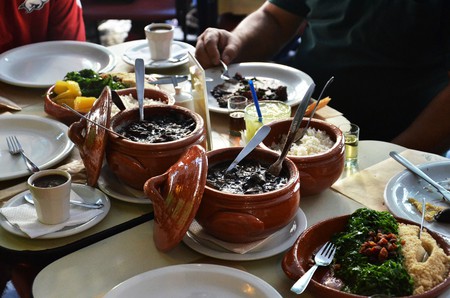