Welcome to Ñatitas: Bolivia’s Festival of the Skulls 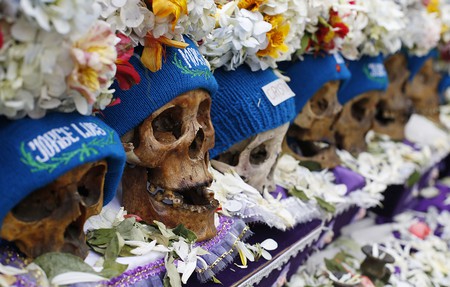 On November 8th each year, a different kind of festival takes place in La Paz. Rather than the usual procession of brightly colored dancers gallivanting through the city, hordes of pilgrims show up to the central cemetery carrying their most grisly possessions, the skulls of the departed.

Indigenous Aymara from all walks of life take part in the ritual known as Dia de las Ñatitas. They arrive early in the morning before the gates of the cemetery have opened, parading their skulls in anything from simple cardboard boxes to intricately carved wooden cases. Each skull is set on a bed of colorful flowers and lovingly adorned with accessories such as sunglasses, hats, and even jewelry. The better their appearance, the more blessings that people will be granted in return. 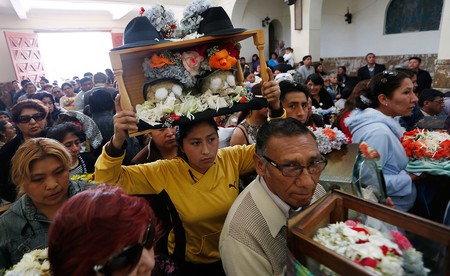 Since well before the arrival of the Spanish, the Aymara have believed that humans possess seven souls. Upon death and burial beneath the ground, six of these are thought to go to heaven while the seventh remains trapped in the skull. After spending some time to rest underground, the skulls are dug up and cared for in order to appease the spirits that remain. But this is not a purely altruistic ritual, as happy spirits are thought to grant a variety of blessings in return.

The skulls are usually stored in shrines within the family home until the day of the festival when they are dressed up and decorated before being brought to the lavish ceremony. If they have been adequately adorned, provided with ample cigarettes and alcohol and serenaded by a skillful band, the spirits are believed to feel content and will form a positive relationship with their owner. A happy spirit can do anything from preventing break-ins, providing blessings or simply helping the children do well at school. 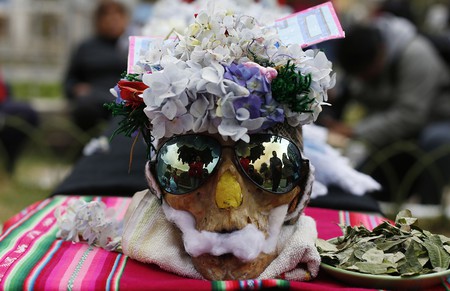 But the spirits don’t get along with everyone and are thought to evoke their wrath when displeased. Curses are placed on neglectful owners, which result in financial ruin, family feuds, serious health issues or even death. With such dire consequences in mind, believers do everything they can to keep their skulls as happy as can be.

Ideally, the skulls should belong to a relative or someone dear to the family. In reality, however, not everyone has access to a loved one’s remains, so many skulls are sourced from archaeological sites or student medical facilities. Disturbingly, grave robbers are known to dig up skulls at night and sell them for a respectable fee. 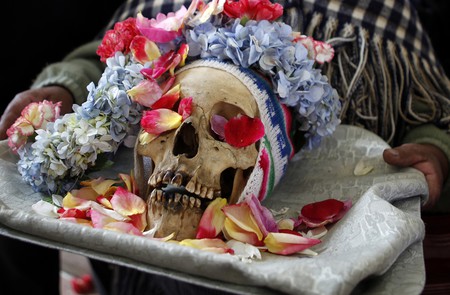 The Catholic church has always wanted to suppress the ritual as it contrasts sharply with their beliefs about death and the afterlife. During colonization, such practices were harshly punished, forcing the ceremony to go underground. It wasn’t until the 1970s that Dia de las Ñatitas began to resurface, as scores of farmers migrated to the cities in search of work, bringing their ancient traditions with them.

The Catholics are still against the festival but are powerless to stop it, even within their own churches. In 2003, pilgrims were banned from bringing skulls into a La Paz church, so they responded by throwing rocks and smashing several windows. Since then, the church has been forced to concede to the practice so as not to isolate a significant portion of their followers. 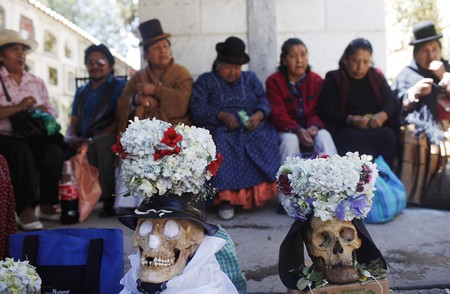 Nowadays, 10,000 people or more flood La Paz’ central cemetery with their skulls in tow, creating a colorful spectacle that culminates in a booze-fueled party. This newfound acceptance can partly be credited to the politics of Evo Morales, a president who has brought indigenous rights to the forefront of his priorities.

Even the police have gotten on board with this macabre tradition. In one of La Paz’ major police stations, two Ñatitas named Juanito and Juanita are celebrated detectives, credited with solving difficult cases and persuading hardened criminals to confess.