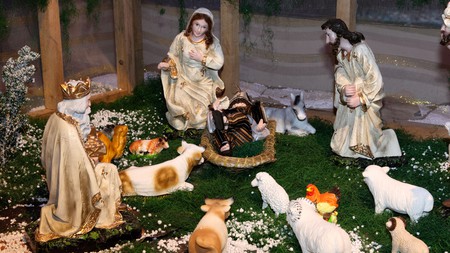 After carnaval, Christmas is Bolivia’s most celebrated holiday. But you won’t see much in the way of tinsel, fairy lights or presents under a Christmas tree here. With devoted Catholics making up approximately 77 percent of the population, the holiday is a deeply religious celebration largely reserved for Mass, processions and showing extra kindness to your employees.

In Bolivia, it’s uncommon to see homes sporting lights, tinsel or Christmas trees months before the big day. Instead, decorations are kept simple and, of course, will usually have religious meaning. The pesebres or nacimientos – small, often hand-carved nativity scenes – take center stage in most homes. Churches also go all out with huge, intricately decorated pesebres that include life-size cattle and biblical figures such as the Three Wise Men, Mary, Joseph and Jesus in his straw crib.

Christmas for Bolivians is not about how much money you spend or how beautifully you decorate your house; it’s about giving to those who have less than you. On the last working day before the Christmas holidays, many employers show their gratitude by giving their workers a canasta, a large basket filled with cooking essentials (such as flour, corn, eggs and salt) and sweet goodies (such as candies, fruit, honey or wine) to share with family on Christmas Eve.

As with many Latin American countries, most of the action happens on Christmas Eve in Bolivia. The festivities usually kick off with a religious procession through the streets, where men (sometimes for the entire day) will carry a huge, heavy altar bearing a statue of Jesus Christ. After going down every street of the town or city, the altar – with hundreds of people singing and dancing alongside it – will eventually be taken to the main church ready for Midnight Mass.

The celebrations continue with the hugely popular midnight Misa del Gallo (Mass of the Rooster), so named because devotees don’t return until the early hours of the morning. The candlelit service attracts thousands of people, with most churches in every town and city overflowing with visitors, many of whom listen from the steps outside. To mark the end of Mass, the roar of hundreds of firecrackers fills the streets.

Once everyone eventually returns from Mass (this will be no earlier than 1am), families sit down to their Christmas meal. On this holiday, Bolivians feast on picana, a traditional soup made from chicken, beef, red wine, potatoes, carrots and corn on the cob, along with a table filled with roast pork or beef, salad and fresh fruit.

A chilled out Christmas Day

With an action-packed Christmas Eve filled with processions, Midnight Mass and an all-night food fest, everyone’s feeling a little bit lazy – or delicate, should we say – on Christmas Day. The 25th is reserved for sipping hot chocolate, eating buñuelos (a doughnut-like pastry drizzled in syrup), some more church-going, meeting up with friends in the square and then heading back home to relax with family.