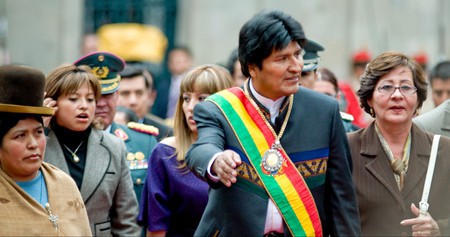 Bolivia’s president Evo Morales has recently opened a US$7 million museum entitled the ‘Museum of the Democratic and Cultural Revolution’, in reference to his own accomplishments. The political opposition is unimpressed, labeling it a waste of money and propaganda. Furthermore, much of the country has reacted angrily to the construction, arguing the money could be better spent on infrastructure, health or education. 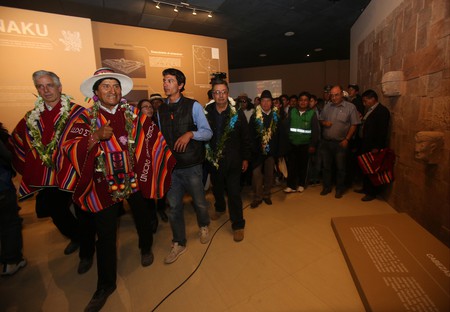 Mandatory Credit: Photo by MARTIN ALIPAZ/EPA/REX/Shutterstock (8254588c) Evo Morales and Alvaro Garcia Linera Evo Morales inauguarated Museum dedicated to his life in his hometown, Orinoca, Bolivia - 02 Feb 2017 Bolivian President Evo Morales (2-L), along with Vice President Alvaro Garcia Linera (L), participates in the inauguration of the 'Museum of the Democratic and Cultural Revolution - Orinoca', in Orinoca, Bolivia, 02 February 2017. Bolivia's President Evo Morales inaugurated the museum in Orinoca, his hometown, which is dedicated to his life, the history of the reforms he has promoted in his country, gifts that he has received through the years of his government and Pre-Hispanic indigenous cultural elements of the region.

The extraordinary museum is the biggest and most expensive in the country, featuring interactive displays and digital exhibits that convey the struggle of indigenous Bolivians against Spanish colonialism. One of its three main sections is entirely dedicated to the man himself, with extravagant busts and portraits, as well as personal items from his youth, proudly on display. More baffling still is the fact that it was constructed in the middle of nowhere, on the edge of Morales’ hometown. The farming village of Orinca has just a few hundred inhabitants, and is accessible only via a four hour drive from the nearest major city, along a bumpy unpaved road. Many argue that few people will come to visit the isolated museum and that the lavish modern structure is a perverse juxtaposition to the shanty huts of the impoverished village below. 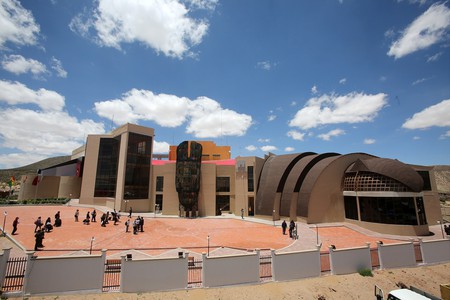 Mandatory Credit: Photo by MARTIN ALIPAZ/EPA/REX/Shutterstock (8254588g) General view of the 'Museum of the Democratic and Cultural Revolution

Evo Morales rose to power in 2006 after promising to nationalize natural gas reserves in the wake of a period of tense conflict known as the Bolivian Gas War. Shortly afterwards, the value of the country’s resources increased dramatically which enhanced his government coffers, affording him considerable spending power. Morales became extremely popular for distributing this newfound wealth among the country’s poorest inhabitants. He give stipends to struggling families and built hospitals and schools in poverty stricken rural areas. Leading a successful push for indigenous rights cemented his position as one of the great populist leaders of the time. 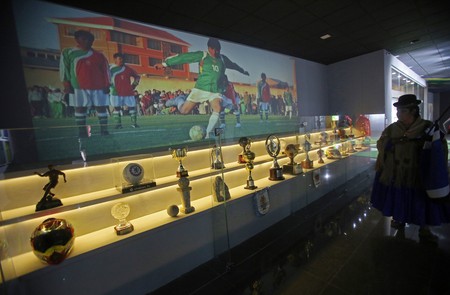 Photo by MARTIN ALIPAZ/EPA/REX/Shutterstock (8254588a) View of sport trophies and sports memorabilia that were given to Bolivian President Evo Morales from the moment he began to govern,

But recently things haven’t been going so smoothly for Morales. A sharp drop in commodity prices has made the economy sluggish while various corruption scandals have seen his popularity plummet. In 2016, he held a referendum for the people to decide if he could run again as president, to which they voted no. He is now looking for a way to circumvent the result, much to the ire of many. The construction of an excessively expensive museum, far away from civilization, is almost certain to reduce his support base in a country that is notorious for civil unrest.