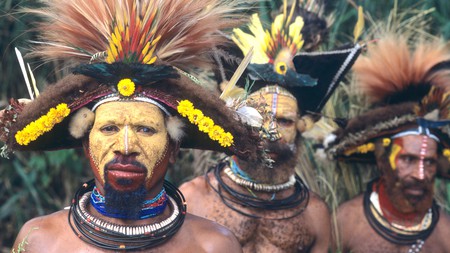 Aside from the natural splendour, it is the cultural diversity of Papua New Guinea that is the country’s biggest draw. The Melanesian nation is packed with an astounding mix of fascinating tribes and indigenous cultures. Culture Trip explores some of the most unique and famous tribes from around the country.

The wealth of indigenous culture in Papua New Guinea (PNG) truly sets it apart from other countries. Among the country’s population of 7m people, more than 850 languages are spoken and there are more than 600 distinct tribes. Because many tribes were cut off from each other – as well as the outside world – for 100s of years, cultures and traditions vary greatly from region to region. Many of these indigenous people now don their traditional costumes and perform their ritual dances at PNG’s famous cultural festivals. These include the Mt Hagen Show, founded in 1961 to unify the local tribes, and the Goroka Show, which draws 100s of international visitors each year.

But while the presence of these tribes at festivals – known as sing-sings – means we know more than ever about them, many of their customs and traditions remain shrouded in mystery. Read on to find out more about PNG’s fascinating and famous tribes. 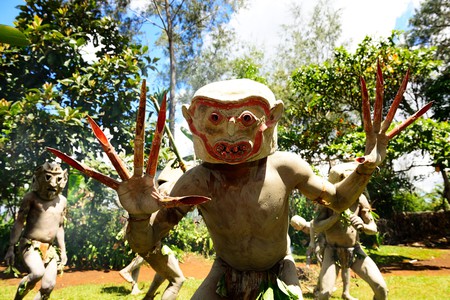 The Mudmen of Asaro, with their martial masks of clay, are truly a surreal sight | © imageBROKER / Alamy Stock Photo

The men from PNG’s eastern highlands are known for their eerie clay masks. The grey headpieces can weigh up to 10kg and are decorated with pigs’ teeth and shells. To complete the intentionally ghoulish costume, the men extend their fingers with bamboo, creating a Freddie-Krueger-style claw.

“The Asaro Mudmen are uniquely photogenic in their otherworldly costumes,” says David McGuinness, founder and director of Travel The Unknown. “They re-enact an Asaro legend in which a small group of Asaro tribesmen and women scare away a bigger tribe by dressing up in such costumes and doing the dance they now often recreate. The larger tribe, believed that they were the dead come back to life – a sure-fire way to scare away superstitious Highland tribesmen. If you visit an Asaro village they will be happy to reenact the whole dance – with fire, chanting and clicking of those eerie claws.” 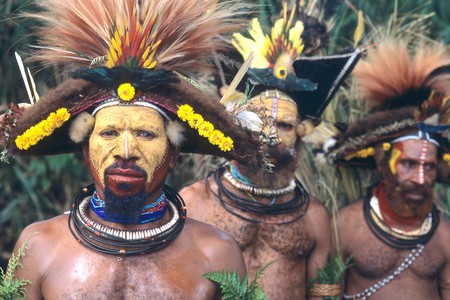 Hailing from Tari in PNG’s southern Highlands, the Huli Wigmen create spectacular headdresses from their own hair. It’s a coming-of-age tradition for boys to be sent into the forest for months at a time to grow their hair. They live in a hausman (men’s house) in the jungle with the tribe’s elders.

“The elders give them stories and they treat their hair with traditional medicine,” says Dilen Doiki, a filmmaker from Goroka in the Highlands. “Once it grows bigger they cut their hair and they make headdresses from it. Once they come out from the hausman they dress them up with their wigs and do a traditional dance.

“There is a big feast, and the community is told that those boys are now men – they are ready to have a family, a wife and a garden,” Doiki said.

The spectacular wigs are decorated with feathers and ochre, and they smear their faces in yellow clay. The Huli Wigmen are a regular feature at the annual Goroka Cultural show in September. 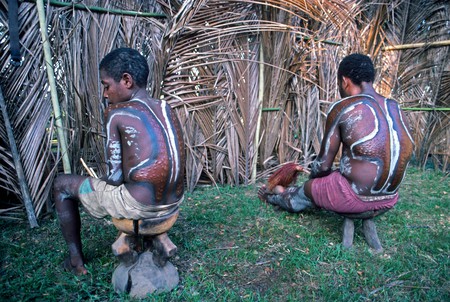 The Crocodile Men of the Sepik region are famous for their intricate body patterns. These are cut into the skin to resemble the hide of a crocodile – an animal revered by people in this province as it is believed to symbolise strength, power and manhood. Young men in the tribes of the Sepik region go through a brutal initiation ceremony to mark the skin on their backs and shoulders.

“When a young man comes of age he is ceremonially taken from his mother – who resists, screaming and wailing – and brought to a spirit house,” explains McGuinness. “At this holy, men-only abode, they have tiny cuts made in their skin, which are allowed to heal, then worried again, in a process that takes months and leaves the famous crocodile-patterned scarring all over their upper bodies.”

The men chew betel nut, which acts as a mild stimulant, to help ease the pain during the gruelling process. 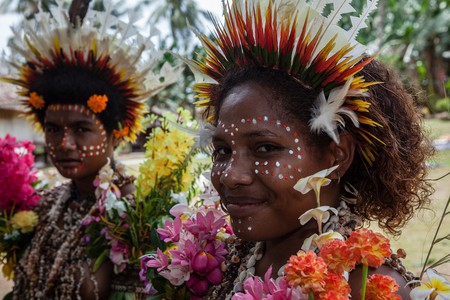 In the Oro Province, young women are given face tattoos when they come of age | © WaterFrame / Alamy Stock Photo

Oro province in the southern PNG is famed for its beautiful tapa cloth designs. Each clan owns the rights to their specific designs, and these intricate patterns are also emulated in the facial tattoos of women from the province.

“In the Papuan region of Oro Province, the Orokaiva speakers on the north coast make and wear tapa cloth – beaten and stained by the bark of the mulberry tree – which is a very distinctive element in their culture, as is their face tattooing,” says British filmmaker Steve Ramsden, who was born in PNG.

Young women are given the tattoos when they come of age, usually between the ages of 14 and 18, and the markings signify they are ready for marriage. The craft is passed down through generations. Female elders take the girl into their care for up to two months and use a thorn to pierce the skin, dyeing the cuts with a mix of charcoal and water. 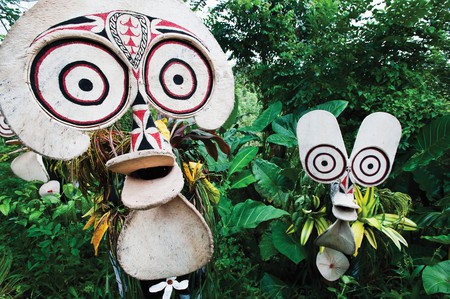 The fire dance performed by the Baining people is perhaps one of the most famous displays in PNG. The Baining people live in the mountain forests of East New Britain province, on the second-largest of PNG’s 600 islands, about an hour drive from the town of Kokopo. Their unique tradition sees young men paint their skin white and don elaborate masks with painted spiralling eyes and large lips. They wear the giant bamboo and bark masks while dancing among the flames of a roaring fire. The elaborate ritual is performed by the spirit men of the tribe and is performed to mark births and deaths. It is also said to be an initiation ceremony to welcome young men into adulthood. 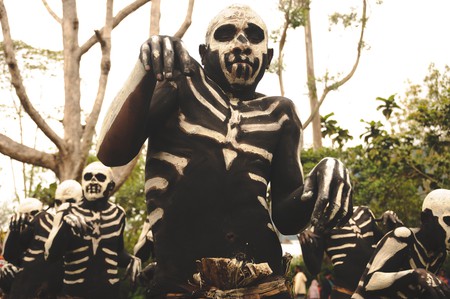 The isolated Chimbu, or Simbu, tribe live in PNG’s Highland region and are famous for their skeleton dance. Young men paint their bodies black with white bones to resemble the dead.

Not much is known about the Chimbu tribe, who first made contact with the western world in 1934, but it is clear that their dance is intended to intimidate their enemies. The Highland region is a hotspot for flare ups of tribal disputes and individual groups adopted unique tactics to scare away rival tribes.

“Little is really known about the Chimbu, who have tended to live in remote settlements rather than villages, though the dance can be seen in some villages where boys are painted to look like skeletons and move in a sort of death shuffle,” says McGuinness.

“Their languorous zombie-like motion is clearly meant to represent the dead – a tactic not dissimilar to the Asaro – and clearly effective in a region where respect and fear of the dead go hand-in-hand.” 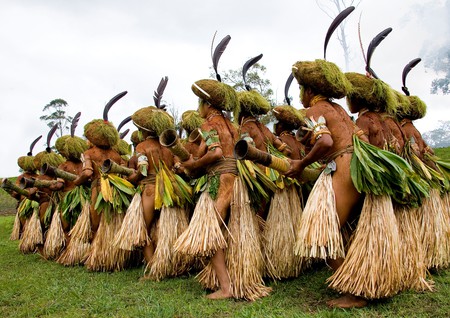 Adorned with giant headdresses made of moss, and their bodies smeared in different coloured soil and clay, the Suli Muli dancers are an impressive sight. The tribe gets its name from the song lyrics to their traditional dance. They shout “suli muli” to the beat of kundu drums as they rhythmically move through the performance. Enga Province is their home, and they are often seen performing at the Enga Cultural Show, held in August each year at Wabag. Like the Huli Wigmen, their ornate headdresses can be made from human hair. But moss, plant fibres, feathers and different coloured leaves are also used to give them body and as decoration. Their black face paint and bare chests are also a key part of their traditional dress.