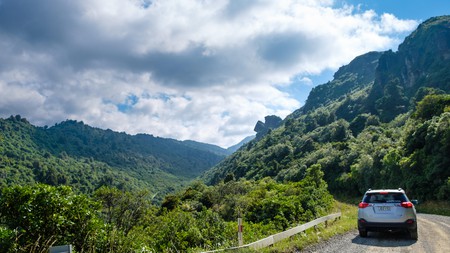 New Zealand’s North Island has so much to offer for those itching for adventure, with mountains, spectacular beaches, waterfalls and geothermal pools just a road trip away. Up north, discover sacred places, ancient trees and islands. In the central zone, visit caves and geothermal steaming pools, while further south, a volcano and some of the best surf spots in the country. Here’s a list of the best road trip adventures on New Zealand’s North Island.

Northland treasures in Cape Reinga and Bay of Islands 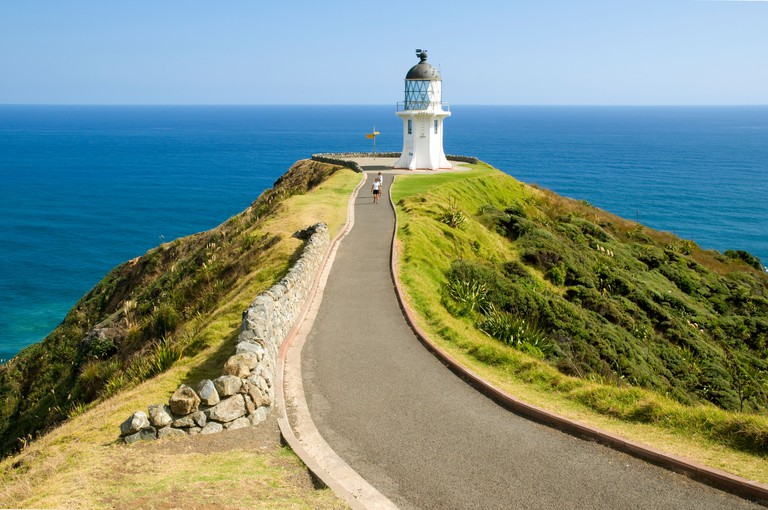 © Vincent Lowe / Alamy Stock Photo
Head 310 kilometres (193 miles) north from Auckland to Kaitai in Northland, then explore the sacred Cape Reinga northern point of New Zealand and Ninety Mile Beach. Enjoy bodyboarding down the steep dunes followed by a swim in the dazzling blue waters. Drive back down south 89 kilometres (55 miles) to Waipoua Forest near Omapere to see Tāne Mahuta, New Zealand’s largest known living Kauri tree. The route via Kohukohu includes a ferry crossing. Finally, head 120 kilometres (75 miles) west across the width of the top of New Zealand’s north island to the Waitangi Treaty Grounds and visit the place where New Zealand’s founding document was signed. Then head across the bridge to Pahia, the gateway to the Bay of Islands, an ocean playground of sandy beaches and spectacular caves and marine reserves worth exploring on a charter boat.

Adventure on the east coast in Bay of Plenty 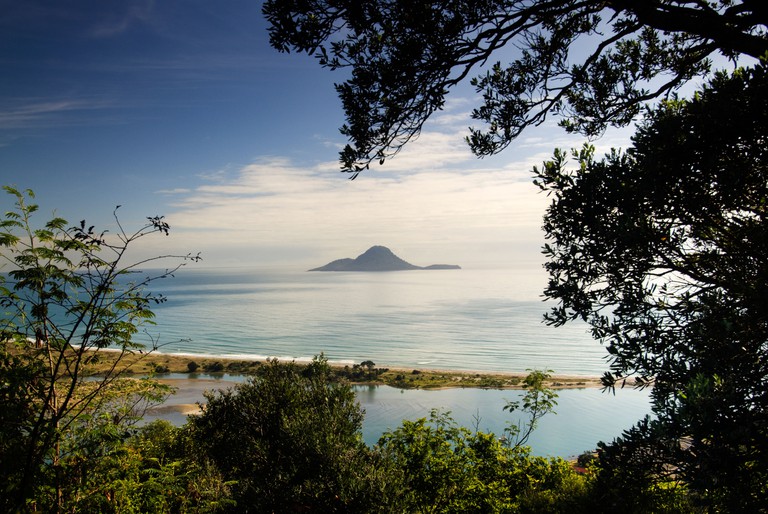 © PhotoImage / Alamy Stock Photo
Travel southeast out of Auckland to the Bay of Plenty on the east coast of New Zealand’s North Island. Drive 211 kilometres (131 miles) from Auckland to Tauranga, a booming city known for its beautiful beaches and climb Mount Maunganui for excellent views of the ocean. Carry on south for 89 kilometres (55 miles) through the kiwifruit-growing area of Te Puke until the town of Whakatane. Go on a tour to the predator-free Moutohorā (Whale Island) to see rare native birds and a seal colony. Then head back inland and drive 86 kilometres (53 miles) to Rotorua for an exhilarating mountain-bike ride through the region’s famous redwoods in Whakarewarewa Forest.

Caves and geothermal wonders in Waikato 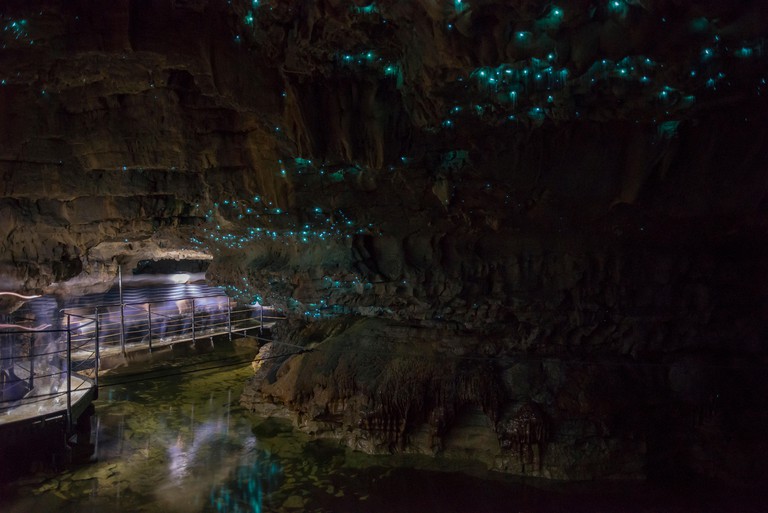 © robertharding / Alamy Stock Photo
Book Now
Head south out of Auckland for 195 kilometres (121 miles) and stop at Waitomo Caves in the Waikato region. Home to thousands of glow worms, Waitomo Caves are an adventure seeker’s dream, with options to walk, go river rafting or abseiling through the magnificent network of caves and underground rivers. Head 150 kilometres (93 miles) south-east to Lake Taupo, New Zealand’s largest inland lake. Go kayaking or sailing on this lake and stop or walk to the nearby Huka Falls to see 220,000 litres rumble over the 11-metre high waterfall. Finally, head 50 kilometres (31 miles) northeast to the Wai-O-Tapu thermal track, and take in the dramatic geothermal bubbling mud pools and natural springs that shoot water up to heights of 20 metres (66 feet) more than a dozen times a day. 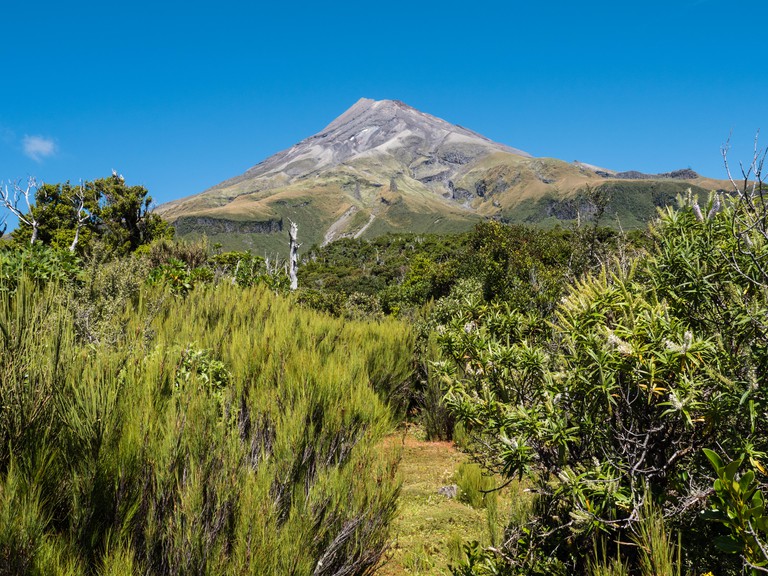 © Stephen Sykes / Alamy Stock Photo
Head southwest out of Auckland 159 kilometres (99 miles) until the small town of Raglan, known for some of the best surf in New Zealand. The black-sand beaches in Manu Bay have a long and consistent left-hand break. There is also a surf school for beginners who want to get on a longboard and catch some foamies. Continue south 250 kilometres (155 miles) passing Waitomo Caves until the city of New Plymouth, the gateway to Mount Taranaki. This dormant volcano was formed 120,000 years ago. Hike the slopes of this perfectly formed volcano on one of the many trails in Egmont National Park. Drive along the coastal State Highway 45, also known as Surf Highway 45 for all the epic surf spots along the way from Oakura down to Hawera. 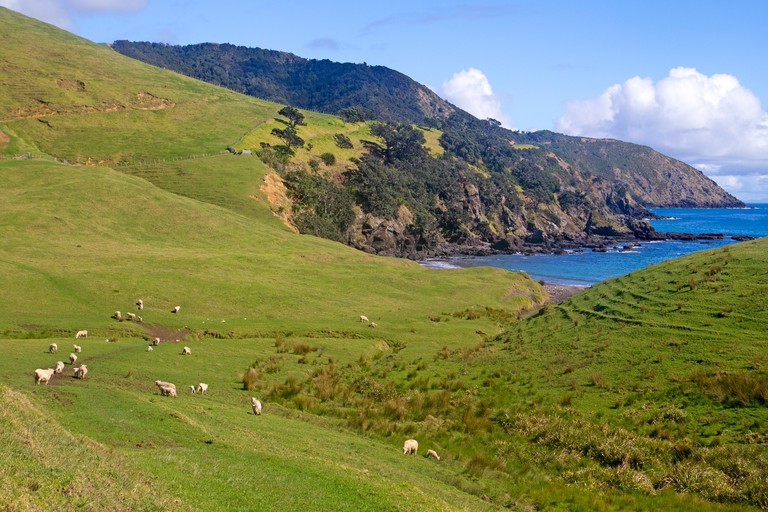 © Andrew Bain / Alamy Stock Photo
Drive 122 kilometres (76 miles) east from Auckland to Thames, a small town on the coast of the Coromandel Peninsula, a region that is known for its spectacular beaches and dramatic coastline. Hop on a bike and cycle along the Hauraki Rail Trail or go hiking in the Kauaeranga Valley. Head 123 kilometres (76 miles) north to Port Charles and walk along the Coromandel Coastal Walkway that runs 20 kilometres from Stony Bay to Fletcher Bay. Finally, drive 101 kilometres southeast to the golden-sand beaches of Hahei and explore the giant rock archway at Cathedral Cove or take a dip in the Pacific Ocean and enjoy natural springs at Hot Water Beach.
Give us feedback