How Māori Culture Is Reflected in Wellington’s Urban Design 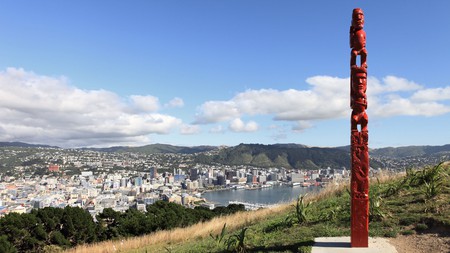 The New Zealand capital has a rich and diverse history, linked with stories of exploration and settlement of the Māori, followed by Europeans. Culture Trip explores how Māori culture is reflected in this bustling city.

Despite the Māori arriving before the Europeans, at first glance, Wellington appears to still have a strong British colonial veneer – dominated as it is by Victorian-era buildings, a cable car and with many streets and suburbs named after colonial-era ships and old English towns.

Tira Poutama, the City Arts and Events and Urban Design teams, say narratives of Māori cultural heritage do exist in hidden layers of the city’s rich history. This is visible, for instance, in the Māori-inspired designs on manhole covers and lampposts.

Interventions in the natural landscape, urban design, public art and names of streets or landmarks are just some of the ways these hidden layers of New Zealand’s first settlers are being integrated into the city’s public facade. Visit the sites listed below to experience how Māori culture is reflected in urban design interventions in public spaces.

A tribute to Kupe, the first Polynesian to discover New Zealand

Before the voyages of European navigators such as James Cook and Abel Tasman, the Polynesian explorer Kupe first discovered New Zealand. According to a story by ethnographer Elsdon Best, published by the Wellington City Library, Chief Kupe was on a voyage with his wife, Hine Te Apārangi, when they spotted clouds in the sky. The sight came as a relief for the voyagers, as it represented the presence of land, where they could rest and find refreshments. Kupe then gave New Zealand its Māori name, Aotearoa (land of the long white cloud). 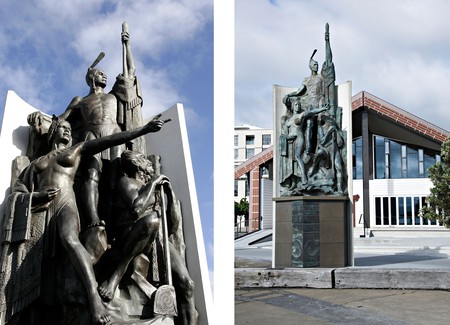 The story of Kupe’s discovery of New Zealand is highlighted by a large sculpture of Kupe, his wife and priest (tohunga) Pekahourangi on the waterfront close to the Te Papa National Museum in Te Aro. This sculpture, by William Trethewey, was created in 1940 to commemorate the 100th anniversary of the signing of the Treaty of Waitangi. The original work, made of plaster, was situated at the Wellington Railway Station until it was recast in bronze in 2000 and moved to the waterfront.

A symbol of voyage highlighted in the ‘waka’

Kupe, and the Māori settlers after him, travelled to New Zealand on a hand-carved canoe, known as a waka. Today, the waka is an important symbol in Māori culture, with ornate carvings telling stories of different Māori tribes’ origins. These ocean vessels were made out of indigenous hardwood trees such as kauri, kahikatea and tōtara.

In Wellington, landing sites of the canoes during pre-European times are also important links to Māori heritage. In front of the National Parliament and Beehive buildings , in Thorndon, is Wai-titi Landing, a park with twin upright canoes (also known as Pou Whenua – tribal boundary markers) made out of white cement and marble by the New Zealand artist Rā Vincent. 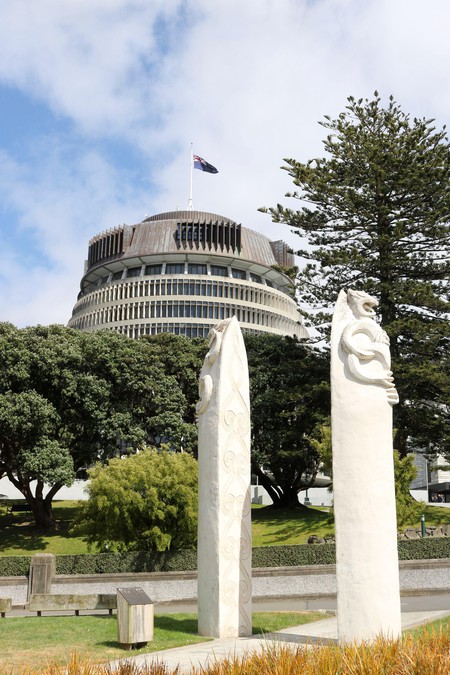 Wellington’s City Arts and Events and Urban Design teams say this kind of public space project is an opportunity to provide a voice and educate the public on “mana whenua”, the Māori cultural value of the power of belonging to the land, in the context of a specific place. “We can look for these projects to bring forth visual references to streams and shorelines of the past. This can be a powerful way to remind people of the pre-colonial landscape which is of continued significance for Māori,” says the group.

Much of Wellington’s harbour and quays are built on reclaimed land that surfaced after earthquakes. According to Wellington City Council, the land around Waitangi Stream, now Waitangi Park, was lifted 1.5m (5ft) after an earthquake in 1855. The 6ha (15-acre) urban park is an integral part of the harbourside public space, hosting concerts, and it’s a good spot for skateboarders to crash around on, as well as a playground for families. 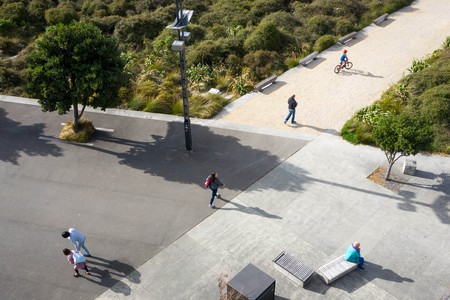 This public space intervention not only supports the sustainability of the existing stream but also incorporates Māori principles into its design. The Waharoa (traditional Māori entranceway) reminds visitors to Wellington of the Māori tribes’ links to the land, as the Waitangi stream once fed a bigger wetland that was used to gather food, get fresh water and launch canoes.

Another way the city council is representing Māori culture in the capital is through the introduction of native plants into city parks and public spaces. Otari-Wilton’s Bush is a botanical garden established to conserve native New Zealand plants. The City Arts and Events and Urban Design team says efforts like these “support our natural landscape by planting natives that help our native birds and insects flourish, including plant species that can be harvested, such as flax, enabling interaction and connection to our waterways”.

The resilient flax plant, which can survive in dry and wet conditions, has long, sword-shaped leaves that can grow up to 2m (6.5ft) tall. According to the Encyclopedia of New Zealand, flax was traditionally used by the Māori in weaving to make baskets and mats. 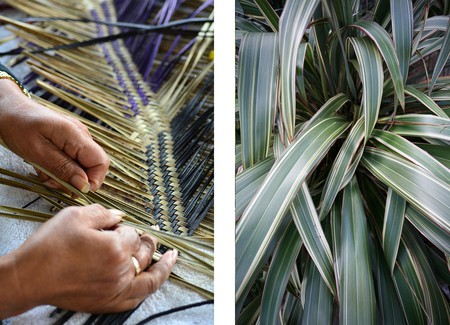 Visit the Mount Victoria lookout point for 360-degree views of Wellington, and you’ll notice the flax plants surrounding the viewing platform. The long green leaves and flowering spikes, which can reach up to 4m-5m (13ft-16ft) tall, frame the lower edge of the urban landscape of Wellington.

To successfully achieve integration of Māori culture into design principles for the city requires more work and consultation with local Māori groups. The city council admits that more can be done to “provide a foundation of Māori design principles that guide the design process and produce better-integrated outcomes. We are looking for ways that we can better interpret our Māori narratives both past and present through our current design projects,” says Tira Poutama.