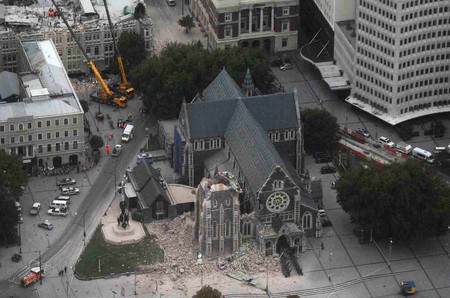 In its prime, the Christchurch Cathedral was the focal point of Cathedral Square – an area historically recognised as the heart of the New Zealand city of Christchurch. The 2011 earthquake devastated the building, and its fate was soon cast into doubt. After several years of debates and court disputes, it was decided that the cathedral would be restored. Here’s a brief look at this landmark throughout the centuries.

A cathedral is built

The Christchurch Cathedral was designed by the prolific English architect Sir George Gilbert Scott, who was one of the most successful Gothic Revival exponents of the Victorian Era. Benjamin Mountfort also collaborated in the project, redesigning the church’s spire and monitoring the construction process once it began. The cathedral’s cornerstone was laid in December 1864, while its foundations were completed in 1865.

Erecting a cathedral in the square was a slow process. In fact, it took 10 years for Christchurch’s first appointed Anglican bishop, Henry John Chitty Harper, to get the construction under way. Money ran out after laying the foundations, and arguments were made that the funds would be better spent elsewhere. Still, Harper persevered, managing to get the build back on track by promising to pay for a part of it out of his own pocket. Construction resumed in 1873, and was officially concluded after the addition of the chancel and transepts in 1904. The final cost at the time totalled to £65,572. 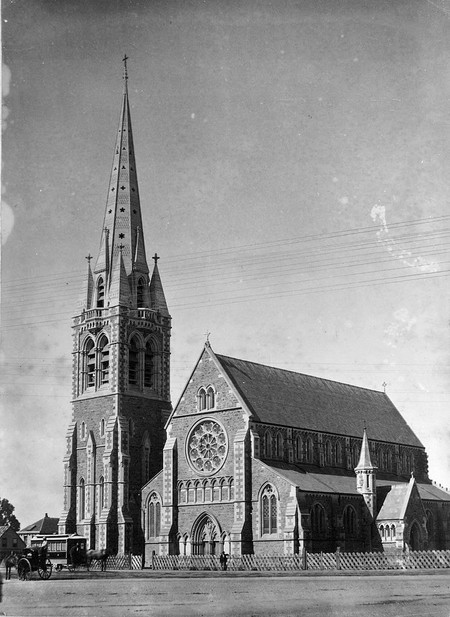 The cathedral at its prime

Initially, Sir George Gilbert Scott wanted the cathedral to be made out of wood, but he soon changed his mind after seeing the abundant supply of stone available in the Canterbury region. While the facade was made of stone, the roof was composed of native matai (black pine) and totara timber from the Banks Peninsula.

The cathedral’s West Porch was another distinctive feature. It was viewed as a benchmark to the city because it was positioned 6.2 metres (20.3 feet) above sea level. 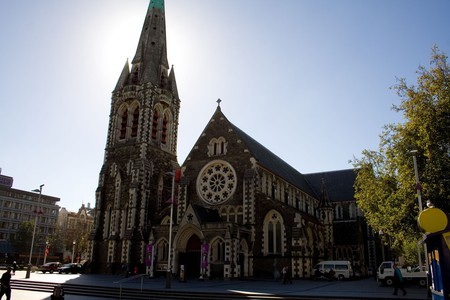 The interiors were given many embellishments. Notable examples included a rose window which represented the different orders of the angels, Venetian mosaics representing the words of Mercy, a statue of Bishop Harper, and a high altar flanked by ornate wooden carvings.

Several refurbishments were made to the cathedral throughout its history. A series of earthquakes in 1881, 1888 and 1901 left the spire damaged; subsequently, the tower was replaced with copper-sheathed hardwood. Further interior restorations were conducted in 1978, and the chancel was restructured in 1988. A Visitor’s Centre alongside the cathedral was officially inaugurated by the Queen in 1995, and a columbarium (i.e. a wall made for storing people’s ashes) was built in 2000. 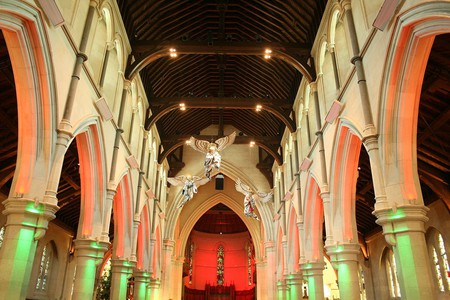 Christchurch Cathedral after the 2011 earthquake

Prior to 2011, the Cathedral was a strong component of the wider Christchurch community. New Zealand’s only professional boys’ choir – which is one of only two in the Southern Hemisphere – was established by the cathedral. The landmark also hosted a number of local events, like musical performances and an annual flower festival. Not only that, its bells also rang to mark both religious and non-religious celebrations alike, including the arrival of the godwits in spring.

During the September and December 2010 earthquakes the cathedral only suffered some minor damage. In the February 2011 quake, however, the structure was severely devastated. Luckily there were no fatalities – only one injured person who had to rescued from the bell tower. In the aftermath, the Anglican Church decided it would be best to partially demolish the cathedral. A deconsecration ceremony took place in November 2011 under the watchful eye of 200 invited members of the church community.

Demolition of the Christchurch Cathedral began in March 2012, only to be stalled by the growing opposition against it. Disapproval over the deconstruction reached as far as the UNESCO World Heritage Centre, which argued that the building’s symbolic value should be given extra attention. While the cathedral is not a World Heritage site, it was granted Heritage New Zealand’s Category 1 Historic Place status in 1985.

In November 2012, the Great Christchurch Buildings Trust submitted an application to the High Court asking for a judicial review on the demolition. The verdict given was that the church should build another cathedral on the site, but it did not specify what form it should take. This led to the construction of the Cardboard Cathedral, designed by Japanese architect Shigeru Ban, which was opened in October 2013. The structure was intended to be a temporary solution as the court proceedings continued to unfurl. 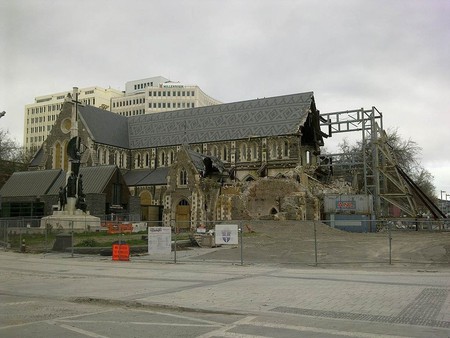 In 2013, the Anglicans offered three different options to the Christchurch community: restore the old cathedral as it was, build a modern replacement on the original location, or refurbish the old cathedral with modern materials. A modern design was deemed to be more time and cost efficient, and received wide-ranging support from the public. Unfortunately, the Anglican church could not progress on this idea while the court disputes were taking place.

It wasn’t until September 2017 that a final decision on the fate of the Christchurch Cathedral was made. After years of court proceedings, debates and discussions, the Anglican Synod voted to restore the damaged landmark. The rebuild will be funded using a combination of insurance, donations, as well as financial grants from the Great Christchurch Buildings Trust, the New Zealand Government, and Christchurch City Council.