How to Take Part in a Traditional Fijian Kava Ceremony 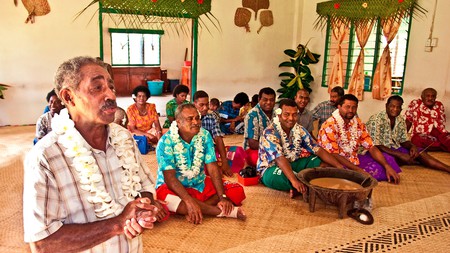 Kava, or yaqona (pronounced yang-GO-na) as it’s called locally, is Fiji’s national beverage and a sacred and enjoyable part of daily life on the archipelago. Most visitors will be offered a bowl of the bitter, soporific drink at some point during their stay, either spontaneously or as part of a village tour or cultural event. Discover the dos and don’ts surrounding this fascinating ritual.

Kava comes from the roots of the shrubby, unassuming Piper methysticum plant, and is consumed by Polynesians across the Pacific, though it’s believed to originate in the archipelago of Vanuatu. Preparation varies from place to place. In Fiji, the plants are pulled from the ground and the roots left to dry in the sun for a few days before they are ground into a paste, mixed with water and strained to create a greyish-brown liquid.

“Back in the old days,” says Jay Whyte, who founded the Sigatoka River Safari on Viti Levu, “they would get the virgin women to chew the root and spit the extract out into the bowl – so that it would be pure.”

Kava is used to help people relax, build connections and decide on important issues. “For all major events of cultural significance, there’ll always be a kava ceremony,” says Whyte. To learn about what to do when offered a bowl of the stuff, explore our how-to guide below.

“When the first Europeans came to Fiji, they brought Christianity along with them, and so a lot of what is allowed and not allowed in Fiji is very much linked to those times,” says Whyte. That means conservative, modest clothing is important in village settings – long skirts, sulus (sarongs), dresses or trousers that cover the knees and a top that covers the shoulders. It’s customary to remove your hat when coming into a village as a sign of respect to the chief, and take your shoes off when entering a home or meeting house.

Whyte’s tours always involve a village visit, and the visit always begins with a kava ceremony. Participating in such a ceremony signifies great respect for the Chief, their people and their vanua (land). The group leaders make sure the visitors don’t come empty-handed and bring a bunch of dried kava roots as gifts to the community. For those attending a ceremony on their own, kava can be purchased at most local markets.

Visitors then sit cross-legged on the ground opposite the tanoa (a large carved wooden bowl filled with the kava drink) with the village people facing them. “And then we go through the protocol of presenting that offering of kava, which is called the sevusevu, to them, and explaining who we are and where we’re from,” says Whyte. It’s traditional to bemoan the humbleness of the offering in this speech.

Then it’s the villagers’ turn. The chief, or a high-ranking representative, will receive the kava on behalf of their clan and welcome the guests to the village. Oratory is highly valued in Fijian culture, so this process may take some time!

The kava will be served by a tu yaqona (cup-bearer) to visitors and villagers one by one, in a bowl called a bilo which is usually made from half of a coconut shell. The protocol is to clap once, receive the kava and say “Bula” (pronounced ‘mbula’), which means life. The rest of the group then repeats the greeting back, and then it’s time to drink up – ideally, the whole bowl in one gulp. After that, the recipient claps three more times. The tu yaqona will then say “Maca” (pronounced ma-tha), which means finished, and everyone will clap together. The bowl is then filled for the next person.

Kava has a mild narcotic and sedative effect; it can make people’s legs go wobbly and their lips go numb. “Most people have a really good sleep afterwards and feel really relaxed,” says Whyte. “Kava is a known antidepressant, too – they say that’s why Fijians are always so happy!”

During the ceremony, it’s expected that participants will maintain a dignified silence. It’s a sign of respect to sit lower than the chiefs and highest-ranking guests, which is why when people move around during the ceremony they are usually stooped double. It might seem like there are a lot of protocol to follow, but Fijians are usually very understanding and encouraging of their guests, and most will cheerfully guide them towards the right practices.

Kava ceremonies can go on for multiple hours and even days, and while many locals can stomach impressive amounts, it’s not recommended that visitors try to follow their lead. The drink is unlikely to cause a hangover, says Whyte, but “when you drink too much kava, you can throw up because you reach a point where your stomach just can’t take any more.”

Kava is not just about the drink itself, but the connections and conversations that are made in conjunction with it. “Once the kava ceremony is done, you’re officially part of the village; you’re officially in, so to speak,” says Whyte. “That’s what they say about kava: you come together as strangers and you leave as friends.” In a spiritual sense, the completion of the ceremony marks the moment when the two groups are united as one, with a shared purpose.

For those who want to share the experience with friends back home, powdered and packaged kava can be purchased at shops around the country.