Japanese bodysuit tattoo by Kian Forreal | Courtesy of Authentink
A number of phenomena have gripped Sydney’s inner-city trendies over the last decade or so. Beards and undercuts when it comes to hair. Kale and craft beer in the food and drink department. Plaid and horn-rimmed glasses in the field of fashion. But the one trend that’s been most permanent, in every sense of the word? Tattoos, which have become a near-compulsory addition to the skin of anyone who hopes to live in Sydney’s coolest neighbourhoods. So where should you get inked up before you move to Marrickville or Surry Hills? Try these eight excellent tattoo parlours around town.

If you’re after a traditional Japanese tattoo, look no further than this converted Surry Hills warehouse, with a stable of artists that specialise in Japanese bodysuits – particularly the dapper Horisumi-Kian Forreal, an ‘irezumi’ master known for tattooing in his signature P Johnson tailored suits. Authentink’s other six tattooists handle more than just the Japanese style – they also create stunning custom geometric, dot-work, ethnographic, monochromatic realist and floral designs. 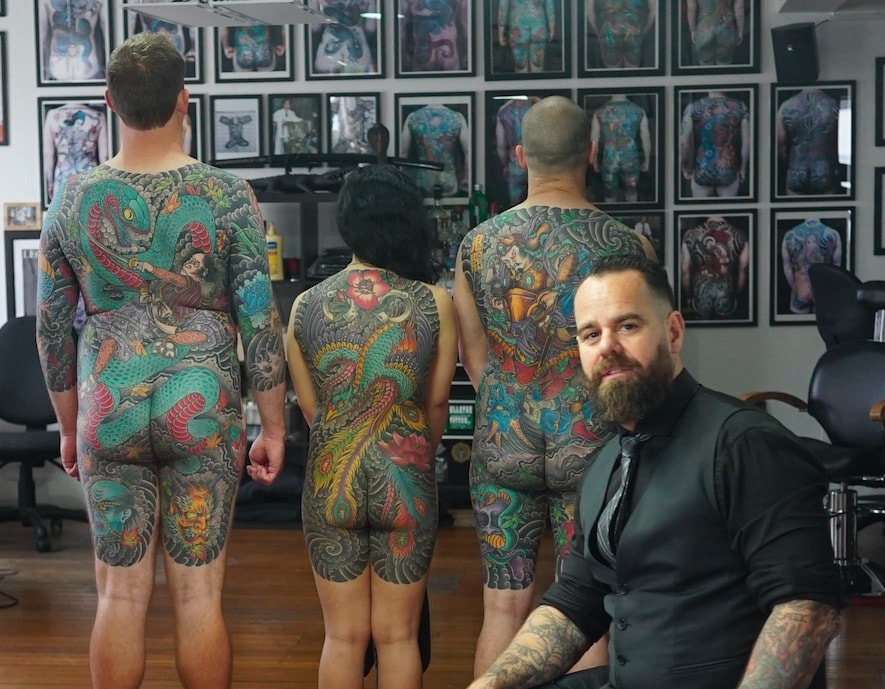 This bright, retro, inner-city studio has earned a huge following for serving up envelope-pushing tats to its fashionable clientele over the five years it’s been in business. Owned by husband and wife partnership Heath Nock and Lauren Winzer (Lauren’s even inked Miley Cyrus, FYI), Hunter and Fox boasts a team of 12 ink-masters as well as a laser removal service if you want to tidy up some of your old work.

Definitely qualify for this decision #hunterandfoxtattoo 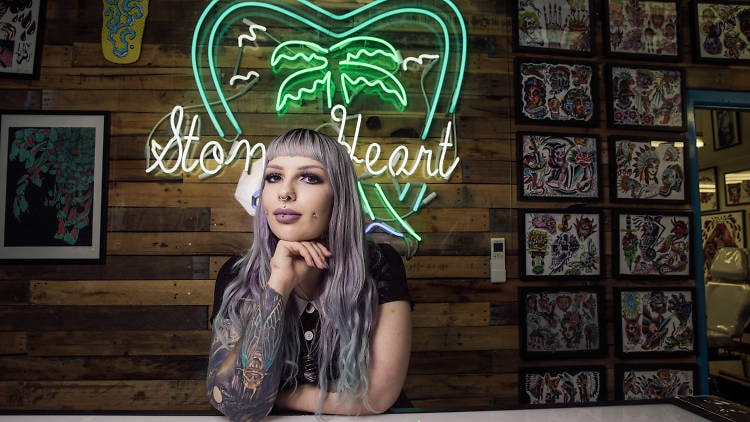 Don’t let the name fool you, Little Tokyo does plenty more than just traditional Japanese ink, with a squad of 11 experienced tattooists covering everything from Americana to detailed realism. The hidden Surry Hills studio– which boasts Ruby Rose and Justin Bieber as past clients – is what Little Tokyo describes as “a treasure-trove of tattoo relics, tattoo memorabilia and just plain old cool shit”, including historic Japanese hand-poke needles.

Another studio renowned for its large-scale Japanese pieces, Lighthouse is proud of the fact that nearly 100 per cent of their customers leave their industrial warehouse in Botany with a carefully designed custom piece. Lighthouse has 11 resident tattooists who each specialise in a chosen area, rather than a handful of all-rounders – book in advance to arrange the perfect tattooist to customise your piece. 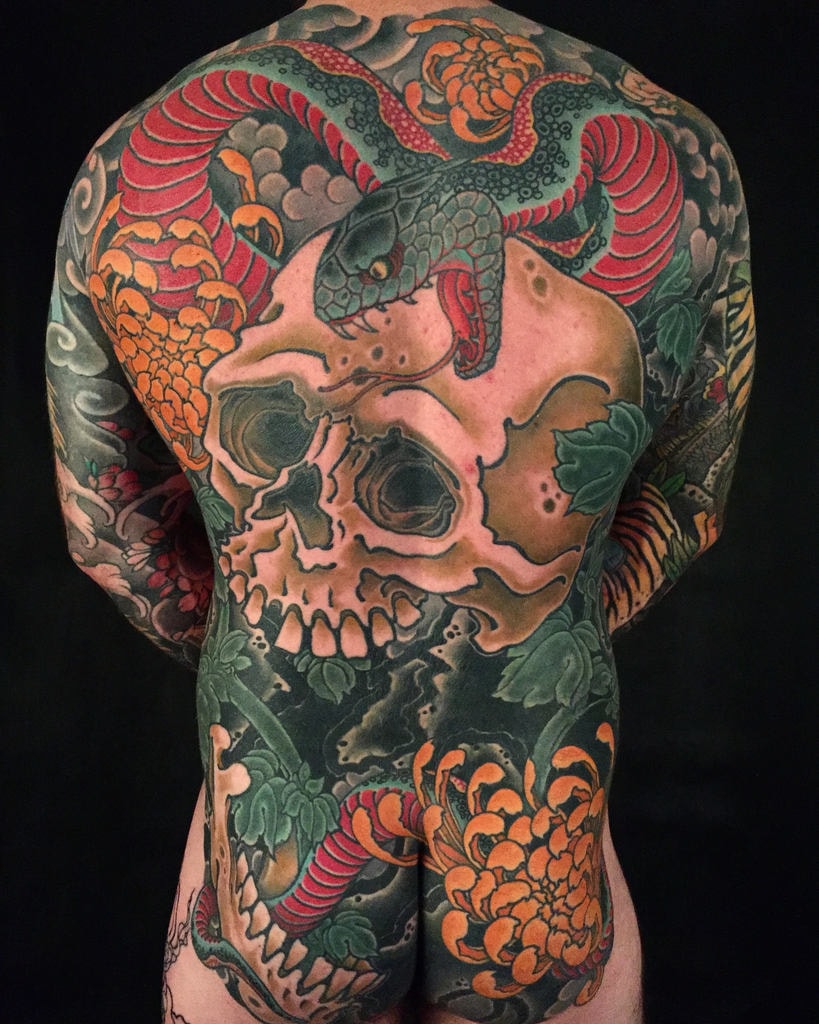 Back tattoo by Alex Rusty | © Alex Rusty/Courtesy of Lighthouse Tattoo

The owner of LDF, Leslie Rice, has art in his veins. His father Les Bowen began tattooing in Brisbane as a teenager in the 1950s and passed the passion onto his son, who’s an accomplished ink-master as well as an award-winning painter – Leslie even made the final of the Archibald Prize in 2012 for his portrait of the world’s most-tatted man, Lucky Diamond Rich. LDF has two classic studios in Sydney’s inner-west – one in Newtown and one in Marrickville, suburbs known for their commitment to art and culture – with more than a dozen artists.

It’s not just tattoo aficionados who’ve heard of Bondi Ink after the beachside studio hit the small screen with its own reality TV series in 2015. That celebrity – plus the five talented in-house tattooists and the attention that comes with the likes of Zayn Malik passing through the chair – ensures that Bondi Ink is one of Sydney’s most popular studios.

This Balmain studio has 10 terrific resident artists that specialise in old-school American tats, as well as an impressive rotation of esteemed guest ink-masters. The husband-and-wife-owned Darling Parlour – which also offers an on-site laser removal service – is an approachable option for tattoo first-timers as well as ink veterans who want to talk through their bespoke design with the friendly staff. 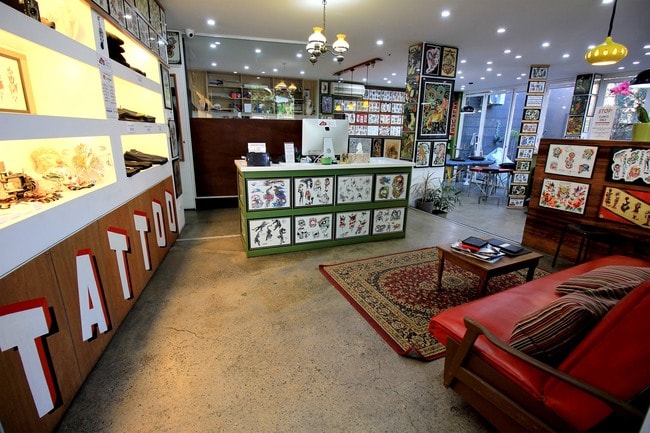