The 8 Australian Artists You Should Know 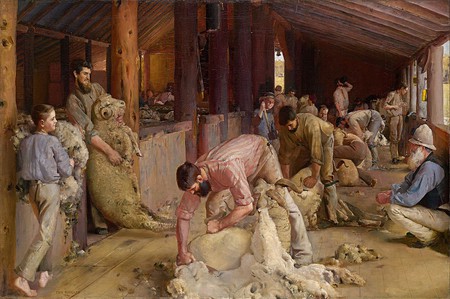 Throughout the 19th and 20th centuries, Australian art underwent a transformation from Colonial artistic expression to Antipodean figurative art, Australian Impressionism (also known as the Heidelberg School) and the surrealist Angry Penguins movement. The artists on our list paved the way for modern Australian art, and their work continues to inspire throughout classrooms and galleries. From Sidney Nolans’s iconic portrayal of Ned Kelly to Tom Robert’s Shearing the Rams and Peter Booth’s disturbing and nefarious paintings, we explore the masters of Aussie art and their most iconic pieces.

Sir Sidney Nolan was born in Carlton in 1917 and went on to become one of Australia’s most prolific artists, known for his surreal take on all things Australian – from the Outback to Aussie iconography. He joined the Angry Penguins artistic movement in the 1940s and is responsible for painting the cover of the Ern Malley edition published in June 1944. While living at Heidi (Heidi Museum of Modern Art), Nolan began to paint his iconic Ned Kelly series. The collection traces the Kelly story; however, it was not intended as a true portrayal of the events which occurred. Instead, it burrows through the story into themes of injustice, love and betrayal. Nolan also portrayed Burke and Wills and Eliza Fraser. Another of his iconic paintings, Footballer (1946), is on display at The Ian Potter Centre in Federation Square. 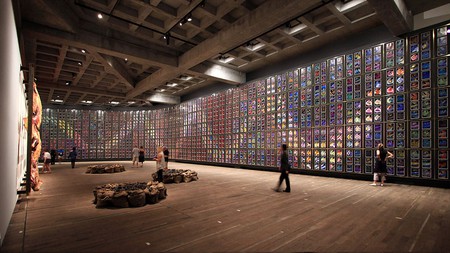 Although Peter Booth is regarded as an Australian artist, it was his childhood spent in the industrial city of Sheffield, England that gave his artwork its morbid quality. Booth presents viewers with ominous paintings of both urban and rural Australian landscapes in a state of surrealism. Intensely figurative, the wastelands and hybrid creatures in his paintings act to unsettle and disturb, and much of his work portrays oppression as well as mankind’s nature to destroy. Painting (1977) is on display at the National Gallery of Victoria and features esoteric symbolism and is one of Booth’s least sinister pieces.

Born in Murrumbeena in 1920, Arthur Boyd belongs to the artistically influential Boyd dynasty, and his voice is amongst the most allegorical in Australian modern art history. His oeuvre includes paintings, ceramics and graphic art which often depict humanitarian issues and biblical excerpts set among a typically Australian backdrop. A member of the Antipodeans movement, Boyd’s work emphasized the importance of figurative arts, and his canvases often balanced impressionism with expressionism. Two of his most seminal collections are Brides, which depict the segregation of mixed descent Aborigines, and the Old Testament tale of Nebuchadnezzar. The National Gallery of Victoria is home to the work of Arthur Boyd including Shearers playing for a bride (1957). 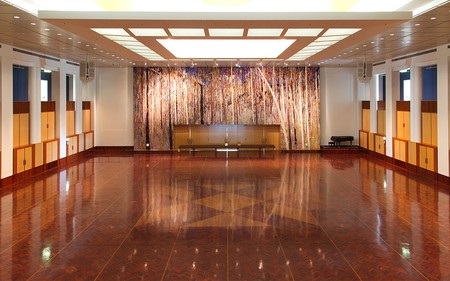 Also a member of the Antipodeans movement was South Melbourne-born John Brack, whose work characterized the human condition and Australian life in bleak tones and stark lines. His iconic painting Collins St, 5pm (1950) perfectly captures the drone-like conformity of working Australians and is now located at the National Gallery of Victoria. Another of his iconic paintings, The Bar (1954), is a portrayal of the six o’clock swill which sold for $3.17 million. Both these paintings as well as much of his other work feature brown voids and mustards which convey an austere quality.

Belonging to the 19th-century Heidelberg art movement, British expat Tom Roberts is the artist behind Australia’s most recognizable paintings: Shearing the Rams (1890), which is on display at NGV, as well as The Big Picture (1903), which depicts the first sitting of Australian Parliament at the Royal Exhibition Building in Melbourne on the 9th of May 1901. Robert’s work illustrates the bush and blue-collared workers through Australian Impressionism, and this is most visible in Shearing the Rams which gives onlookers an insight into the Brocklesby sheep station and the Australian wool industry. Roberts was also an advocate for en plein air painting after his time spent in Europe, and his oil landscapes capture rural life in great detail.

Looking at the great depth in Drysdale’s drought-plagued landscapes, you would never guess that he was blind in one eye, the left to be more specific. After migrating to Geelong from England in 1923, working on rural properties in Queensland and Victoria and studying in London and Paris, Drysdale then returned to Australia and began painting desolate scenes including Walls of China (1943) and The Cricketers (1948), which was named by the Sydney Morning Herald as ‘the most famous Australian painting of the 20th century.’ It depicts three boys playing cricket in an isolated Outback town.

Another member of the Heidelberg School art movement was Frederick McCubbin, who is known for his triptych The Pioneer (1904), which he painted outside his family home in Mount Macedon. Born on King Street, McCubbin sold his first painting in 1880 and became an art scholar of the School of Design at the National Gallery in 1888. After moving to the Fontainebleau house in Mount Macedon, he painted The Pioneer, which is now on display at The Ian Potter Centre. Mount Macedon was also the only place that he ever depicted fairies in his work. In March 2016, his painting An Old Politician (1879) was discovered in a private bank vault after not having been seen since the 1880s, and with this recent finding, the legend of one of Australia’s art masters lives on. 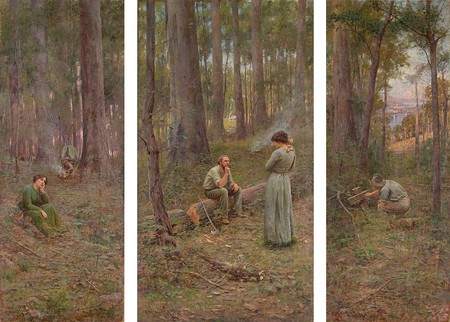 From abstract aerial landscapes to figurative frogs, John Olsen’s body of work is always playful in style and seems to transcend the canvas, although, at 88 years of age, Olsen rejects the notion that he is an abstract artist saying ‘I have never painted an abstract painting in my life.’ Born in Newcastle in 1928, Olsen studied in Sydney before travelling through England, Paris, Portugal, Spain and Majorca, and it’s apparent that these European countries gave his work a Mediterranean flair. Notable works include Salute to Five Bells (1973), which was inspired by the Kenneth Slessor’s poem and is currently on display at the Sydney Opera House, and his Lake Eyre series which explores the lake as mental landscape.