Where To Find The Best Coffee In Sydney, Australia 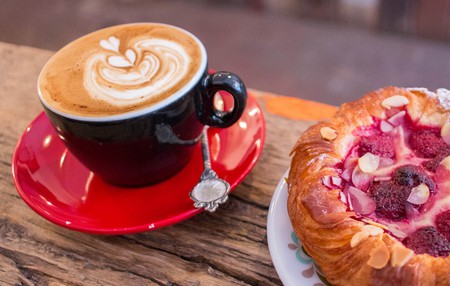 Australia is known for its remarkably diverse cafe culture and Sydney, long overshadowed by ‘trendier’ Melbourne, is now home to some of the most exciting purveyors of specialty coffee in the country. Take a coffee tour around the city and discover why people are happy to queue for 20 minutes to get their favorite brew.

The urban sprawl of Sydney means there is no single ‘coffee hot spot’, unlike perhaps London’s Soho district or Melbourne’s North Side. It only takes a quick look at the most awarded cafes in Sydney to discover the scope of it; The Grounds of Alexandria is hidden in a gargantuan industrial area, Bean Drinking is quietly nestled up in a North Shore village and Circa has won Sydney Morning Herald’s ‘Café of the Year’ award despite living far away from its competitors in Parramatta. Despite this, the cafes are all recognized as belonging to the melange of personalities which band together to create a true coffee culture. 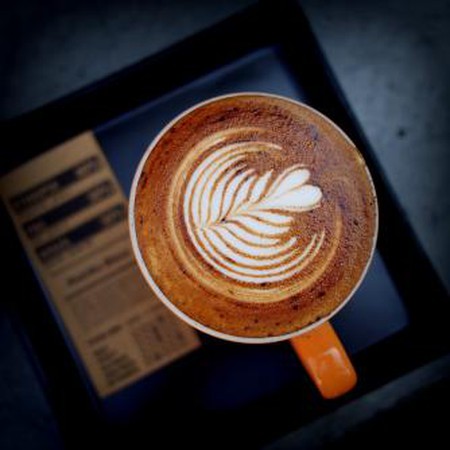 As the popularity of espresso grew during the 1960s, Australians quickly fell in love with not only the sensory experience, but also the background of the drink, imported from far-off worlds like Brazil, Guatemala and Ethiopia, then roasted and served by migrants who were eager to share their passion.

Café Hernandez opened its doors in 1973, when owner Joaquin Hernandez brought his love for sourcing and roasting coffee to Sydney from his home in Spain. Joaquin and his son Keno operate two very busy branches of their cafe in Darlinghurst and Kings Cross, the latter store open for business 24 hours a day, seven days a week. Apart from introducing an early appreciation for the finer aspects of coffee preparation to Sydneysiders, trailblazers such as Hernandez gave rise to places where people could unwind and relax between work and home.

Specialty coffee was still relatively unheard of in 2000. Toby’s Estate gave rise to a new level of sophistication in drink preparation. At about the same time, the Specialty Coffee Association was gaining popularity (Australian Paul Basset was crowned World Barista Champion in 2003), encouraging those in the coffee industry to focus their approach to coffee preparation to a meticulously scientific and artistic level. Through much collaboration between farmers, suppliers, roasters, baristas and customers, people began to discover that, just like wine, coffee can be deeply complex and when prepared correctly displays regional characteristics based on altitude, climate, soil and variety. 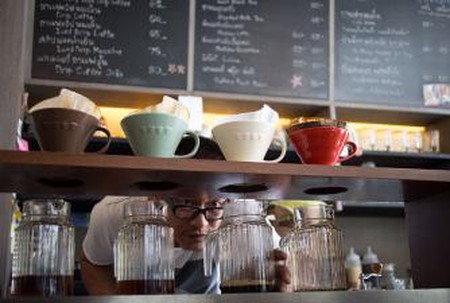 The Revival of Filter Coffee

With the rise of specialty coffee, offering customers ‘filter coffee’ may evoke imagery of American diner ‘drip’ or a cheap cup from McDonalds. Quite the opposite, filter coffee is now offered by most specialty coffee outlets as a way of showcasing outstanding single-origin coffees. The beans are only lightly roasted and are gently brewed without the use of pressure to yield what many first timers have likened to ‘coffee-tea’. The full spectrum of tastes and aromas of a particular coffee are showcased. There exists several methods of preparation such as Pour Over, Aeropress or Syphon. A proud moment for any barista is to see a customer’s surprised reaction as they discover that there’s no need for any milk or sugar – there’s enough flavor and sweetness contained within the beans alone. 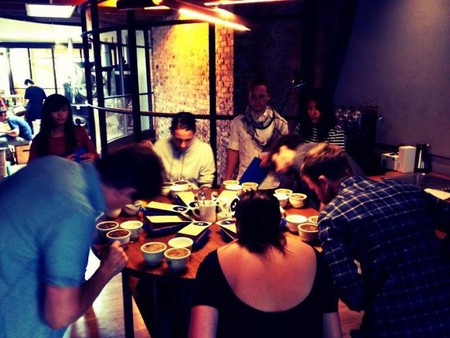 A striking interior where wall-mounted fluorescent tube lights clash with bare brick walls and reconstructed wooden tables, Reuben Hills houses an uber-cool coffee haunt fitting for its Surry Hills address. Owners Nathan Borg and Russell Beard have traveled extensively through South and Central America, visiting farms and setting up direct-trade agreements for their coffee supplies. To accompany the coffee, the food menu boasts influence from Honduras and El Salvador. Upstairs, a 30 kilogram Probat roaster churns out their signature blend of coffee beans, which are now used and enjoyed across the capital. Friday mornings see free coffee cupping (tasting) sessions for anyone keen to come along and sample the latest lots.

Echoing the recent trend of cafes that could be art galleries is Paramount Coffee Project (PCP). The interior design features sweeping stone surfaces that seamlessly house induction stovetops, polished wooden sinks and immaculate coffee equipment. You can’t help but feel a little dirty when you order a big squashy soft-shell crab burger (named the Po-Boy) but the hospitality and buzz quickly reassure anyone feeling intimidated. Paramount Coffee Project offer a unique take on coffee – they purchase the latest lots of raw coffee, send them out to guest roasters and then serve the results. Customers can expect an ever-changing coffee menu which highlights the seasonal roasts and variability of how coffee is treated from farm to cup.

Pablo & Rusty's, Castlereagh Street | © Mecca
A long time player in the specialty coffee movement, Pablo & Rustys have recently opened up their fifth venue right in the heart of Sydney’s financial district. From a small suburban cafe opened in 2006, the success of the company is owed to an unwavering commitment to specialty grade coffee and providing its customers with seasonal, traceable and ethical products. Pablo & Rustys’ coffee is roasted in smaller batches, allowing their roasting schedule to respond to their customers’ demands while also ensuring that every bean is prepared to maximize flavor.
Open In Google Maps
161 Castlereagh Street, Sydney, New South Wales, 2000, Australia
Visit Website
Give us feedback

Now with several venues in the middle of the city and countless new cafes using their beans, Mecca is the yardstick by which Sydney’s specialty coffee scene can be measured. Many customers are happy to walk the extra block and wait the extra time just to be guaranteed the best coffee in town, which is why Mecca will continue to thrive as the savior of the inner-city coffee break.

A small cafe with a big following, The Wedge keeps its customers excited by offering coffee from many different roasters. ‘The idea’, says head barista Gus Lindsay, ‘is to communicate a passion for the core product rather than an affiliation with a particular brand. This allows us to hand-pick what we think is best right now and share it with our customers.’ 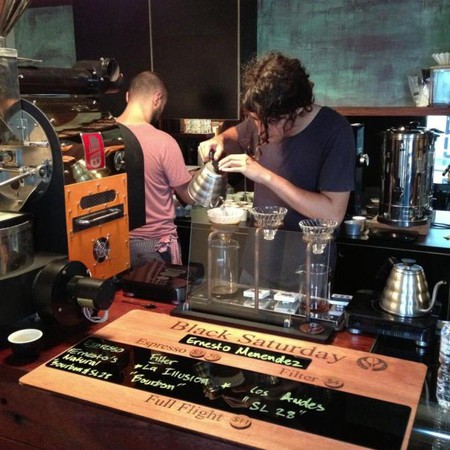 Cafe, Coffee Shop, Coffee
Facebook
Email
Twitter
Pinterest
Copy link
Share
Map View
Another tiny space with a big heart, Sample have recently come into the spotlight with ‘Black Saturdays’ – one day of the week where coffee is only served in its unadulterated form. Sample roast their own coffee and the cafe is widely praised not only for the taste of its brews but also for its friendly staff and atmosphere.
Open In Google Maps
1a, 118 Devonshire Street, Surry Hills, New South Wales, 2010, Australia
Visit Website
Give us feedback

A very recent addition to the ‘must-try’ list of cafes in Sydney is worth it for the view alone. Axil Coffee Co. is set on the water at Kirribilli, on the north side of the harbor, in a small wooden shack setup. Beautifully presented food and exceptional coffee allow a true stumble-upon experience for those traveling by ferry around Sydney.

The Grounds of Alexandria

Restaurant, Bakery, Australian, $$$
Facebook
Email
Twitter
Pinterest
Copy link
Share
Map View
Where a vast selection of quality products reflects a high consumer demand, The Grounds of Alexandria could be likened to a Disneyland of quality produce. Outside, customers can wait for a table by moseying around the outdoor section complete with a BBQ area, a vegetable garden, a florist, a children’s play area and even some farm animals, such as Kevin Bacon the pig. Inside, the Grounds pump out thousands of coffees in an industrial-sized space, complete with a gigantic kitchen, bakery, coffee lab and a coffee roastery. The Grounds of Alexandria is set away from most city happenings, but many will make the journey by car or bus just to be a part of the buzz.
Open In Google Maps
7a, 2 Huntley Street, Alexandria, New South Wales, 2015, Australia
+61296992225
Visit Website
Visit Facebook page
Give us feedback
Give us feedback