Redfern and the Gadigal of the Eora Nation 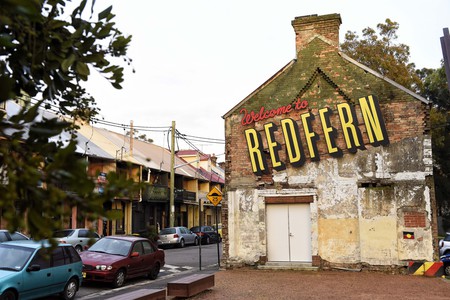 The 'Welcome to Redfern' mural is arguably the most well-known example of public Indigenous art in the neighbourhood. | © Adam Hollingworth / City of Sydney

The moment commuters hop off the train in Redfern – an inner-city suburb one stop south of Sydney’s Central station – they’re reminded of the oldest continuously living culture on earth. The 40,000 Years mural celebrates millennia of Aboriginal life, a culture that continues to play a huge part in modern Redfern.

“The biggest misconception that many, not all, non-Indigenous Australians have is that we are one people who are of the past,” artist Brenda L Croft tells Culture Trip.

“Nothing could be further from the truth, and thankfully, our histories and stories are being told by incredibly articulate, confident, talented trans-disciplinary cultural activists and practitioners across multiple platforms. 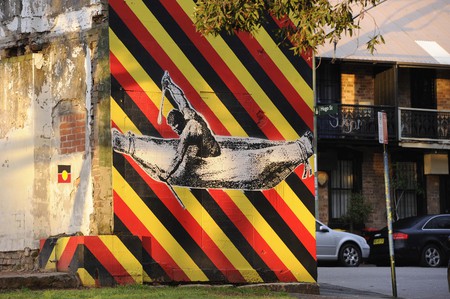 “We are very much of the here and now, reiterating our ancient knowledge into contemporary forms – the past informs the present and the future. Non-Indigenous Australians could learn so much from the world’s oldest continuous culture, particularly in these anxious times of global environmental insecurity,” says Croft.

Croft is one of many artists telling the stories of Australia’s First Nations in Sydney. And Redfern – Gadigal land belonging to the Eora nation – is the heart of the Harbour City’s urban Aboriginal community.

A Gurindji/Malngin/Mudburra woman from the Victoria River district of the Northern Territory, Brenda L Croft paid tribute to the Gadigal people through Wuganmagulya, an artwork that enshrines an Eora ceremonial site. The terrazzo work evokes rock carvings from the area, stretching along the promenade of Farm Cove on Sydney Harbour in Gadigal land. 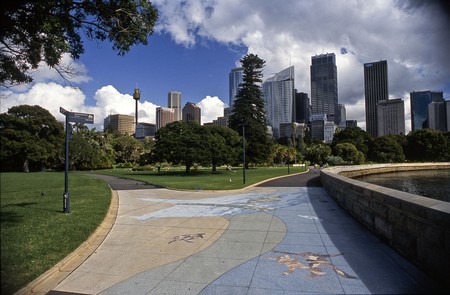 Wuganmagulya is a place where boys would go through initiation – one of many Indigenous cultural practices that are as diverse as the groups themselves. The continent housed hundreds of nations when Britain began colonising the territory in 1788, and their respective traditions proved resilient. Aboriginal culture is not one homogeneous blob; it’s made up of countless distinct communities that are alive today.

“This continent and its islands remain Australian First Nations land, always was, always will be,” Croft says. “Regardless of our cultural affiliations or where we live, we retain strong connections with our communities and homelands. We have always shared our deep knowledge and will always be connected to our customary homelands, no matter what has been done to the landscape, or how badly treated it has been since the first days of colonial contact.”

The Gadigal people, whose territory spans the area south of Sydney Harbour, including the CBD (Central Business District) and Redfern, were one of several clans that made up the Eora nation, which covers modern-day Sydney. With only a small group in the first place, just a handful of Gadigal survived the early years of British colonisation after European diseases like smallpox ravaged the Indigenous population. 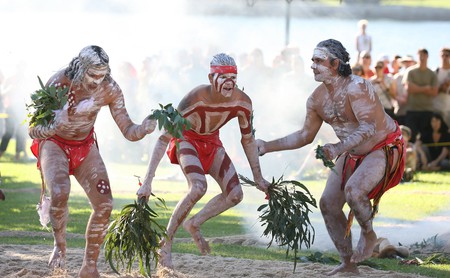 Only a handful of Gadigal survived British colonisation and performances such as these, demonstrated during the Australia Day celebrations, are vital for keeping the culture alive | © Helen Nezdropa/The Sydney Morning Herald/Fairfax Media via Getty Images via Getty Images

However, Gadigal culture survived in the face of colonisation. Aboriginal elders estimate that a few hundred Eora people are alive today, including a number of Gadigal, joined by generations of Indigenous people who migrated from around New South Wales and all over Australia to the Harbour City.

Many chose to call Redfern home, and the neighbourhood maintains deep ties to Indigenous culture in the new millennium. Although this once-deprived neighbourhood is rapidly gentrifying, the Aboriginal Housing Company (AHC) – better known as the Block – cemented the suburb’s standing as the centre of Sydney’s urban Indigenous population.

“What is significant about the Redfern community,” explains Maggie Roche from Redfern Oral History, “is that as people regrouped, it became a hugely significant centre of resettlement, and people gravitated here from country areas.”

Snaking along Lawson Bridge opposite the gates of Redfern station, the 40,000 Years mural captures the past, present and future of Australia’s First Nations people, especially those belonging to Redfern’s 2016 postcode. As well as ancient footprints and the rainbow serpent, the mural enshrines modern heroes like the champion Redfern All Blacks rugby league team and local legend Aunty Mona Donnelly from the Aboriginal Medical Service.

Painted by a band of local artists led by Carol Ruff in 1983, the piece was restored by the Redfern Station Community Group in 2018. It borrows its 40,000 Years motif from Joe Geia’s 1980s song of the same name, although it’s now widely known that Aboriginal culture has, in fact, been around for more than 60,000.

This masterpiece used to gaze over another mural of a giant Aboriginal flag down Eveleigh Street, which was demolished in 2019. It was painted in 2000 by prized kickboxer Alex Tui on the side of his iconic Tony Mundine Elouera gym, but the building was knocked down to make room for a high-rise student accommodation. It’s a sign of the times – private property developers, cashed-up international university students and soaring rents are forcing Sydney’s urban Aboriginal communities to the city’s margins.

“[The 40,000 Years mural] was really faded for a lot of years but it still had that meaning to a lot of people,” the Redfern Station Community Group’s Donna Ingram said during the restoration.

“And I guess with the gentrification of Redfern and what’s happening, I think it’s really important that the working-class history and the Aboriginal history is still very strong,” says Ingram

Kamilaroi artist Reko Rennie teamed up with a bunch of local kids to paint his iconic mural on the Block – a now-empty Aboriginal housing project – in 2013. The larger-than-life masterpiece covers three sides of a classic Redfern terrace in red, yellow and black stripes (the colours of the Aboriginal flag), and greets viewers with a ‘Welcome to Redfern’ message on the fourth side. Indigenous art is often pigeonholed as just dot painting, but Rennie’s distinctly modern, geometric style smashes that stereotype. 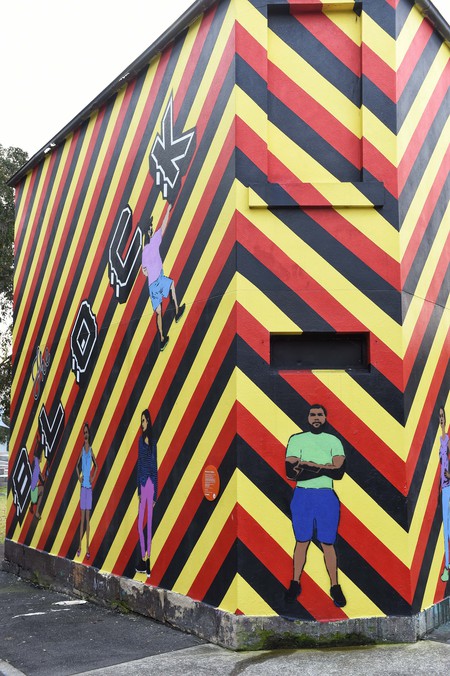 “We don’t have to be locked in to a particular style or identity because of other people’s views of what we should look like,” Rennie said during the mural’s creation. “I think it’s just important that you be true to yourself. You don’t have to act a certain way to be considered authentic.”

Three different artworks make up Fiona Foley’s Bibles and Bullets installation, part of the multi-million-dollar upgrade to Redfern Park in 2008. Intuitive Play invites young children to clamber over oversized native seeds, Possum Play provides a skate park inspired by native fauna, and Lotus Line – a fountain in the shape of a crucifix, symbolising the strength of Indigenous culture to survive colonisation – is inscribed with the famous speech given by former prime minister Paul Keating on this site in 1992. A Badtjala woman from Fraser Island in Queensland, Foley’s work sparks a conversation about race that Australians find difficult to have. 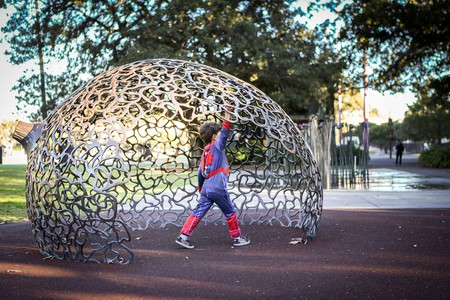 “That national conversation at some point must take into account the invasion and subsequent frontier wars of Australia and reparations to the sovereign Aboriginal nations of this continent,” Foley says.

“Racism in this country is a topic we like to avoid discussing but it manifests itself everywhere. It is a societal burden I’ve learned to carry. That gaze wrapped up in judgment from a white society and white individuals.

“This country carries deep wounds from the trauma of these frontier wars. We carry it inside our souls whether we are conscious of them or not… this brutality in turn has affected the perpetrators and their descendants.

“Art and politics have had an uneasy relationship in this country,” says Foley. “My life has been about the fight for justice for Aboriginal people and telling the true history of Australia. My platform has been through the visual arts.”

Other Indigenous art installations around Sydney

Within Redfern, United We Stand, Divided We Fail The Future, a kaleidoscopic backdrop to the Hugo Street Reserve, is another street-art installation to check out, while small galleries like Blak Douglas’ Blakspot introduce visitors to contemporary Aboriginal works. The industrial-chic Carriageworks venue also regularly showcases Indigenous artists.