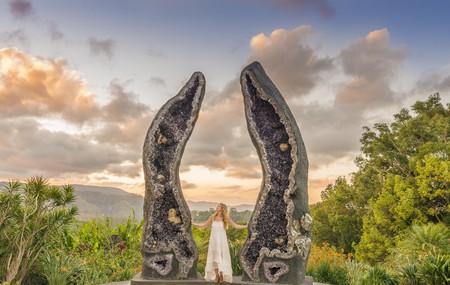 Australia’s Crystal Castle is located in the Byron Bay hinterlands of New South Wales. The underrated tourist attraction is home to the world’s largest amethyst cave, and the world’s biggest (and most beautiful) crystals. Here’s an introduction to this amazing place in Australia, where you can discover a deeper spiritual connection.

Naren King bought the architecturally-unusual building that locals nicknamed “the castle” in 1986. This is where he started Crystalight, Australia’s first direct importer of quality natural crystals from around the world. As Byron Bay is known for its hippy roots, it wasn’t long before residents and visitors learned of his venture. Naren then decided to open for limited trading to the public. He has spent over 30 years travelling the world to find the best crystals. 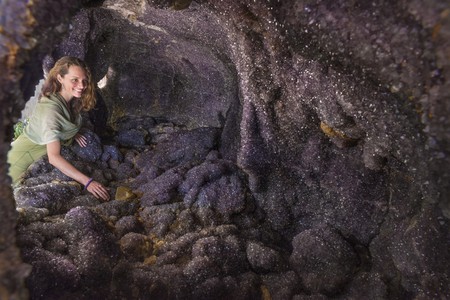 The crown jewel of Crystal Castle is the Enchanted Cave, the world’s largest amethyst cave formed over 120 million years ago in northern Uruguay. When a giant bubble formed inside a molten lava flow, the pressure, heat and iron combined to make millions of tiny amethyst crystals grow. A Uruguayan farmer found the massive geode, and Naren flew to inspect it. It’s approximately 5.5 metres (18 ft) wide and weighs about 20 tonnes.

On the official website, Naren says, ‘We found this geode so awe-inspiring, we knew we had to bring it home. This magical creation of nature is our gift to the Crystal Castle in her 30th year. We hope you enjoy seeing what is the largest amethyst cave ever discovered in the world.’

Crystal Castle is also home to the world’s biggest crystals – a breathtaking pair of 5.5-metre (18-ft) smoky quartz geodes, also purchased from a Uruguayan farmer. They stand as sentinels watching over the castle, and include sprinklings of amethyst and calcite crystal flowers.

There’s the option to do an Enchanted Cave Immersion Experience, where you (and up to three friends) can meditate inside the amethyst cave. Experienced facilitators guide participants on a ‘deep inner journey’. Other daily experiences at Crystal Castle include the Daily Peace Experience, the Crystal Experience – an introductory workshop into using crystals, aura photos and tarot card readings, and the Shambhala Gardens tour. 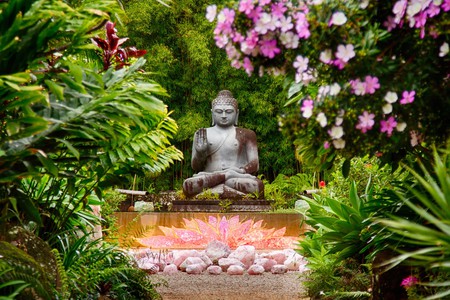 The Shambhala Gardens are home to the only Kalachakra World Peace Stupa in the Southern Hemisphere, which was blessed by His Holiness the Dalai Lama. There’s also a Buddha Walk, which has a four-metre Buddha, other hand-carved statues, and is lined with rose quartz because Naren has imported so much over the years. Other attractions at Shambhala Gardens include The Labyrinth, Damanhur Spiral, Reflexology Path, Forest of Friends and Family, and the Rainforest Walk.

Crystal Castle reviewers note that you can easily spend a full day at the property and still not see everything on offer. Fortunately, the Lotus Cafe is on-site for when you need to refuel after walking through the Shambhala Gardens.