15 Spectacular Views of Sydney from Onboard Its Ferries 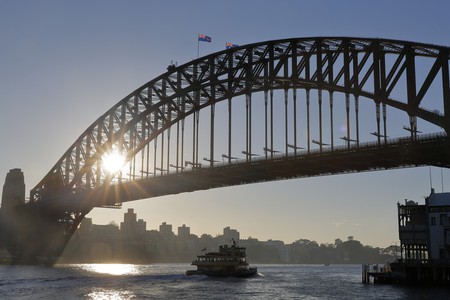 With crystal blue waters surrounding impressive city skylines, beaches and islands, ferries are the most-popular way to navigate Sydney’s waterways. Running at length between all major tourist destinations, and a regular means of transport for locals, it comes as no surprise that some of the most spectacular views of the city have been captured aboard Sydney ferries. Here are the top 15.

From this angle, the intricacy of the stunning Sydney Opera House designed by Danish architect Jørn Utzon is exposed; step things up a notch by taking in the view from a Sydney ferry to see the design in its full glory.

Capture the sun setting over the city from the sanctuary of a Sydney ferry. Even if its just to ride there and back; it sure is worth it for the view at dusk.

Take in the impressive beauty of the Sydney Harbour Bridge, one of the continent’s most notable structures at leisure from a Sydney ferry. Even if it’s just jumping the water to Taronga Zoo, views aboard are better than any other place.

Take in Sydney Harbour’s larger tenants aboard a Sydney ferry as they dock in one of the world’s most recognised harbours.

Lap up warm summer hues of pink and marmalade as the sun sets aboard a Sydney ferry. Hate to admit it, but this will be the appropriate time to use that Instagram hashtag #nofilter that has been infamous on social media.

The trip home from the new office isn't bad!

Catch a panoramic shot of the Sydney city skyline at ease, with ferries making waves in the waterways from dawn until dusk.

Being a proper tourist

Against the backdrop of the setting sun, catch the silhouette of Sydney city, a breathtaking photo op for tourists and locals alike.

Approach the spectacular Sydney amusement park, Luna Park on a ferry right from Circular Quay. It’s one sure way to build the excitement!

Sail into serenity catching colourful sun-setting skies on a Sydney ferry; although these are valid modes of transport to and from suburbs, going along for the ride seems just as fitting when the backdrop looks like this.

See this world-class concert hall against a canvas of pinks and orange as the sun sets in Sydney. Hop on a Sydney ferry to make the experience all the more memorable!

Make a day trip all the more adventurous with a ride aboard a Sydney ferry, they’re not just cost-effective and fast, but they boast some of most stunning scenery the city has to offer.

Get lost in a kaleidoscope of colours from blue and red to pink and yellow, making this stunning city even more memorable from the deck of a ferry.

Take in Sydney’s Central Business District and larger cruise ships which dock in the harbour aboard a Sydney ferry for a stunning photo op from a new perspective.

Relish the beauty of the Sydney Opera House and surrounding city skyline as the sun sets aboard a Sydney Ferry.

Say goodnight to Sydney as the sun sets on one of the most beautiful countries in the world.