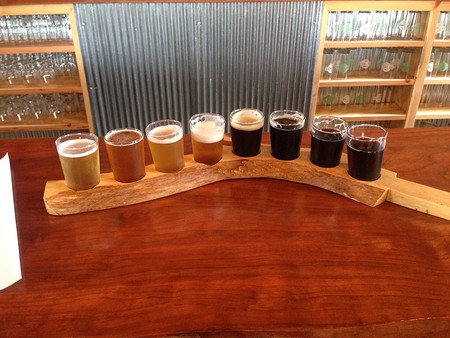 Just like the rest of the United States, the number of craft breweries in West Virginia has grown almost exponentially in the last twenty years. There are now over twenty breweries, all with a distinct West Virginia flavor that comes from the combination of fresh mountain spring water and a love of having a good time. Here are the ten best breweries across the state.

Just down the street from the flagship Mountain State Brewing Company in Thomas, West Virginia is Stumptown Ales in Davis. Tucked into a corner bar on the short main street, the taproom is crowded with skiers and snow bunnies in the winter and hikers and bikers in the spring and summer. The husband and wife team behind the brewery offer hoppy Indian Pale Ales, typical of the craft-brew industry, plus some really thick and delicious porters and stouts.

Located about an hour south of Thomas and Davis in Elkins, West Virginia, Big Timber Brewing has established themselves in the craft brewing market. Started in 2014, the brewing has become a favorite among locals and those lucky enough to get a pint or a four-pack of their tallboy cans somewhere else in the state. They offer six beers year-round and seasonal specialties, and stumble in on the right night and you might hear some local live music too.

With the third brewery on this list named after the forest industry, you might be starting to understand how important the trees of West Virginia are to the economy – both as lumber and a place for recreation. Chestnut Brew Works was started in 2013 south of Morgantown, and due to popular demand, opened a tasting room in downtown Morgantown. Guests love the friendly environment and the bar has quickly become a favorite spot in town.

In West Virginia, brewing seems to be a family business – Short Story Brewing being another family-run brewery just south of Morgantown in Rivesville, West Virginia. With a IPAs, a stout, and an amber, you’re sure to find something you like, and if you want to try a little of everything, you can get a flight served in an old library card catalog drawer.

We love our WV Craft Beer family so much we created a map for you to visit us all! See our Facebook page for full poster. Feel free to share. (#13 is actually in Charleston) . . #wvcraftbeer #beermap #roadtrip #pickadriver #drinkresponsibly #wv #onlyinwv #brewerytour #brewery #brewtour #beer

A post shared by Greenbrier Valley Brewing Co (@greenbriervalleybrewingco) on Feb 3, 2018 at 10:32am PST

The New River Gorge is a West Virginia landmark and a must-see (almost) like no other place in the state. And while you’re in the area, check out Bridge Brew Works, a very small brewery located between Beckley, West Virginia and the Gauley River National Recreation Area. After a day exploring the wilderness on the river rapids or trails surrounding the river, the brewery is the perfect place to grab a drink.

With names like Wild Trail Pale Ale, Mothman Black IPA, and Devil Anse IPA, the owners and brewers at the Greenbrier Valley Brewing Company take a lot of pride in the lore of West Virginia. In addition to drinking the beers in the taproom near Lewisburg, West Virginia, you can find their beers canned and for sale in stores across the state.

A post shared by Greenbrier Valley Brewing Co (@greenbriervalleybrewingco) on Jan 20, 2018 at 6:08am PST

Even in the small towns in the eastern panhandle of West Virginia craft breweries have been popping up. In Charles Town, on the Maryland border near Harper’s Ferry, Mash Brewing Company has free tastings of their IPAs, ales, and stouts with growlers to-go, but no bar.

Close to Charles Town, the Berkeley Springs Brewing Company is expanding from a tasting room with growlers for sale to a full brew pub. You can also find their beers on tap in restaurants in West Virginia and Maryland.

Even though the BrewPub is closed until spring, the beer is still flowing at bars and restaurants in West Virginia and Maryland. Don’t forget to follow us on Untappd and log in those beers! #beer #untappd #WV #MD #independentcraftbrewery

As one of the longest operating restaurants in West Virginia, the North End Tavern and Brewery has a reputation to uphold. First opened in 1899, the tavern in Parkersburg, West Virginia started brewing beer in 1997, making it the oldest craft brewery in the state. At the tavern, you can get a pint of their award-winning classic beers, or a sampler of the current offerings.