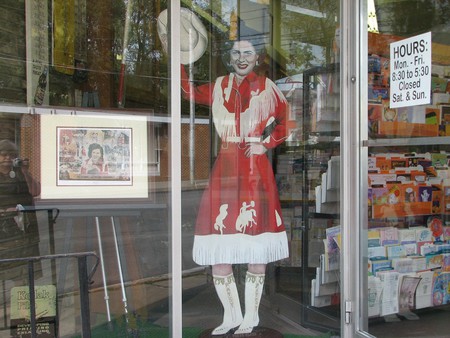 The Rainbow Roadhouse, which sits along Route 340 outside Charles Town, West Virginia, seems unassuming at first glance. But take a moment, look up, and you’ll see the giant neon rainbow arrow on the roof. Welcome to the legendary country music bar that inspired Patsy Cline’s career.

Patsy Cline was born in 1932 in Winchester, Virginia, just south of the West Virginia-Virginia border, and grew up at a time when country music dominated the airwaves. Despite her lack of formal training, she played guitar with the hope of becoming a country music star. Starting at age 16, she got gigs at barn dances, local radio stations, drive-in movie theaters, and beer joints, like the Rainbow Road Club. Eventually, she played with a local country music star, and landed a spot on the Jimmy Dean Show. Soon after her appearance, she moved to Nashville and had hits including “Walkin’ After Midnight” and “I Fall to Pieces.” But tragedy struck in 1963, when Patsy died in a plane crash at the height of here career.

Cline continued to be a hometown hero in the Charles Town and Winchester areas of West Virginia and Virginia. In 1985, the roadhouse along Route 340 – then known as the Orchard Inn – became the filming location for Sweet Dreams, a biopic about Cline’s life starring Jessica Lange.

The Rainbow Road Club is still open daily, and serves classic bar food and dinner. Next door is the Rainbow Road Diner and Truck Stop, which offers breakfast, lunch, and dinner. The club hosts live country music bands on Saturday nights, and everyone’s welcome to step down to the dance floor.

If you’re inspired to check out this historic country music landmark, visit before it’s too late. For years, the West Virginia Department of Transportation has discussed widening the two-lane Route 340 to deal with traffic in the area, and Rainbow Road is in the expansion path. The current owner, Larry Ruffner, says they promise to stay open as long as possible.