Where to Go Glamping in Tennessee 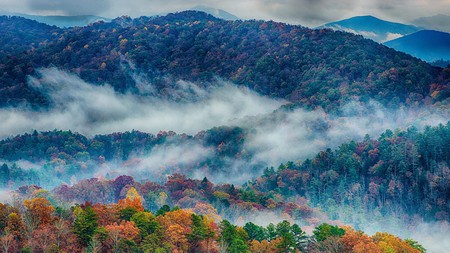 Tennessee may be known for its musical heritage, but the great outdoors also beckons, particularly in the east, as it’s fringed by the forests of the Great Smoky Mountains. There are also immense rivers, including the Mississippi and the Cumberland, with streams, creeks and lakes punctuating the landscapes. Sound idyllic? We’ve picked out some of the top places to explore and a stylish site or two nearby to glamp. 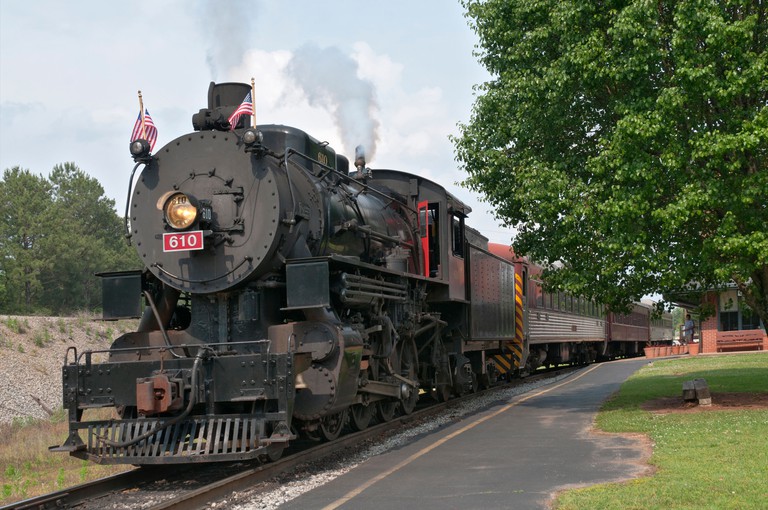 © Stephen Saks Photography / Alamy Stock Photo
You won’t run out of things to do in this charming town, with museums including the Tennessee Valley Railroad Museum, as well as restaurants and shopping, plus scuba diving and snorkeling in nearby Loch Low-Minn. The Hiwassee River Rail Adventure takes you over the Hiwassee River Gorge to the top of the Hiwassee Loop, where tracks cross over themselves as they corkscrew up the mountain. The Tsoli Notch vineyard is nearby, where you can stock up on a tipple of your choice. 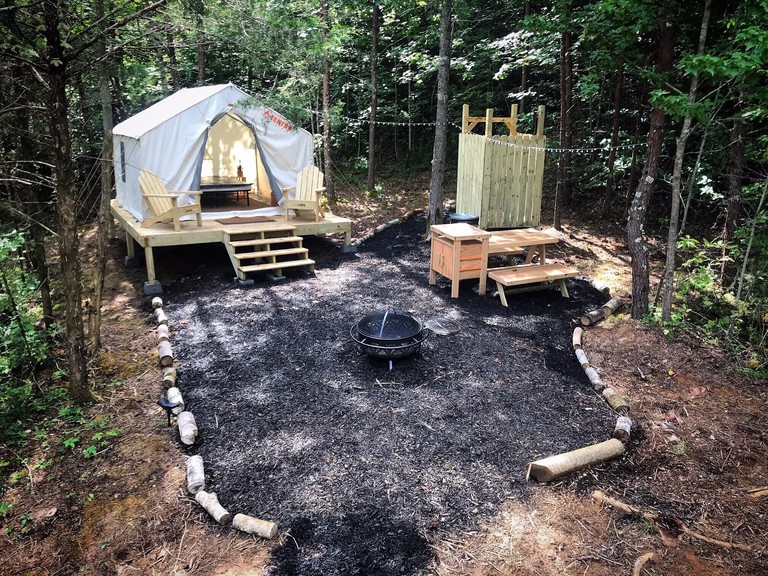 Courtesy of Olde English Farm / Expedia
Book Now
At the base of the Appalachian Mountains is a special campsite where you can clear your mind in a pristine environment. There’s high-quality fishing at the nearby creeks and ponds. There’s also trout fishing at the Tellico Trout Hatchery 15 minutes away, plus shopping and restaurants in the same town. Kayakers can challenge themselves on Class III-IV white water on the Tellico and Bald Rivers or take on the Ocoee River, which also has great white-water rafting. Portable toilets and sun-warmed showers are available at the campsite. 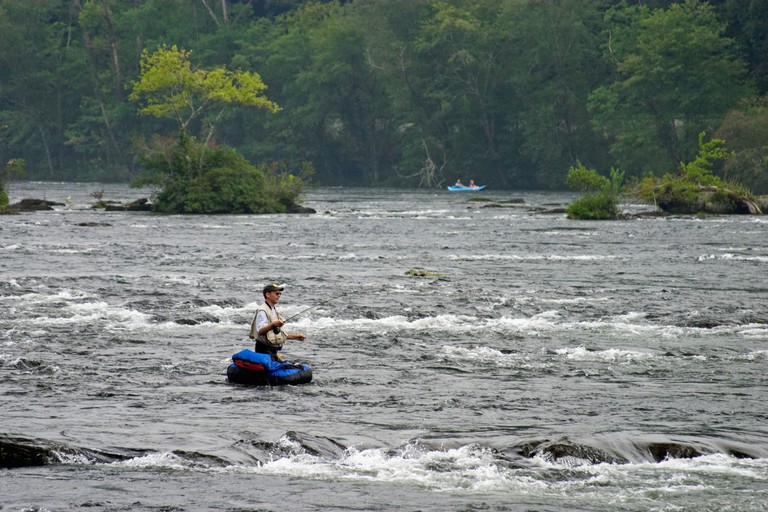 © Harold R. Stinnette Photo Stock / Alamy Stock Photo
Lying on the border between Tennessee and North Carolina, this charming mountain village is near the Hiwassee River and is dissected with gurgling creeks and streams. The scenic Turtletown Creek Falls Trailhead is just minutes away while the nearby Salty Dog Gem Mine is an engaging activity. For keen fishing enthusiasts, there’s an angling shop in Tellico Plains. 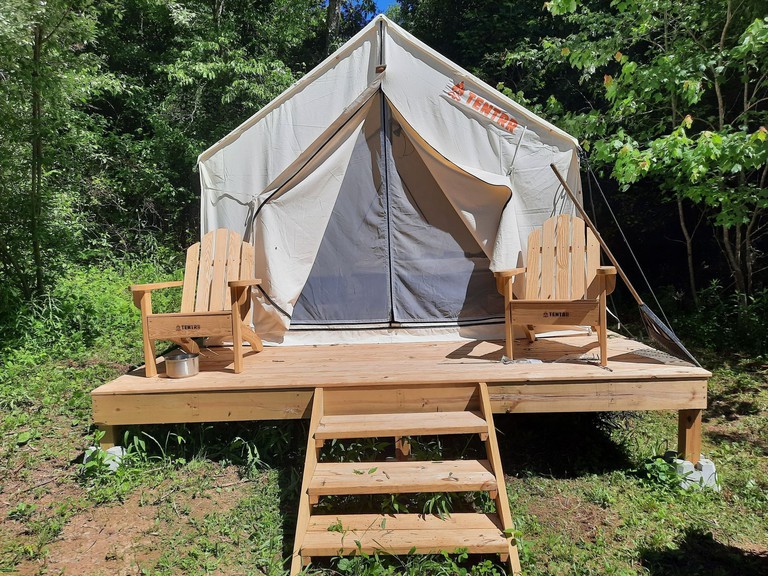 © Harold R. Stinnette Photo Stock / Alamy Stock Photo
Book Now
The Hiwassee Hideout provides the opportunity to escape the stress of everyday life in a beautifully secluded setting. The campsite is nestled in the Cherokee National Forest but it’s not far from the owners of the property. You’ll wake up to the trickle of a creek and choose a scenic spot to hang your portable solar-powered shower while you look out over an inviting valley (there are also portable toilets and a water supply on site). Cook breakfast on your own campfire before exploring the public forest all the way to the Hiwassee River. Nearby hiking trails include Turtletown Falls and John Muir. 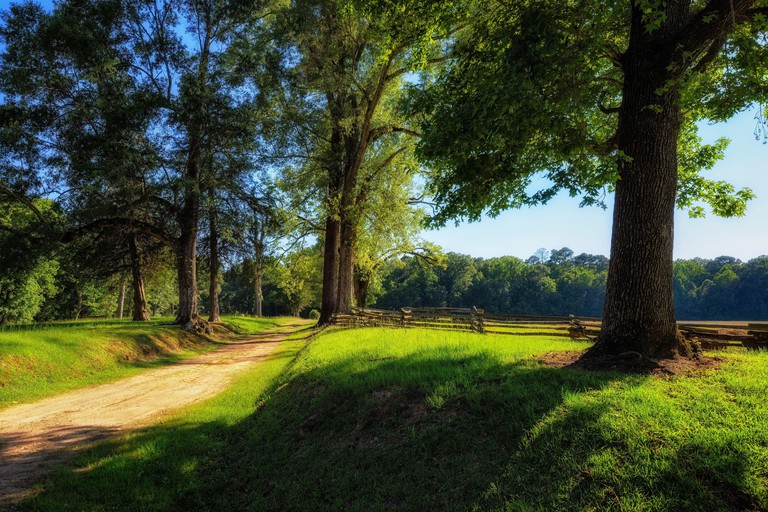 © Dee Browning / Alamy Stock Photo
The Natchez Trace Parkway is a blissfully scenic road through Tennessee and Mississippi which follows a 10,000-year-old route created first by bison and then used by Native Americans. The trail avoids valleys and hollows where the bison would have risked being hunted by predators. Beginning near the music capital of Nashville and ending in Natchez, it is 444mi (715km) in total. Natchez is also home to more than 500 antebellum and plantation homes.

The Rest on Dobbins Creek in Leiper’s Fork, Tennessee 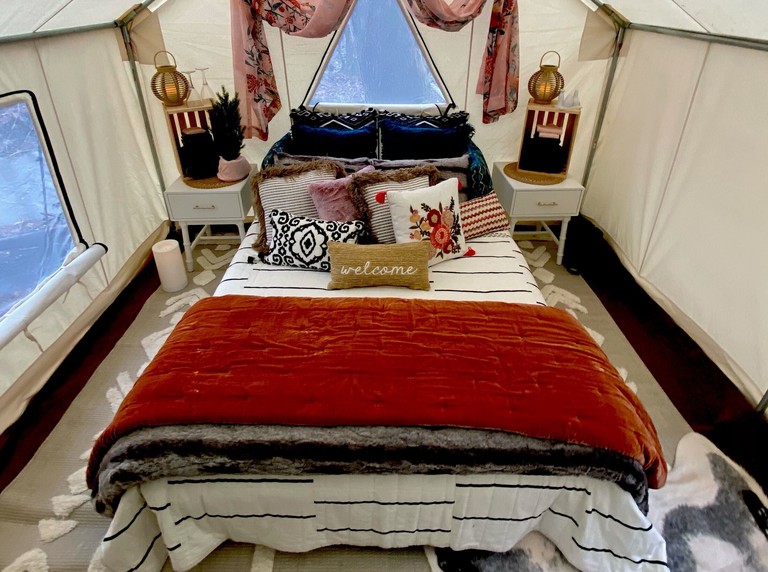 Courtesy of The Rest on Dobbins Creek / Expedia
Book Now
For a camping experience that combines beautiful surroundings with nearby restaurants, shopping and cultural happenings, you won’t be able to beat the Rest. Set on a delightful, dappled creek among the trees, it has plenty of creature comforts – a queen bed in a spacious canvas tent pitched for you; a fire pit and campfire grill; a portable toilet and shower; bottled water and electricity nearby. It’s in shouting distance of Puckett’s live music venue and bar, 20 minutes from historic Franklin and an hour from Nashville. 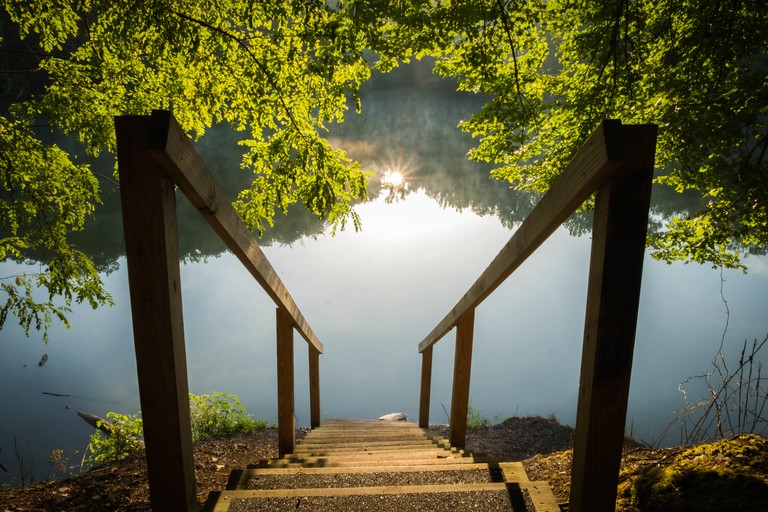 © Samuel Ray / Alamy Stock Photo
This town is best known for an enormous furnace that was constructed to try to turn coal into iron ore. It was only in operation for a few days but the Fiery Gizzard furnace is now a monument. Fiery Gizzard is also the name of a scenic walking trail that begins in Tracy City and is part of the Grundy Lakes State Park, renowned for spectacular waterfalls, diverse terrain and beautiful forests. 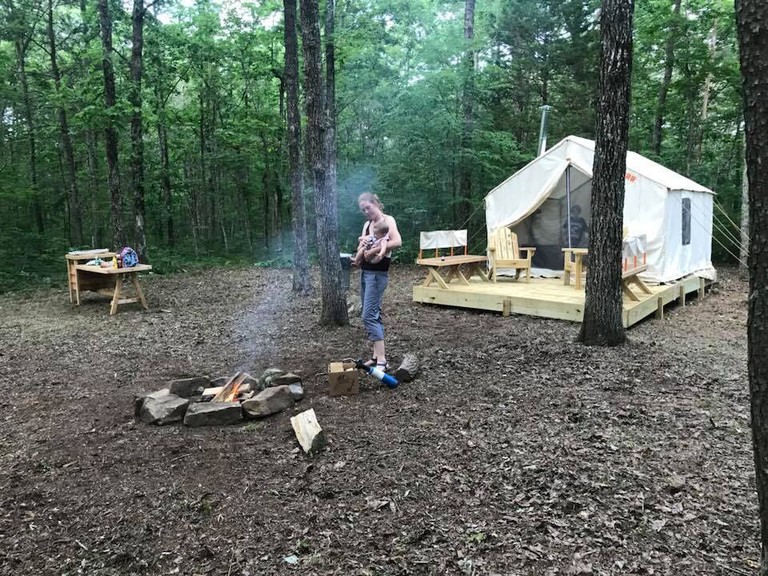 Courtesy of Cove Creek Forest / Expedia
Book Now
Perhaps the best thing about camping on a farm is access to fresh supplies should you be so inclined, including pork chops from pasture-raised pigs and ground beef from grass-fed cows. Campers are invited to take a self-guided tour around the farm, though their pets must be on a leash. This campsite is deep in the woods but has a portable toilet and shower, plus cooking facilities, and it’s also near some spectacular hiking trails, mountain biking and rock climbing, and not far from town. 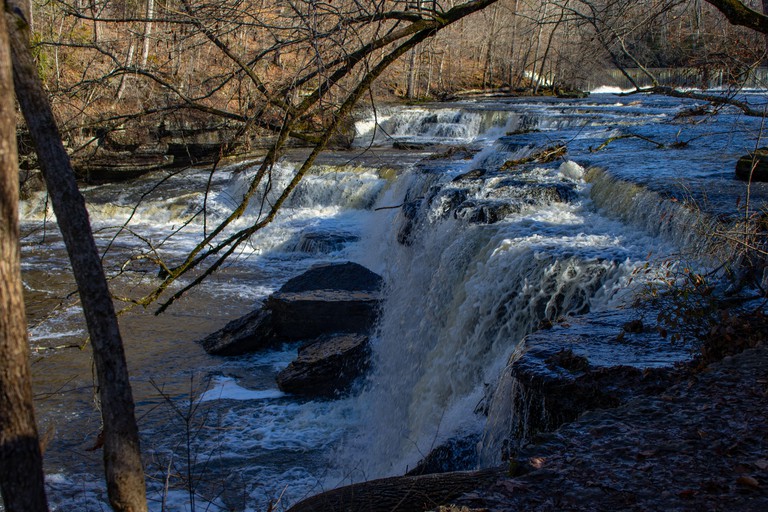 © Jacob Day / Alamy Stock Photo
The Old Stone Fort Archaeological Site in Tennessee is spread over an 876-acre (350ha) area and is the location of a Native American stone building constructed between 1,000 and 1,500 years ago. Archaeological excavations and study concluded the building was built slowly and, therefore, likely used for ceremonial functions rather than defence. Built on a peninsula created by the confluence of the Duck and Little Duck Rivers, the park lies on the Cumberland Plateau, creating many beautiful waterfalls where the rivers flow over the gorge. 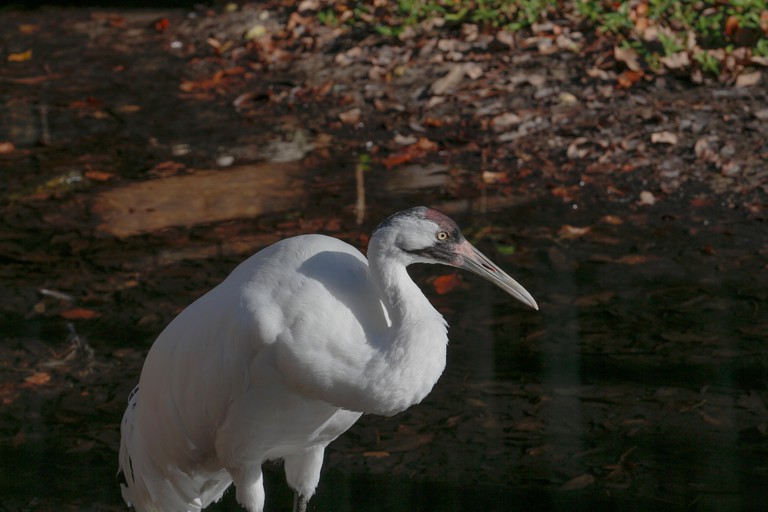 © Tom Stack / Alamy Stock Photo
Book Now
On the picturesque Cumberland River and only 12mi (19km) from downtown Nashville, this riverside farm campground is blissfully quiet. The farm has three ponds that attract birds including herons, kingfishers and even whooping cranes in the winter. Bald eagles are also spotted from time to time – but they’re the only ones allowed to hunt here. You can hire a kayak and your own dock from the camp keepers and fish if you have a Tennessee license. There are basic toilet and shower facilities available. As the site is a working farm, it’s not pet-friendly. 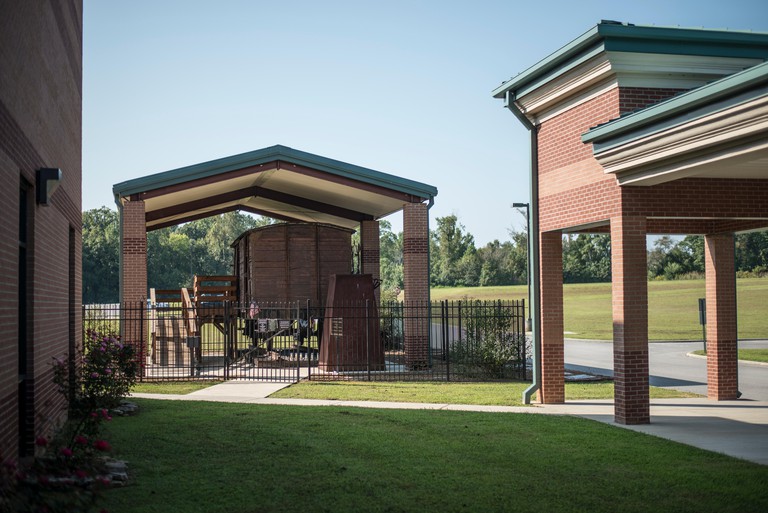 @ moris kushelevitch / Alamy Stock Photo
Bordering Georgia, Whitwell is at the base of an escarpment of the Cumberland Plateau known as the Sequatchie Valley with its eastern border the Sequatchie River. This part of eastern Tennessee affords spectacular mountain scenery with hiking and rock climbing popular outdoor activities. Things to see include the Coal Miner’s Museum and the Paper Clips Project Holocaust memorial at Whitwell Middle School, where children collected paper clips to represent each Jewish person killed in the genocide, displaying them in a rail car that was used to transport Jews to Nazi concentration camps.

The Pepoon at Camp Chet 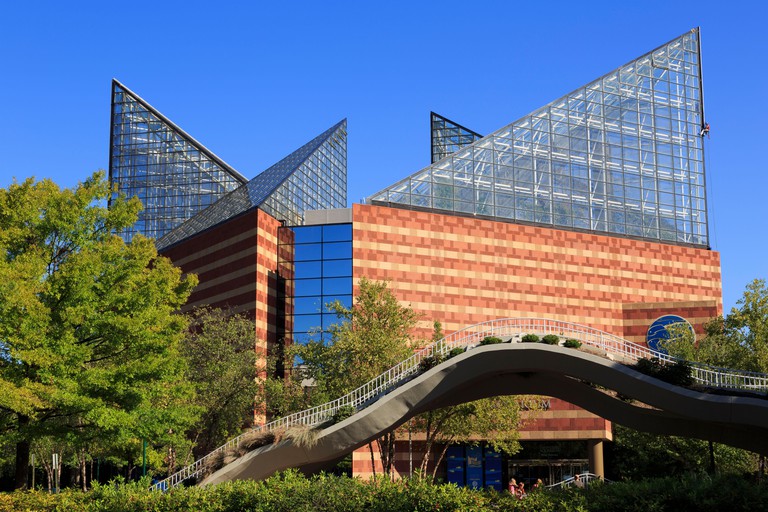 © Richard Cummins / Alamy Stock Photo
Book Now
This campsite is spread over more than 700 acres (280ha) of breathtaking Tennessee private forest; the perfect place to be spirited away from the cares of the modern world. Popular activities include rock climbing, hiking and mountain biking, or if you’d rather hop on an ATV, you can book a tour of this vast property with the camp keeper for a fee. If you fancy a cultural visit, nearby Chattanooga has the Tennessee Aquarium and a memorial to the Trail of Tears.
Give us feedback