© Corkythehornetfan/WikiCommons
Outside Nashville’s legendary Ryman Auditorium stands a sign that commemorates Bill Monroe‘s 1945 Grand Ole Opry performance. The sign reads “Birth of Bluegrass,” as it was this performance in Nashville — with Monroe and his Blue Grass Boys, joined by Earl Scruggs on banjo — that is regarded as the founding of bluegrass music. Today, there is little question that Nashville is the epicenter of bluegrass (the International Bluegrass Music Association is located here for a reason, after all), and there is certainly no shortage of opportunities to reap the benefits of the city’s still-thriving bluegrass scene. Whether you’re a resident or just in town for a night, here are five places to hear bluegrass music that will remind you why Nashville is known as “Music City.”

Music Venue
Singer Brennley Brown is just one of the names to have performed at Station Inn | © Jason Kempin / Getty Images
Open since 1974, The Station Inn is the place to hear bluegrass music in Nashville. Tucked away on 12th Avenue in the heart of Nashville’s Gulch neighborhood, The Station Inn is a small, weathered brick building that is easy to miss if you’re not looking for it (with the exception of its bright red door). However, its nondescript exterior belies its significance: since its founding, the venue has played a foundational role in the growth of bluegrass music in Nashville. Past performers include Jimmy Martin, Bobby Osborne, Alison Krauss, and Bill Monroe himself. Check out the venue’s calendar and catch a show, or head over to The Station Inn on a Sunday night to listen to free bluegrass music — every Sunday at 7:00 pm, the venue hosts a bluegrass jam that is free and open to the public. Aficionados of bluegrass music and first-time listeners alike will not be disappointed by their trip to this legendary music venue.
More Info
Open In Google Maps
402 12th Avenue South, Downtown, Nashville, Tennessee, 37203, USA
+16152553307
View menu
Visit website
Visit Facebook page
Send an Email
Give us feedback

Have you tired of the cover bands and dance music that flood out the doors of many of the bars that light up Broadway? Whether you’re already downtown or merely hoping to listen to some of the best country and bluegrass music performed live in Nashville, it is well worth your while to check out Layla’s Bluegrass Inn. Sandwiched between two honky tonk bars — The Second Fiddle and Robert’s Western World — Layla’s hosts both up-and-coming music acts and established artists (a list which over the years has included Chris Scruggs, grandson of Earl Scruggs, and legendary bluegrass artist Ralph Stanley). Layla’s never charges a cover fee, and before 6pm it is open to the under-21 set, too. 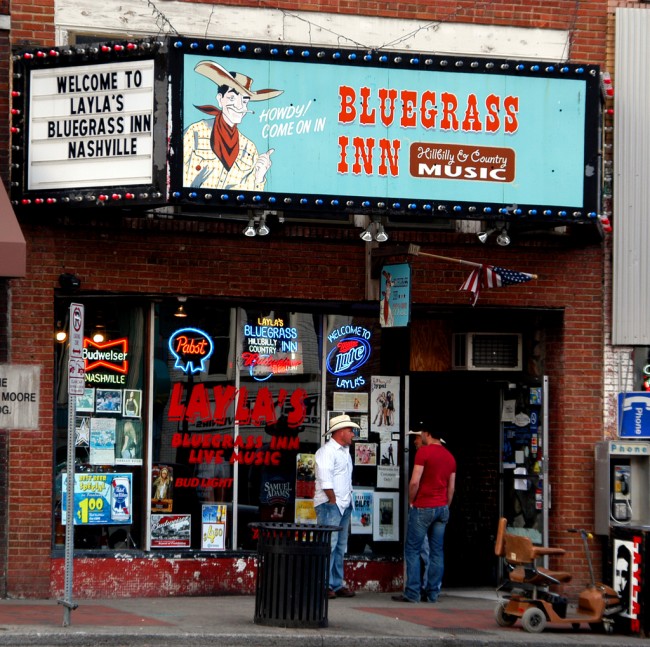 Park
A park might not be the venue that jumps to mind when you are considering opportunities to see live bluegrass music in Nashville. However, on Friday nights from May through October, Warner Parks hosts a once-monthly “Pickin’ Party” from 7 to 11pm. Bluegrass artists play in circles throughout the park grounds while three headlining acts perform on a main stage. Admission costs $20 for adults and $7 for children (children six and under get in for free), and the proceeds go towards protecting Warner Parks and funding educational programs. For a full list of dates and more detailed information, visit the Friends of Warner Parks website.
More Info
Open In Google Maps
50 Vaughn Road, Nashville, Tennessee, 37221, USA
+16153708053
View menu
Visit website
Visit Facebook page
Send an Email
Give us feedback

Bluegrass Nights at the Ryman

Concert Hall, Music Venue
What better place to see live bluegrass music than the very venue at which it was founded in 1945? Every summer since 1994, the “Mother Church of Country Music” has hosted a summer bluegrass series. The first show featured Bill Monroe, father of bluegrass music himself, and every year since then the Ryman has hosted an impressive roster of bluegrass performers. While this year’s series is over — the shows stretch for about a month between the end of June and the end of July — it is certainly worth your while to check out the Ryman’s website for more information and to keep this event on your radar for the upcoming year.
Looks like it's closed Hours or services may be impacted due to Covid-19
More Info
Open In Google Maps
116 5th Avenue North, Downtown, Nashville, Tennessee, 37219, USA
+16158893060
View menu
Visit website
Visit Facebook page
Send an Email
Give us feedback

Bar, American, Pub Grub, Wine, Beer, Cocktails
While Bobby’s Idle Hour may be located right in the midst of Music Row, it is a far cry from the tidy recording studios and record labels that surround it. In fact, Bobby’s is the quintessential dive bar: housed in a small building on 16th Avenue with a yellow-painted exterior and string lights winding around the inside walls, this bar is a favorite amongst locals. Be sure to check out Bobby’s calendar to catch a live performance (a bluegrass band generally plays every other Tuesday) or stop by for one of their Wednesday afternoon “Sam’s Jams” for up-and-coming singer/songwriters. Bobby’s website says it best: “Cold beer, cool country, and an eclectic mix of music and friends. If there’s no one on stage, grab the guitar off the wall and play an original.”
Looks like it's closed Hours or services may be impacted due to Covid-19
More Info
Open In Google Maps
1028 16th Avenue, Music Row, Nashville, Tennessee, 37212, USA
View menu
Visit website
Visit Facebook page
Send an Email
Give us feedback
Give us feedback