Things to See and Do in Oakland, Pittsburgh 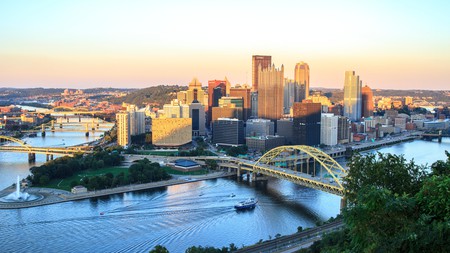 Home to the University of Pittsburgh and prestigious Carnegie Mellon, Oakland is one of the liveliest neighborhoods in Pittsburgh. It’s also where you’ll find the city’s popular museums and most beautiful architecture. Whether you prefer the Carnegie Museum of Art or Phipps Conservatory and Botanical Gardens, this neighbourhood is full of perfect weekend activities. Here’s our list of favourite things to do in Oakland. 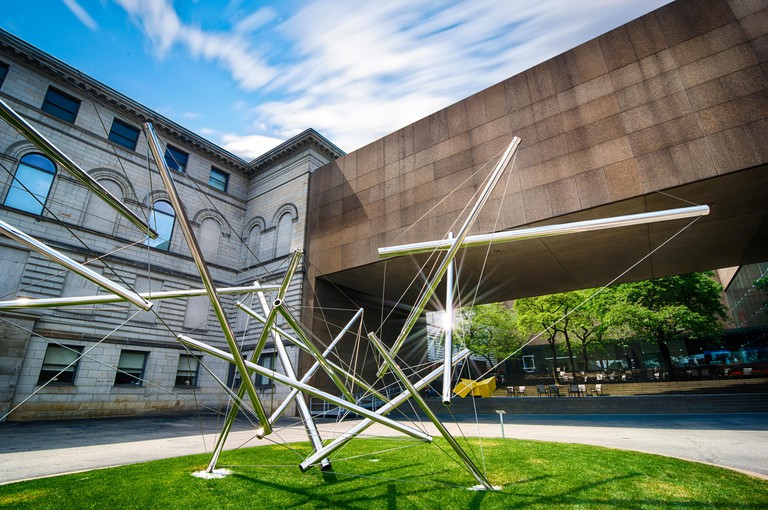 © Amy Cicconi / Alamy Stock Photo
Founded in 1896, the Carnegie Museum of Art is the oldest exhibition of contemporary art in North America, and foregrounds the works of many modern artists. The museum houses more than 32,000 objects including paintings, photos, sculptures, and architectural renderings. Throughout the year, multiple changing exhibits showcase various artists and styles, so each trip promises something new – or the chance to see old favorites.
Open In Google Maps
4400 Forbes Avenue, North Oakland, Pittsburgh, Pennsylvania, 15213, USA
+14126223131
Visit Website
Give us feedback

Museum
Facebook
Email
Twitter
Pinterest
Copy link
Share
Map View
Dedicated to the scientific exploration and public understanding of the natural world and human cultures, the Carnegie Museum of Natural History features many anthropological and biological wonders. A case in point is one of the world’s largest collections of Mesozoic Era dinosaur fossils, as well as some spectacular reconstructed Tyrannosaurus specimens. Surely one of the top five natural history museums in the United States, the Carnegie Museum of Natural History promises to be an exciting excursion for all ages.
Open In Google Maps
4400 Forbes Avenue, North Oakland, Pittsburgh, Pennsylvania, 15213, USA
+14126223131
Visit Website
Give us feedback

This gothic chamber full of stained glass windows casting colorful shadows can be found on the campus of the University of Pittsburgh, and celebrates the life of 19th-century composer Stephen Foster, sometimes called the ‘Father of American Music’. The small museum, envisaged as a shrine, takes about 30 minutes to tour, and features exhibitions about Foster’s life, including original copies of his work. Visitors can hear renditions of songs such as ‘Camptown Races’, ‘Oh, Susanna’, and ‘Beautiful Dreamer’ playing overhead as they peruse each section. An update on Foster’s family’s links to slavery, and the offence caused by some of his songs is a timely addition. 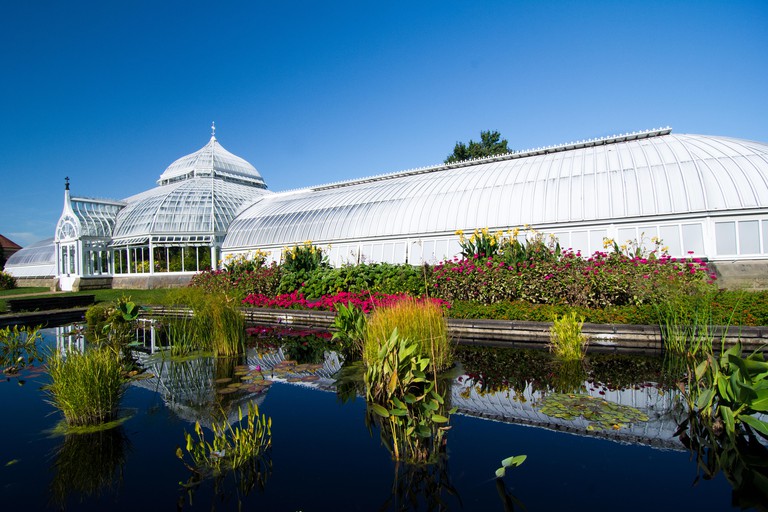 © Amy Cicconi / Alamy Stock Photo
In Schenley Park, the Phipps Conservatory and Botanical Gardens is the perfect spot to admire all the greenery of Oakland and beyond. The gardens feature a series of changing exhibits, highlighting different regions and species of plants, in addition to its vibrant permanent collection. A self-guided tour takes around 90 minutes, making this a perfect outdoor visit between museum trips. Come on Wednesdays when the conservatory hosts a farmers market, with plenty of delicious produce to sample from local farms.
Open In Google Maps
1 Schenley Drive, Central Oakland, Pittsburgh, Pennsylvania, 15213, USA
+14126226914
Visit Website
Give us feedback

Building, Memorial, Museum
Facebook
Email
Twitter
Pinterest
Copy link
Share
Map View
Designed by architect Henry Hornbostel, and founded in 1910, the Soldiers and Sailors Memorial Hall and Museum showcases various artifacts relating to the United States military. The mission of the museum is to tell the stories of personnel who have served the country during war and peacetime, and share their experiences with the public. Several exhibits represent the diverse forces, with fascinating pieces of old equipment, mementos and uniforms.
Open In Google Maps
4141 Fifth Avenue, North Oakland, Pittsburgh, Pennsylvania, 15213, USA
+14126214253
Visit Website
Give us feedback

It might not look like much from the outside, but this shabby Mexican takeout joint serves some of the best tacos and fajitas in Pittsburgh. Just outside Schenley Park in the heart of South Oakland, Las Palmas offers a basically unlimited choice of fillings and sauces (mild to seriously spicy) with which to customise your meal, all at student-friendly prices. If you really love Mexican cuisine and want a memento, pop into the specialist supermarket right behind the stand for all things south-of-the-border. 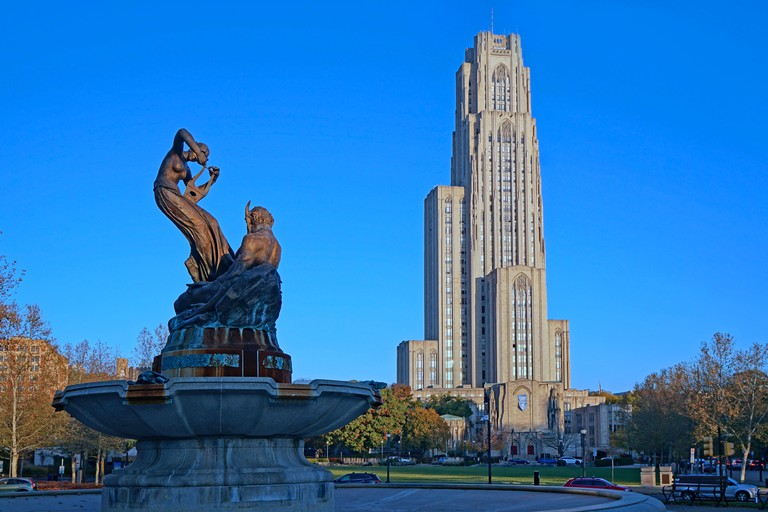 The centerpiece of the University of Pittsburgh, the Cathedral of Learning is open to the public for tours of its intricately decorated rooms and staircases. The Gothic Revival skyscraper was dedicated in 1937, and represents the pioneering spirit of Pittsburgh’s education system. 2,000 rooms over 42 floors host students for classes and events, and the featured Nationality Rooms are well worth a visit, representing a variety of countries through furniture and decor.

The second largest park in Pittsburgh, Schenley Park is the best place to get away from the bustling crowds and noise of the city. Bike, jog, or stroll along the paved trails that wind through the expansive greenery, or bring children to enjoy its many playgrounds. There are also several tennis courts and a soccer field in addition to the year-round skate rink where anyone can spend an enjoyable afternoon with friends.

A large theatre complex with three auditoria housing multiple simultaneous performances, the Pittsburgh Playhouse is the home of one professional troupe and three student companies. The playhouse programmes more than 18 productions each year, and with a diverse range of avant-garde and popular offerings, there’s something to suit every taste. 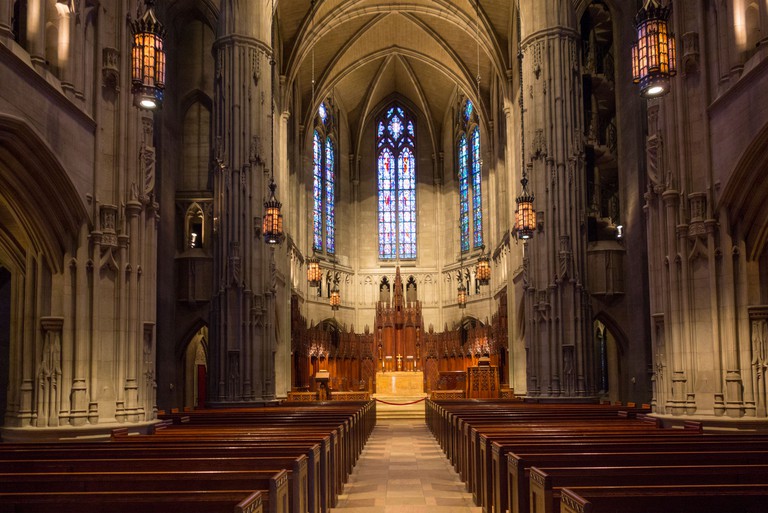 Inaugurated in 1938, the Heinz Memorial Chapel is a nondenominational church right next to the Cathedral of Learning on the campus of the University of Pittsburgh. Designed in the neo-Gothic style by the same architect, Charles Klauder, as a companion to the grand cathedral next door, the chapel hosts numerous tours throughout the day. This is a great pit stop for architecture buffs or lovers of old churches to admire the detailed decor and beautifully crafted interior.

Don’t leave Pittsburgh without taking a stroll over the formidable Hot Metal Bridge, which crosses the Monongahela river between the South Oakland and South Side Flats neighbourhoods. Built at the very start of the twentieth century, the bridge formerly connected two plants of the J&L steel mill, and was used to transport molten steel between furnaces. Cycling and pedestrian lanes were added in 2007, making it the ideal spot to watch the sun set over Pittsburgh.

The Fence of Carnegie Mellon University

Going to look at a fence might not sound like the most exciting thing to do, but this one’s an exception. Listed in the Guinness World Records as the ‘most painted object in the world’ this colorful structure can be found opposite Doherty Hall, on the Carnegie Mellon University’s campus. The original fence built by students in 1923 was used as a billboard by all and sundry, before collapsing under the weight of its own decoration in 1993. The concrete structure built to replace it has already been covered by four inches of paint, as students race to create a new world record. 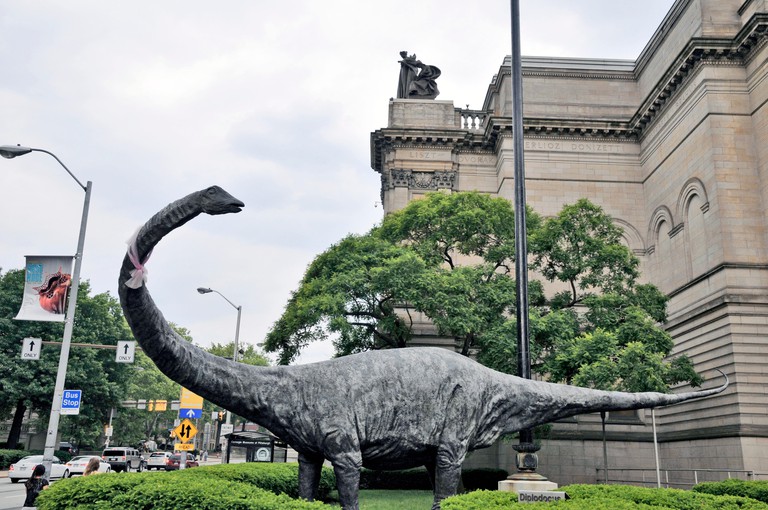 © Naum Chayer / Alamy Stock Photo
Dippy the Dinosaur lives outside the Carnegie Museum of Natural History and even has his own Twitter account. Since 1999 the diplodocus skeleton has been delighting fans from all over the world. Discovered in 1898 and unveiled to an awestruck public in 1905, Andrew Carnegie subsequently donated plaster casts of the original skeleton to museums all over the world, making Dippy the most celebrated and admired dinosaur on the planet. Be sure to pass by and say hello.
Open In Google Maps
4400 Forbes Avenue, North Oakland, Pittsburgh, Pennsylvania, 15213, USA
+14126223131
Visit Website
Give us feedback

Throughout the 19th and 20th centuries, Pittsburgh’s coal and steel factories caused so much pollution that it was branded ‘The Smoky City’. Following World War II a huge cleanup operation commenced, and the black soot encasing many buildings was painstakingly scrubbed off. The Mellon Institute for Industrial Research, however, decided to leave part of its grand structure unpolished, as a reminder of the effects of poor air quality. If you peer behind some of the building’s pristine columns, you’ll find remnants of how the city used to look – and be grateful for the change.

Bar, Pub Grub
Facebook
Email
Twitter
Pinterest
Copy link
Share
Map View
Boasting a prime location on Forbes Avenue, just north of Schenley Park, Hemingway’s Cafe is the most popular student bar in the city. With more than 40 varieties on tap, it’s the perfect place to try a new beer, or grab a great-value bite to eat (we recommend the generously sized burgers, buffalo wings, and irresistible pulled pork fries). Weekly events include DJs, quiz and open mic nights. Hemingway’s is repeatedly named one of the best college bars in the USA by various media know-alls, and true to its name, it’s a great place to drink.
Open In Google Maps
3911 Forbes Avenue, North Oakland, Pittsburgh, Pennsylvania, 15213, USA
+14126214100
Visit Website
Give us feedback