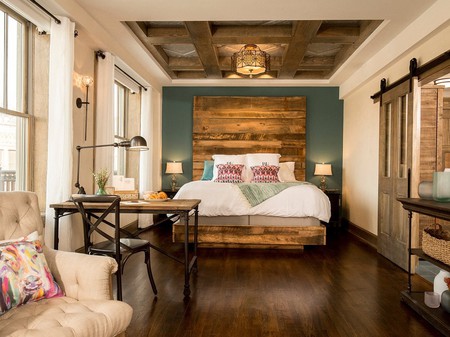 The Food Network’s Pioneer Woman, Ree Drummond, may be “plowing through life in the country…one calf nut at a time,” but her latest venture, an eight room hotel in Oklahoma, might just be the crowning jewel of her country-centric empire.

Officially opening on April 13th in Pawhuska, Oklahoma—about 56 miles outside of Tulsa—Drummond’s inn, The Boarding House, created a social media frenzy after its existence was announced last year. Described on the official site as “cowboy luxury,” the hotel features eight distinct rooms ranging from “The Ranch Room,” designed in the same country-chic decor as the Drummond family home to the “The Butterfly Room,” decked out in understated floral prints and a bold paisley bathroom with a clawfoot bathtub.

(I guess I apparently like green or something? 😂) The Boarding House is just about ready for guests! Reservations will open up sometime next week, right after I decide whether or not I'm going to move into this bathroom for the rest of my life. Ladd can have the bathtub, I'll sleep in the shower! It could work…

Starting at $149 a night, each room comes with morning coffee, served just the way you like it, turndown service, and a full country room service menu that means guests can chow down on biscuits and gravy or a chicken fried steak without ever having to leave bed. Don’t expect to indulge in a Pawhuska vacation too soon, though, because rooms sold out for the first six months in under 30 minutes of the booking sites’ launch. But if you’re willing to wait to visit Drummond’s quaint hometown, bookings after March 31, 2019 (yes 2019) will be available in the near future.

Had a rare breakfast date with Ladd this morning at our restaurant. I had Migas (with guac, sour cream, Pico de Gallo, and breakfast potatoes, 😍) and a biscuit w/ jam, which was so totally unnecessary but delightfully so. Ha. Meanwhile, Ladd had the pancake breakfast and I swiped a bite. Okay, two bites. It was fun being at @pwmercantile with the breakfast crowd, and I got to have some quality time with my cowboy. And okay, it was three bites. 🥞

It makes sense, though, that folks would flock to stay at The Boarding House when evaluating The Mercantile, Drummond’s other Pawhuska venture. Serving over 6,000 customers a day—in a town of only 3,500—The Mercantile is a restaurant and bakery where fans from around the world wait, sometimes up to three hours, for a taste of something “from Ree’s Kitchen.” Also serving as a coffee shop, deli, and general store, it’s probably the only place in the world, or at least in Oklahoma, where you can come for the beef tenderloin Benedict and leave with ceramic ice cream cones, a seven-piece slotted screwdriver set, a whoopee cushion, and a “spicy cowgirl,” an iced coffee infused with cayenne, chocolate, and vanilla cream.

Who knows what The Pioneer Woman host and her family will dream up next. Hopefully, a country themed waterpark complete with a gravy filled lazy river. Until then, we’ll keep refreshing her site, waiting for more rooms to open at The Boarding House and perfecting Drummond’s ever easy 16-minute meals.