Why This Cleveland Statue Is Crying 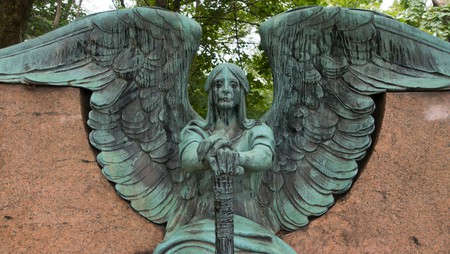 The Haserot Angel, in Lake View Cemetery, Cleveland, Ohio, looks as if he is crying | © Randy Duchaine / Alamy Stock Photo

If you have an affinity for art that hedges on the darker side, you’ll want to make a pilgrimage to visit the Haserot Angel. This iconic gravestone sculpture of the angel of death appears to be weeping real black tears.

In Cleveland’s University Circle neighborhood, there’s a cemetery that serves more as an outdoor art gallery than anything: Lake View Cemetery, home to over 100,000 graves of both notable and lesser-known Clevelanders. Known for its elaborate sculptures and immaculate landscaping, Lake View Cemetery is frequented by historians and artists as well as photographers and lovers of everything haunted and macabre.

The cemetery’s centerpiece is inarguably a grim, green grave marker that casts a striking silhouette. Seated regally upon his deathly throne, the angel holds an upside-down torch, representing the flame of life that has “gone out.” Colloquially, the sculpture is known as the Haserot Angel or the Weeping Angel, but its actual name is The Angel of Death Victorious.

Most hauntingly of all is that the angel actually appears to be crying, weeping dark tears that pour liberally down his cloak even as he declares a hollow victory over life. Many haunting explanations have been offered for the angel’s tears, with some visitors reporting having seen the angel move or cry as they stood.

But the real explanation is much more practical. The angel was cast from bronze, and over the years, discoloration and condensation have taken their toll, resulting in black stains or “tears.”

The Haserot Angel marks the marble gravesite of Francis Haserot, a member of the legendary Haserot family. The Haserots founded a highly successful canned goods business in the late 19th century that continues to distribute high-quality canned foods across Ohio and Michigan.

The Angel of Death Victorious was built for the Haserot family by Herman Matzen, a sculptor from Detroit, MI, who studied art in Europe before settling in Cleveland for the remainder of his life, in 1924. The sculptor died in 1938 and was buried in the same cemetery that houses his famous, eerie sculpture.

Today, photographers, sculptors, and lovers of Gothic art, culture, and history flock to the cemetery specifically to visit the Haserot Angel in all its grotesque glory.

If you want to visit, the angel is close to the Mark Hanna Mausoleum at Lake View Cemetery, and you can find a map at the cemetery’s office or gate, as well as the Garfield Monument.