The Newest Contemporary Artists On The Block

There are those who are sticklers for traditional art, but we are believers of opening the mind to emerging artists that are cutting a new scene in the art world. Blow off the cobwebs, and let us introduce you to the newest, talented kids on the block, courtesy of feisty female art dealer and gallerist Marine Tanguy. 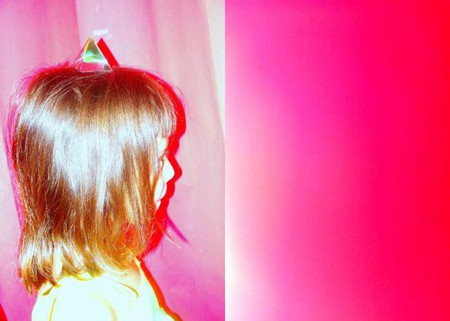 Jennifer Abesseria was bedroom-bound for three months without moving after a terrible accident. During that time, she spent hours downloading internet images and while doing so, confronted the conflicts of our virtual reality – its lack of coherence and continuous contradictions. From there came Jennifer’s decision to recreate this tension with pictures shot on an iPod and presented via Instagram. For Jennifer, carrying a camera around feels ‘fake‘. Theinstant method allows her to produce from daily life and with no studio comes a spontaneous approach towards the medium of image making.

This photographic artist makes no qualms about her definition of artistry: ‘Being an artist is more a state of mind than something you chose to become,’ and holds no boundaries between life and art, wishing to ‘pass on a specific mood in a specific moment.’ Her nonchalant attitude to evolving contemporary art sees Jennifer living in her own bubble: ‘I spend 70 per cent of time hunting images on the web versus 30 per cent finding images in old art books.’

Jennifer’s most notable exhibit to date is her first featured works We Live As We Dream – Alone. 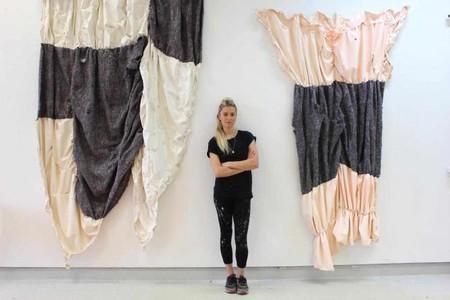 Scarlett Bowman is an artist forming her work predominantly on the history of mediums and holds the desire to re-engage society with craft and our own wastes, wishing to ‘face the real reality’ far from the glitz and superficialness. Scarlett’s acquired technique of casting jesmonite is challenging and innovative. Her current body of work forms two narratives: industry versus craft and handmade versus ready-made. In order for Scarlett to prevail, she sources her materials — latex, recycled wool, construction safety — from all over to juxtapose a form of hybrid.

Work ideas never pose a problem; Scarlett finds London full of inspiration. ‘I am drawn to the fabrics in our every day life that go unnoticed, from train and bus seat material to old fish nets down by the banks of the Thames.’

Her ambitious streak is kept ablaze by referring to the words of Sol Lewitt in a letter to Eva Hesse written in 1965: ‘try the most outrageous thing you can – shock yourself. You have at your power the ability to do anything.’ Scarlett does not get distracted by the art market as a whole and focuses on one’s own work. ‘What is in fashion now, will be gone soon enough.’ 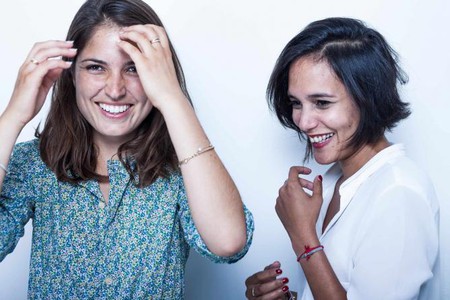 Parisian Alison Bignon has resurrected the old-fashioned medium of print-making; she has mastered the technique and excelled the art of engraving and mixing South Korean inks (richer and denser than Western inks) on small copper plates whilst becoming the first artist to make abstract emotional portraits.

Alison’s direct approach to her subjects is fascinating, and her emotional process of listening to their stories begins by approaching a stranger — a person who catches her attention. ‘A surprising number of people call. Following an initial interview, I will spend some days alone in my studio translating their story into a detailed work on paper. My work is predominantly rooted in classical engraving, but I hand-finish my works with watercolour, pencil and pen-and-ink.’

After her first show at De Re Gallery in West Hollywood last December, Alison’s priority is to exhibit work outside Paris. ‘Location is one of the most important factors when choosing to take part in a show.’ She relishes in the contemporary art scene becoming more and more international as artists need a global platform to showcase. ‘In the next few months I’ll be exhibiting in LA, working in London on a residency and travelling to Nigeria and later Bangladesh.’ 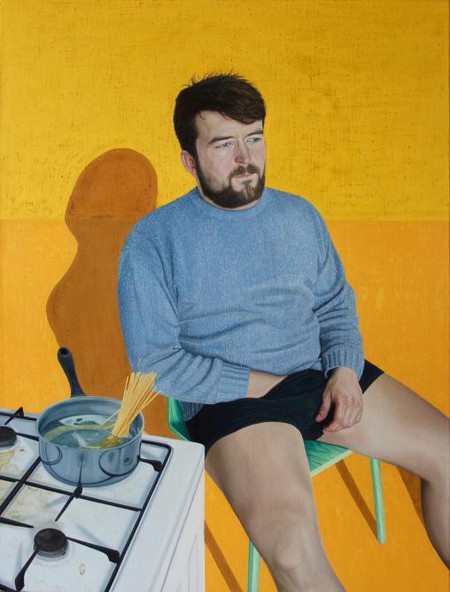 Tristan Pigott is an extremely skilled oil painter that perfects each of his paintings for 12 hours per day over a course of two to three months, without any days off. His riveting brain delivers work with intelligent references and psychological tensions. He is centred in knowing that not all projects work out but result in the most exciting elements of the work. Currently, Tristan is working on a painting of a friend, doing a finger painting of himself. ‘The aim is to make fun of myself as someone who paints in a time where there is a society full of people who take hundreds of selfies.’

Tristan is always interested in seeing work that’s going on around him yet doesn’t find it instrumental to analyse. A mix of patience and impatience motivates Tristan to make his work ambitious. Tristan’s most prolific works include painting at the Royal Academy Summer show and winning the National Portrait Gallery BP award at the age of 24.

Tristan wishes to partner with artists or gallerists who are ‘honest and have a critical eye. Space is important and a desire to experiment; there’s a lot more you can do than frame and hang a painting.’ 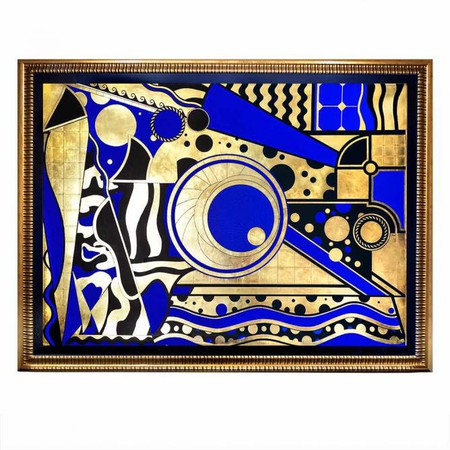 Lina Viktor grew up in London until New York became her ‘training ground.’ Lina’s strong contemporary art voice heralds over several creative mediums: paintings, self-portraits, performance in nature and films. From a young age, Lina walked a line between thinking creatively and analytically — the counterbalance has now allowed her to merge disciplines and become the artist she is today.

The consistent material used throughout Lina’s work is gold; 24-karat gold employs a modernized version of what the ancient technique of water gliding is. ‘All of the materials I use, the visual motifs and language explored, along with the process, is aligned with a conceptual intent and thought.’

With a new chapter of Lina’s life comes natural changes in her work. She believes ‘taking time to simply reflect is as important as the active periods,’ and further expresses her viewpoint on the art scene: ‘the scene is exactly that – a scene – transient, ever changing. There is always someone or something new that is apparently important until it’s not – these are all just distractions.’ 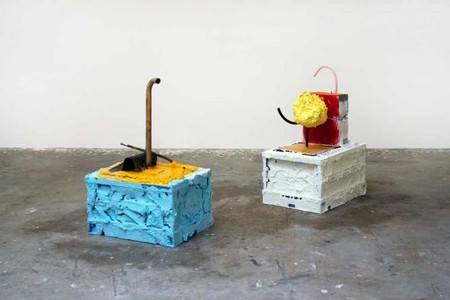 Jean-François Le Minh found freedom of expression from studying the fine arts. Jean-François happily gets lost in tool factories where he removes their practicality and gives them an artistic voice. Jean-François’ paintings and sculptures are rich in texture with powerful layers that feel united — almost giving them a real-life quality.

He holds concern for what painting and sculpture might be in our current society; thus, he has chosen to start developing his own language composed of traces, marks and interventions on the surface of the canvas. Through his recent works, he has pushed the boundaries of what constitutes painting and what compromises art.

When teaming with fellow artists, Jean-François feels the first point of contact is the most important, ‘the degree of professionalism is key in a partnership.’ To keep his artistic vision strong, he observes the world around him as a daily activity and from close inspection, works on an idea that might be used in the studio, but most of the time ends up on paper or as a sketch. 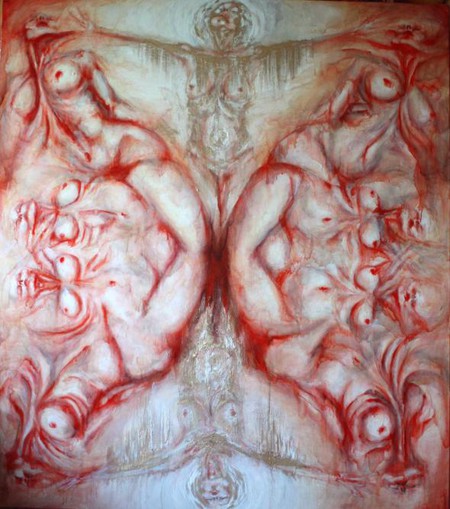 Ewa Wilczynski’s studio radiates the strong emotion cited in her paintings, as she captures the deepest human psychological pains. Her meaningful works bare seven fine layers showing a precise understanding of her technique. Ewa believes studying the past provides inspiration for the future. ‘All the best ideas come from history, and it’s quite shocking that in the culture of the human race more things are forgotten than remembered.’ Drawing inspiration from philosophy, history and religion, Ewa paints how she feels and has a deep obsession in making her work unique with alchemy of painting.

Ewa loves nothing more than walking around a gallery and soaking up its awe-inspiring architecture. The digital world has allowed our cultural awareness and diversity in the arts to globally accelerate, and Ewa believes it’s a privilege to be able to see artists from other countries work. 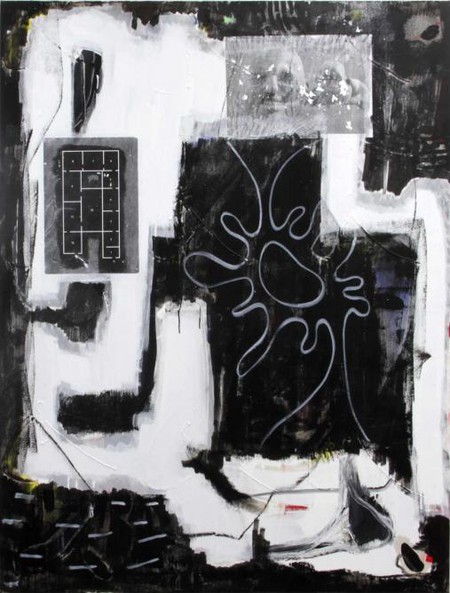 Asger Harbou Gjerdevik‘s Scandinavian upbringing inspires and connects his work. ‘The violence and drama of Norwegian mountains and fjords, mixed with the cold winters and long Summer nights is something that I love and feel very drawn to.’

Asger uses photo transfer as a way to add depth to the canvas, which challenges a two-dimensional surface. His control of oil is mesmerizing and would remind us of Willem de Kooning — the artist he most admires. Each brush stroke is free and powerful, while the photo transfer aspect unveils a glimpse of a narrative in which the onlooker can get lost. The process, followed by Asger, is an ‘act of doing’ with new ideas emerging throughout ‘as that’s what working with art is.’

The Danish Embassy was his first solo presentation, while more recently, he was part of a group display in Copenhagen and a collaborative creative project with the Slade School of Art.

Clashes of buildings, societies, culture and people are what intrigues Asger the most about London. ‘The complexity is something that I draw a lot of inspiration from.’ Asger believes there is too much emphasis placed on money and hype relating to art, ‘we should fix our eyes on the actual art rather than the person/s doing it.’ 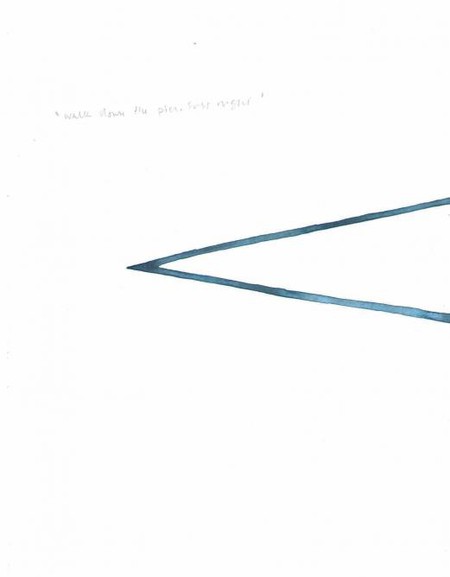 Walk down the pier. First night by Ayesha Sultana

Bangladeshi artist Ayesha Sultana is interested in the poetics of space and relationship between material and process through sound, drawing, object, painting and photography. She is constantly negotiating with her environment, which is reflected throughout her work. She takes the most mundane aspects of life and spins them to generate ideas. ‘My work process is often intuitive and unstructured; other times disciplined and self-regulated.’

‘Time plays a key role in making.’ Depending on the nature of her work, the medium or the process involved determines the length from beginning to end.

In January this year, Ayesha participated in 1 Mile Dhaka — a day-long exhibition by Britto Arts Trust — where she intervened with Rupture in a public space. This provoked Ayesha to look at her work in new ways and in a particular environment. Ayesha thrives on travelling and ‘being in a state of flux impacts her work.’

She is currently in the preliminary stages of an inquiry and experimentation process for her upcoming solo exhibition at the Dhaka Art Summit (2016). Experimenting with new material and working across media keeps the process of creativity innovative, while the therapeutic nature of consistently making motivates her even in moments of self-doubt.