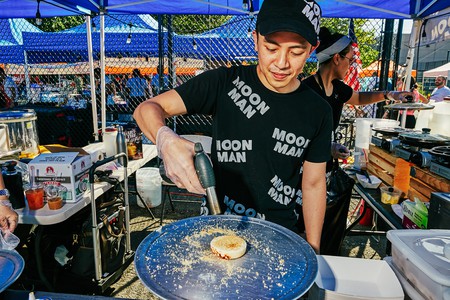 At the Queens Night Market, dishes are no more than $6 | © Laura Murray / Culture Trip

Take a ride on the 7 train to the Queens Night Market, a Saturday-night, seasonal, outdoor market located in the parking lot behind the New York Hall of Science in Corona, Queens. Use this guide to eat well, and cheaply, while you navigate the dozens of vendors.

Kicking off its fifth summer, the Queens Night Market is unlike the other markets strung across New York City. It doesn’t sell produce or Instagram viral sensations; instead, it’s modeled after the famed night markets of Asia, replete with small, local businesses and mom-and-pop shops looking to introduce their cuisine to New York City. Over 60 vendors have popped up this year, squeezed under tents, peddling fare from Iran, China, Venezuela, South Africa, Indonesia and Malaysia, all for a max of $6 per item (but most items are no more than $5). 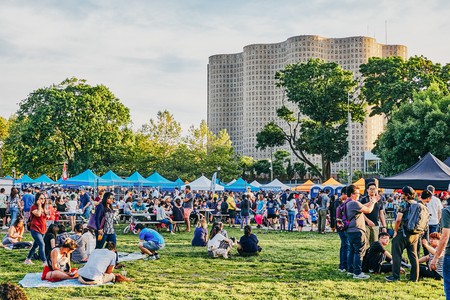 Just hop on the 7 train and get off at 111th Street and you’ll be welcomed into a different world, one strewn with crispy rice ladled under hunks of beef, arepas bursting with cheese, and pie-crust cookies topped with streusel. All you need is a Metrocard, one $20 bill and a rumbling stomach.

New York City is not rife with Burmese food. Several years ago, thanks to Queens resident Myo Lin Thway, you could find delicate, paper-thin flatbread at his church in Queens or hawked at street fairs throughout the city. It was a rare occurrence, until Thway popped up at the Queens Night Market, framed by a grill and rounds of dough under his Burmese Bites sign. 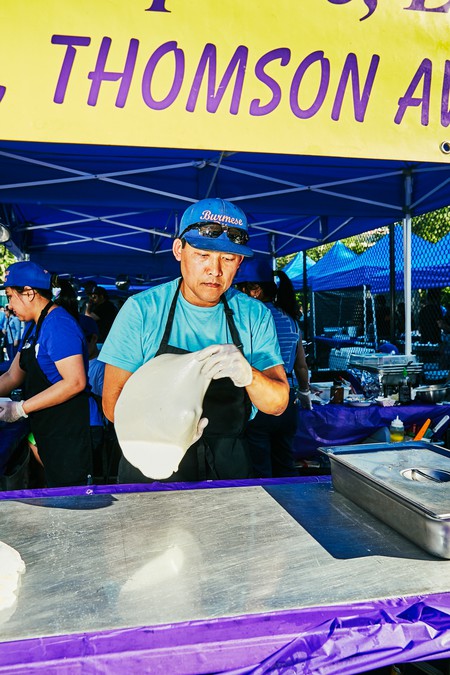 Dough is stretched until thin, then tossed onto a hot grill | © Laura Murray / Culture Trip

On Saturday nights, guests stand in long lines waiting to sample Thway’s famed palata. He learned how to make this Burmese flatbread in his hometown in Myanmar and has since introduced it to the Queens Night Market community. Thway mixes wheat flour with water, salt and a touch of sugar, then he stretches the dough out into long, pliant ribbons until it’s flat and almost translucent. The dough is thrown on the grill and cooked until golden brown and flaky. Sometimes it is served plain, flanked by a pot of red chicken curry for dipping; other times it comes with bits of chicken hidden inside, paired with a green chicken and potato curry sauce. 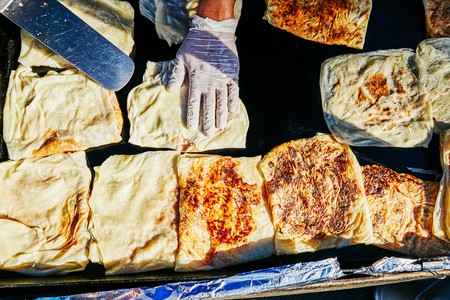 The flatbread is charred until crisped up and browned, folded with bits of chicken or simply served as is | © Laura Murray / Culture Trip

It’s hard to find Burmese food elsewhere, but at the Queens Night Market it’s become a staple and one of the most popular destinations. “People don’t know about [Burmese food] because there aren’t people who introduce the food to the public,” Thway explains. “I just happen to be one of the very few people. I’m proud of that.” 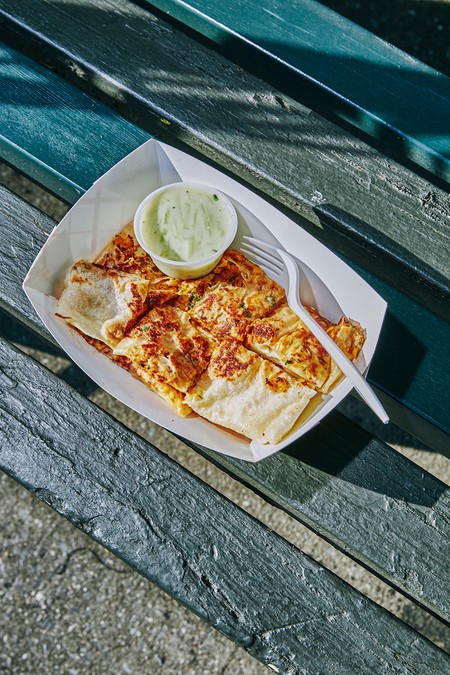 At ChefBoyarNetty’s stall, cupcakes are not what they seem. Founder Lynette Thompson dishes up her Soul Food Sunday Cupcake, a savory riff on the handheld sweet, jammed with mac and cheese, cornbread, mashed potatoes and a chicken wing. 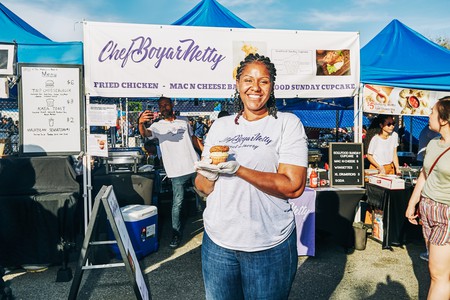 “[Soul food] is underrepresented in many spaces,” Thompson says. “A lot of people can’t get what I’m offering at home or in their neighborhood.”

Thompson is used to experimenting with food and had stumbled across a stacked cupcake online – but didn’t think it was actually possible to make. So she worked on a version that would hold together. In her iteration, she seasons and brines the chicken wings in buttermilk overnight. The next day, she infuses her cornbread batter with honey, stuffing mac and cheese inside before it’s baked. The springy surfaces of the cornbread cupcake are gently piped with garlic-parmesan mashed potatoes – the same way you’d pipe icing – then crowned with a chicken wing. It’s all the beloved soul-food dishes in one small, palmable rendition. 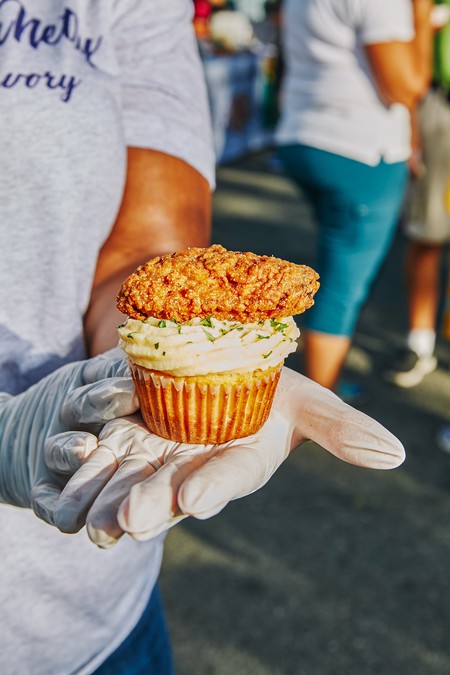 When it comes to actually eating the Soul Food Sunday Cupcake, Thompson recommends first gnawing at the chicken wing, then biting into the cornbread. 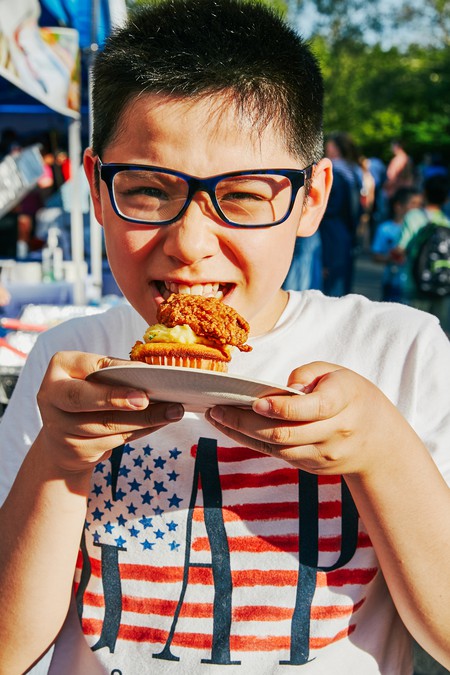 Thompson hopes new customers will finally have an opportunity to try soul food. “A lot of customers are of Asian descent, so my cuisine might be something new for them,” she says. “Or someone might see my cuisine and be attracted to try mine and then try some of the other cuisines that they’ve not had; that’s the experience I have at the night market.”

Nigel Sielegar and Wenny Purnomo have always considered Indonesian food to be an integral part of their lives. The two cousins grew up in Indonesia, undeniably obsessed with kue pancong (coconut pancakes), an adored but vanishing street food. 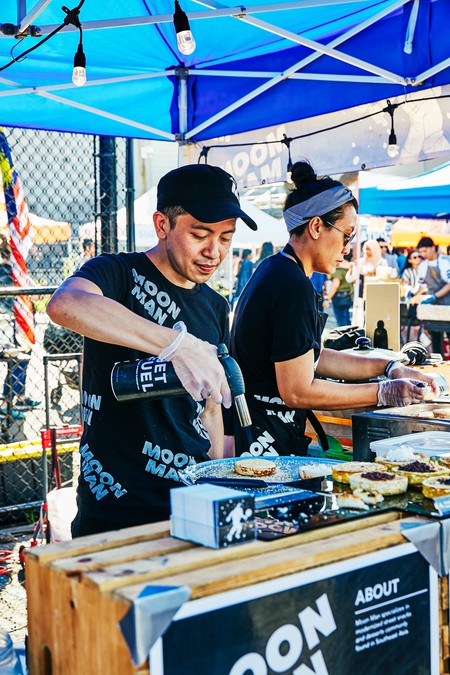 “We have a mission,” Sielegar says of Moon Man, the Indonesian street-food company he created with Purnomo. “Number one is to introduce this kind of food to New York City; the other is preserving the culture of Indonesia street desserts that is getting harder to find in Indonesia.” 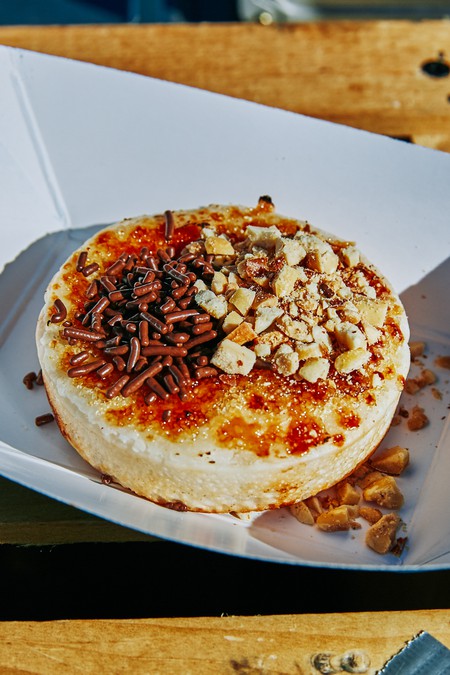 Each pancake is sprinkled with a host of toppings, like chocolate sprinkles and peanuts | © Laura Murray / Culture Trip

Moon Man whips up kue pancong: squat, squishy disks formed out of coconut, coconut milk and rice flour. The pancakes are cooked in a cast-iron griddle until strewn with golden-brown polka dots, then they’re served warm with a showering of toppings: crumbled peanuts, chocolate sprinkles and shards of coconut. Those in the know opt for the most popular topping: a mountain of java palm sugar, which is subsequently torched, causing the sugar to melt and caramelize. It’s finished off with a pile of shaved coconut boat. One kue pancong is $4, or you can get three for $10. 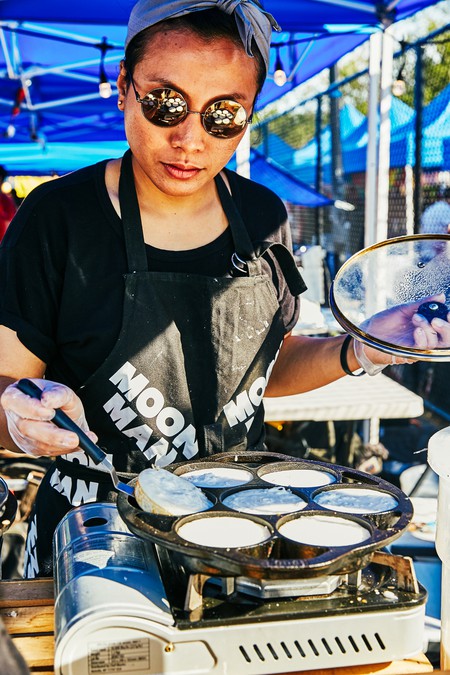 Although many people arrive at Moon Man unfamiliar with Indonesian street food, they walk away with a formal education, thanks to the knowledgeable staff. Sielegar is happy to help; after all, the dish is getting more difficult to find, and Moon Man is on a quest to both preserve and spotlight the snack.

“The Queens Night Market is about introducing people to different cultures,” he explains. “That’s why a lot of the vendors are mom-and-pop operations, small ones like ours.”

Friends Carlos Hon, Abraham Chin and Calvin Leong never expected to share their passion for Malaysian food. Sure, they all loved to cook, dreaming up dishes for friends and family, but it wasn’t until the friends were together in New York City that they decided to capitalize on something they had long discussed: The Malaysian Project. 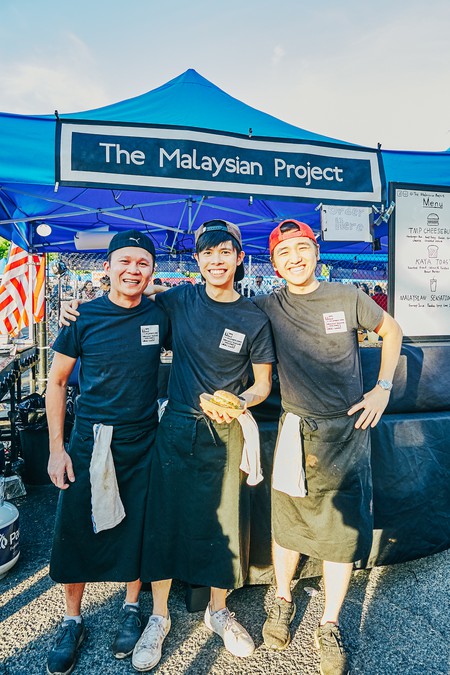 The Malaysian Project showcases the kind of Malaysian food the three founders grew up eating. “Being able to serve the food from back home is a very humbling experience,” Leong says. 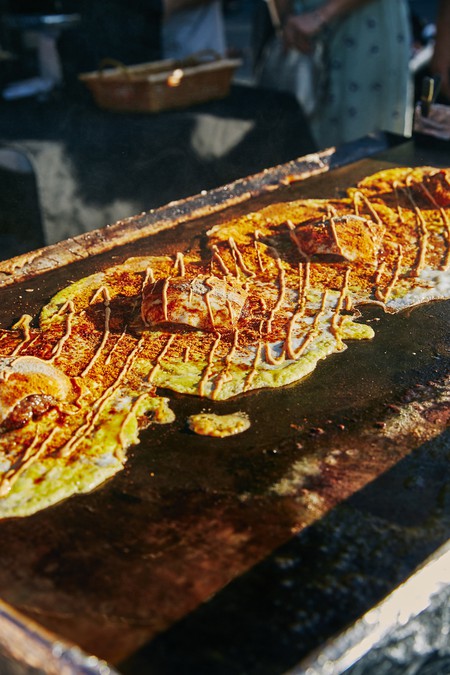 At the Queens Night Market, The Malaysian Project is beloved for its burger, a beef patty slipped inside a fried egg, like a package into an envelope. A cook first sears the burger – laced with cumin, paprika, cayenne pepper, chili powder, coriander, garlic and onion powder – then cracks and spreads out an egg, a confluence of white and yellow speckled across a sea of black. The burger is wrapped inside the egg, the long sheets of egg folded around it until the meat disappears, and slathered with spicy mayonnaise and a tangle of shredded lettuce under a plush bun. 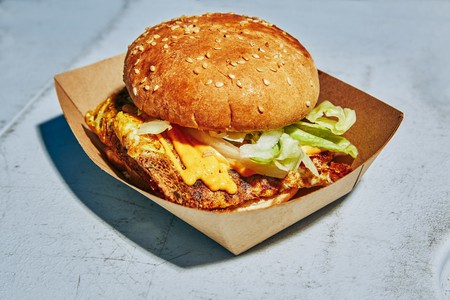 The burger is $6 – but that’s the most expensive price you’ll find at the market. “The Queens Night Market is very special from other markets because they have a price cap that allows customers to try all vendors,” Chin says. It can often be a bit difficult to remain profitable when tasked with a low cap, but The Malaysian Project founders agree that it’s certainly worth the challenge.

“It’s a great honor to serve people who enjoy food and who would like to explore a kind of food they haven’t experienced before,” Hon says. “It’s not just serving food; it’s about the people who try something new.” 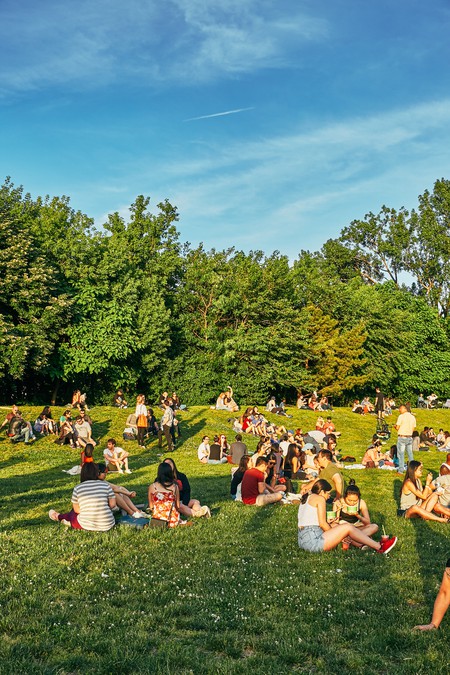