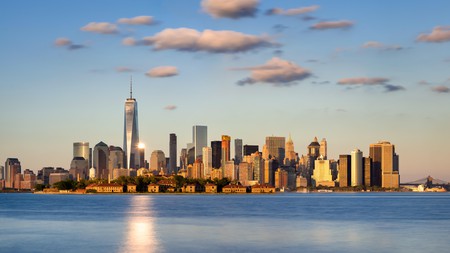 Boasting a lively environment and plenty of quirks, hostels in New York have a lot in common with the city itself. Our favorite hostels in New York City offer amenities only likely to be found here, such as a staff fluent in several languages and perks including hostel-organized pub crawls and free itinerary planning.

Everyone wants a bite of the Big Apple – the neck-craning skyscrapers, the iconic monuments, the amazing food. If you’re not careful though, the Big Apple can end up taking a seriously big bite out of your bank account. Thankfully, budget-conscious travelers can save their precious dollar bills by bedding down at a laid-back hostel rather than a swanky hotel. With prime locations, top facilities and both shared dorms and private rooms to choose from, they’re a safe bet for an easy and comfortable stay. Here’s our pick of New York hostels for your next stay, and they’re all bookable with Culture Trip. 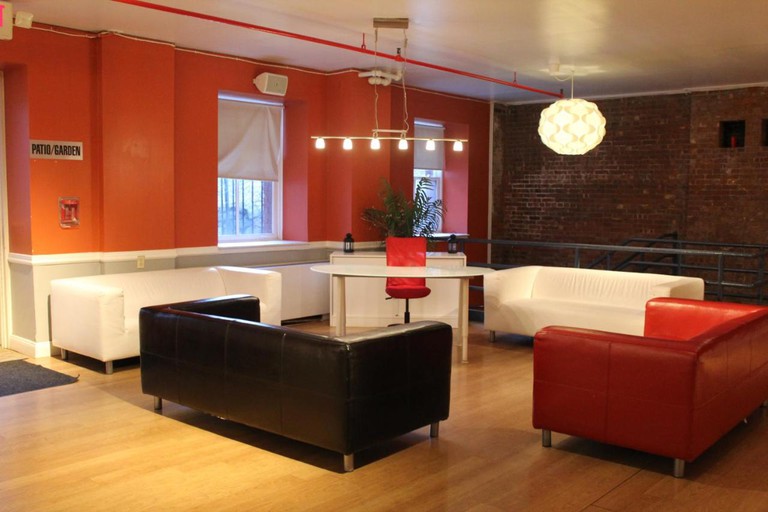 At HI New York City (short for Hostelling International), the numbers speak for themselves. More than 1,840 travelers have recommended this Upper West Side hostel, capable of hosting 672 guests just two blocks from Central Park. Amenities at this cheap hostel in New York are equally staggering and include the largest private green space in Manhattan, a kitchen featuring a whopping 36 burners, plus rare features like an on-site laundry room and full-service café. HI NYC clearly knows what it’s doing, so you should take advantage of the hostel’s free itinerary planning to guarantee a great trip. 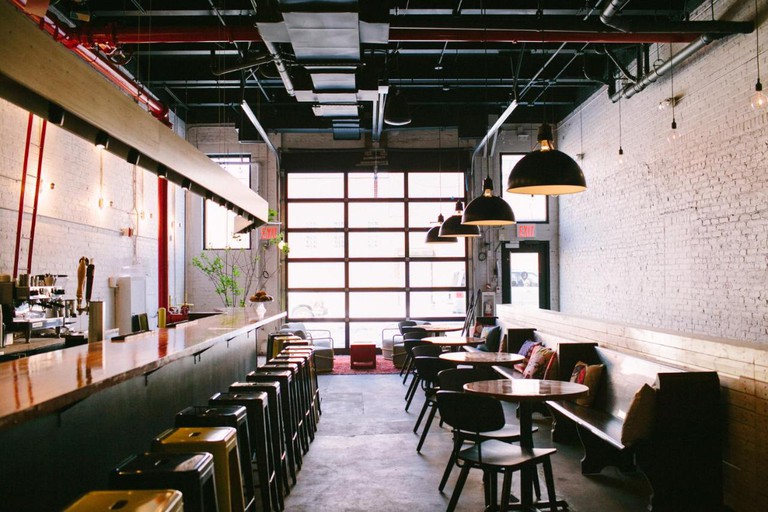 Courtesy of The Local NY / Booking.com

The Local bills itself as a guest’s best friend and, with double and dorm-style rooms to choose from, it’s hard to argue. Befitting such a relationship is hospitality in the form of a fully stocked bar, an all-day café and access to this New York City hostel’s rooftop and laundry room. Double rooms would rival those at any hotel in the city, with Crittall windows, glossy tiled bathrooms and artwork by Steve Keene, while dorms are modern and spacious with an abundance of storage. Located in trendy Long Island City, Queens, The Local also boasts insider knowledge of what’s happening in one of New York’s hottest neighborhoods, including a list of their favorite spots in the area. 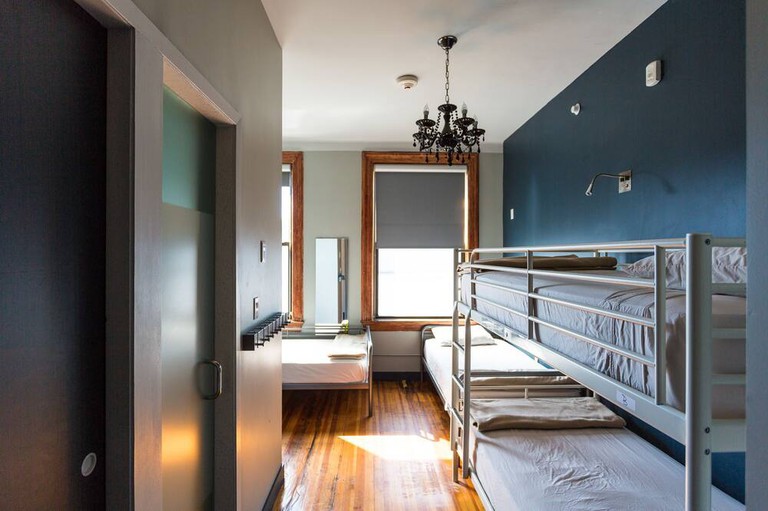 Another Long Island City pick, Q4 Hotel blends right into the hipster neighborhood’s slick aesthetic. Quirky amenities at this art-adorned cheap hostel in New York include a guests’ book exchange library, drink and draw evenings, free outings to the nearby Museum of the Modern Image and even retro game nights. Stay with friends to snag Q4’s reasonable group rate – and to secure a go-to ping pong partner.

What does your quintessential New York City trip look like? Is it hopping subways to see the Statue of Liberty, Rockefeller Center and The Metropolitan Museum of Art? Catching a foul ball at Yankee Stadium, or eating a classic blue plate special at an old-school deli? Whatever you dream up, American Dream will help you realize it. Take a bite out of the Big Apple with a stay at one of the best hostels in New York, located near the Flatiron Building, or at very least a literal bite from an apple, waffle, or any other of their free breakfast items. 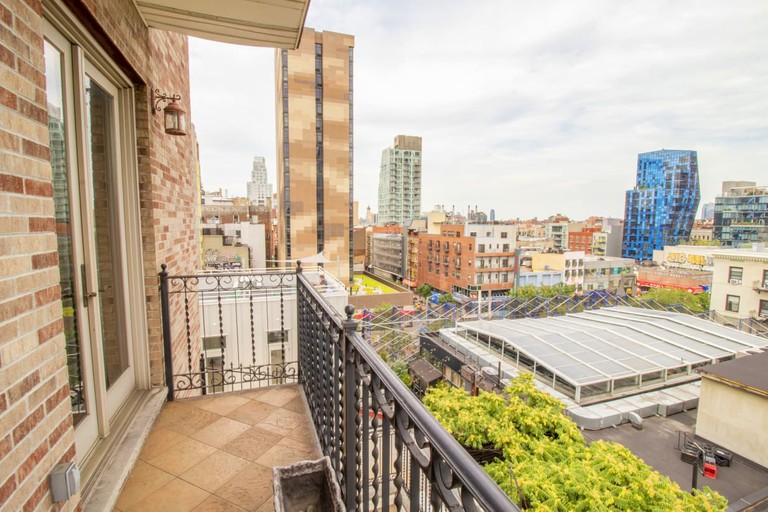 Courtesy of Blue Moon Boutique Hotel / Hostelworld.com
Oversized luxurious rooms come along in NYC once in a blue moon – literally. Blue Moon Boutique Hotel has single rooms with high ceilings and balcony views. If you’d prefer a little company, there are a handful of shared dormitory rooms to get to know others discovering the Big Apple for the first time. Uncover a different side of the city and check out museums like the Museum of Ice Cream, the Museum of Chinese in America and the New Museum, which are all close by.

Is it fun to stay at the YMCA? Find out for yourself! Private rooms, vending machines, swimming pools, saunas, locker rooms and group exercise classes are included in your stay here plus, with Harlem’s iconic Apollo Theater, jazz clubs and great soul food nearby, you can do whatever you feel. Stay at Harlem YMCA and find many, many ways to have a good time. 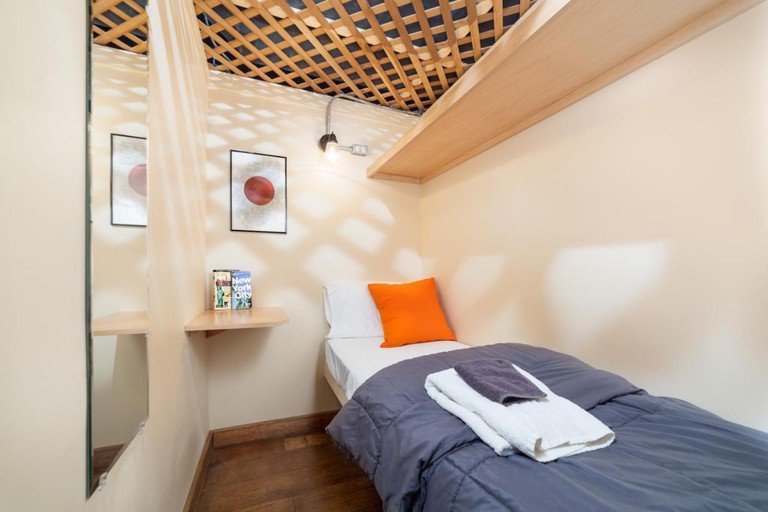 Courtesy of Chelsea Cabins / Booking.com
Get to know one of New York’s hippest neighborhoods at Chelsea Cabins. The single rooms at this New York hostel will more than suffice, especially since you’ll be bouncing around Midtown. The Empire State Building is a few minutes’ walk away, an easy undertaking after you scarf down a free vegetarian breakfast. Times Square is just as close and with Penn Station only two blocks away, you’ll be buzzing around Manhattan so much that you’ll hardly see the inside of your shared bathroom.

Jazz On The Park Hostel 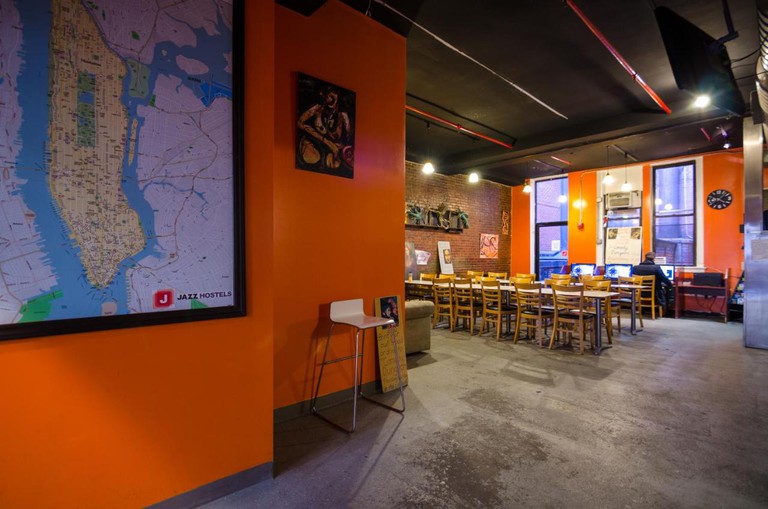 Courtesy of Jazz On The Park Hostel / Booking.com
Jazz up your Big Apple city break with a stay at Jazz On The Park Hostel. Its location alongside Central Park lets you lose yourself in NYC’s gigantic, glorious green spaces. We’re not trying to rush you through the Zoo or Conservatory Gardens, but try to make it back to Jazz On The Park early so you can join one of their group outings. Missed the boat? The front desk will give you a map with a few of their favorite must-visit attractions.

Looking for more budget-friendly stays in the Big Apple? We’ve rounded up Manhattan’s best hostels and the cheapest hotels across New York City to help you save some dollars – and they’re all bookable on Culture Trip.

This is an updated version of an article originally created by Julia Goicochea. Nick Dauk contributed additional reporting.