The 10 Cheapest Places To Drink In NYC 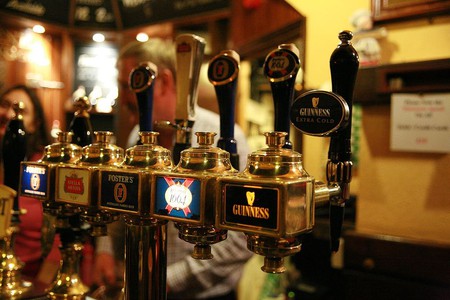 New York City isn’t the cheapest city on Earth. In fact, it’s known for being incredibly expensive, and in terms of drinking, NYC has a reputation for being the land of the $16 cocktail. So while yes, it’s true, drinks here can be expensive, there are cheap options if you know where to look. From old-school dive bars that haven’t changed their prices in years to modern, upscale bars and restaurants that have crazy cheap deals, here are the top places in New York City to drink, even if you’re on a tight budget.

McSorley’s is most famous for being NYC’s oldest bar, and that fame means it’s always packed with an eclectic crowd. Everyone from recently graduated fraternity brothers to groups of old men come here for a glass of either dark or light beer. That’s right: there are only two choices, and for $5 you’ll get two glasses, a seriously good price – especially in this part of town.

Restaurant, American
Facebook
Email
Twitter
Pinterest
Copy link
Share
Royale is a neighborhood favorite. It’s known for its big outdoor patio in the heart of Manhattan, its incredible underrated burger, and for serving beers and cocktails at reasonable prices. The patio is open year round, the burger is worth trekking across the city for, and if you eat it with a $3 draft beer at happy hour, you – and your wallet – will surely be very happy. Even outside of happy hour, beers are between $4 and $6, and Royale is a great place to hang.

Restaurant, Italian, $$$
Facebook
Email
Twitter
Pinterest
Copy link
Share
If you’re looking to drink mimosas or bloody marys at brunch, do it at Pagani. This West Village Italian restaurant has brunch drinks at a crazy price: $2.89 each. It seems too good to be true, yes, but it’s because the address of the restaurant is 289 Bleecker Street. So yes, you can drink six mimosas for under $20, which may be impossible to do anywhere else in NYC.

Rye Restaurant & The Bar Below Rye

Bar, Restaurant, American, $$$
Facebook
Email
Twitter
Pinterest
Copy link
Share
If you want to drink for cheap but you’re not feeling a dive bar, head to Rye in Williamsburg, Brooklyn for their happy hour. Rye offers an absurd deal on weekdays from 5:30pm to 7pm: $5 old fashioneds and $5 cheeseburgers. And at Rye, we’re not talking about some watered-down rail drink in a plastic cup; we’re talking a hand-crafted cocktail from an upscale whiskey bar.

Bar, Pub Grub, American, $$$
Facebook
Email
Twitter
Pinterest
Copy link
Share
Jimmy’s Corner is the sort of bar you’d never expect to find on a busy block in Midtown, Manhattan – it’s one of the few locally owned bars remaining in the neighborhood. It’s owned by Jimmy, who refuses to raise his drink prices even as the neighborhood gets more and more expensive, but his strategy clearly works. His customers are loyal, the bar is always full, and the beers are never more than a few bucks.

Bar, Pub Grub, American, $$$
Facebook
Email
Twitter
Pinterest
Copy link
Share
A lively wine bar in the East Village, Ten Degrees’ two-for-one glasses of wine until 8pm each night are legendary. While most bars have happy hours early in the week, Ten Degrees’ deals run Friday and Saturday, making it the perfect spot for a glass of wine before dinner on any weekend night. The place is always full, and with a deal like this and excellent small plates, it’s easy to see why.

Rudy’s Bar & Grill has always been known as a place to drink and eat for cheap, and the fame they’ve acquired for giving out free hot dogs doesn’t hurt. Opened in 1919, it’s one of the oldest bars in NYC, and nearly a century later it seems that their prices have hardly changed. For the best deal, order a bucket of their house beer for $7.75 and share it with a group of friends (or keep it all for yourself). 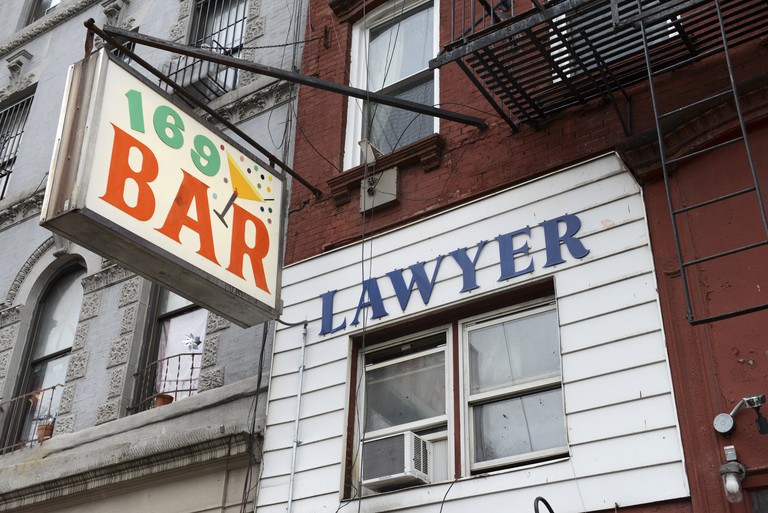 Columbus Park in Chinatown, New York, USA. | © Christine Navine / Alamy Stock Photo
One of NYC’s coolest dive bars, 169 Bar is always packed and always a good time. Aside from the awesome vibes, their daily happy-hour deals starting at 12pm also draw crowds – think $1 off cans of beer, $2 off everything else, and $3 for a beer and a shot. The bar is already relatively cheap, and with deals like this it’s a no brainer. Plus, Aziz Ansari is known to frequent the place.

Bar, American
Facebook
Email
Twitter
Pinterest
Copy link
Share
Jeremy’s Ale House opens each day at 8am, and regardless of what you may think of it, construction workers, fishermen, and others with night jobs or early morning jobs come here after their shifts. Jeremy’s beers are super cheap and served in giant, 30-ounce styrofoam cups, so don’t worry if you have too many and drop your ‘glass’ on the floor. The vibes here are fun any time of day, so bring a group and don’t be afraid to get rowdy.

Bar, American, $$$
Facebook
Email
Twitter
Pinterest
Copy link
Share
The Commodore is a Williamsburg bar and restaurant that’s a staple of the Brooklyn bar scene. It definitely gets busy on weekend nights, but that might be because they serve serious cocktails at crazy good prices. The best drinks on their menu are over-the-top and decked out with fruit or a tiny umbrella, and most of them are $7 or $8. Go for ‘the commodore’, a piña colada with an amaretto float – it’s sinful, dangerous, and downright delicious.