No Country: The Global Voice Of Non-Western Art

Dissolving geographical borders and predetermined identities, the Guggenheim/UBS Map project No Country created refreshing dialogues which address contemporary art in South and Southeast Asia. Navigating through themes such as historical importance, collective and private memory and Western perceptions, the Eastern artists engaged and critiqued their countries on a global scale, as Bansie Vasvani reported from New York. No Country will next be on view at the Asia Society Hong Kong Center from 30 October until February 2014. 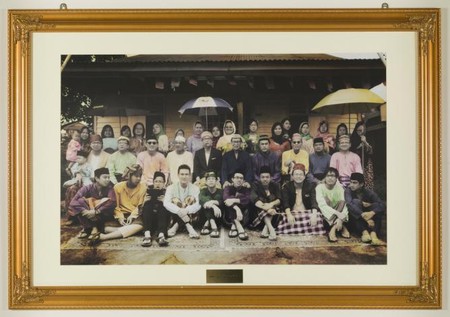 The Guggenheim/UBS Map Initiative that focuses on art from South and Southeast Asia opened its first exhibition in New York on February 22, 2013. Having ended its New York run on May 22, No Country will next be on view at the Asia Society Hong Kong Center from late October to mid-February 2014. This endeavor not only addresses the growing significance of non-western art, it also legitimizes its place in a larger global discourse. Covering a wide geographical swath that includes The Philippines, Indonesia, Thailand, Malaysia, Singapore, Vietnam, Cambodia, Myanmar, Pakistan, Bangladesh, and India, the show establishes a new international lingua franca. Titled, No Country, taken from W.B. Yeats’s well-known poem, Sailing to Byzantium, the works display an easy fluency between references to local history and its reach beyond.

Vincent Leong’s two digitally aged photographs, Keeping up with the Abdullahs, 2012, shot in the style of the 19th century Malay sultanate, refer to Malaysia’s history of ethnic segregation and strife. Part sepia tone colour, the gatherings of Chinese and Indian immigrants in Islamic garb point to pre-independent Malaysia and the subject of cultural assimilation in a predominantly Muslim country. Leong’s historical photography is not only a critique of the difficultly of racial harmony in his own country, but it also spawns critical thought regarding worldwide ethnic strife. In this process, local history is validated as it transcends its immediate implications by drawing attention to the growing significance of global racial discord. 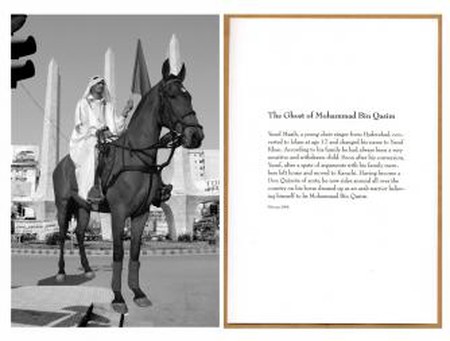 In a similar vein, Bani Abidi’s nine black and white inkjet prints, The Ghost of Mohammed Bin Qasim, 2006, explore depictions of an early colonial founder of Pakistan. Mohammed Bin Qasim is often referred to as the first Pakistani who conquered the region along the Indus Valley in about 711 A.D. that is now Pakistan.This narrative of a young man who dresses up as Mohammed Bin Qasim and poses on horseback in front of major monuments has reinserted the importance of Qasim in the minds of young Pakistanis. Abidi’s reconstruction of history through this manner of historical self-absorption not only reconfigures boundaries between public and private memory, it also finds a comfortable place for a country steeped in centuries of ancient lore.

The portrayal of history from the regions represented in the show has also become characteristic of a social and cultural place from which artists can design their modes of production and active dialogue. What we see is the development of a new criteria towards the formation of a ‘translocal’ culture. In the Indian filmmaker Amar Kanwar’s trilogy, A Season Outside,1997-8, To Remember, 2003, and A Night Prophecy, 2002, the philosophy of non-violence and, oftentimes, its associated feeling of impotence is one of the themes that is examined. A Season Outside investigates the area surrounding the India/Pakistan border and the daily aggression that plays out there. Police beating, protests, soldiers marching on either side of the border, and hopeless communication between inhabitants of both sides are depicted with the artist’s ruminative voiceover questioning whether Mahatma Gandhi’s doctrine of non-violence could work as an effective form of intervention even today. This mixture of documentary and poetic visual essay progresses from a specific historical moment to one of ongoing significance. A new identity for these artists is formed as they reposition the place of local political and historical details such that their artistic endeavour morphs into a larger global discourse.

Many works show an important movement away from the representation of politics in art to the politics of representation. Poklong Anading’s Counter Acts, 2004, is comprised of four chromogenic transparencies in light boxes. In these large, four paneled photographs subjects hold circular mirrors in front of their faces that reflect the light from the camera back to itself. Here, if the artist’s intention is to illuminate the subject, then that effort is obfuscated by the glare in the photographs. Anading’s enterprise overturns the traditional conception of photography, while it engages in re-conscripting any preconceived ideas of art from the Philippines where he lives. The artist leads the way towards a new process of assimilating material from the local region into the broader field of contemporary art.

Navin Rawanchaikul’s painting, Places of Rebirth, 2009, is inspired by billboards in Pakistan, the birthplace of his ancestors, who migrated to Thailand. Made in the format of oversized Bollywood movie posters with garish colors and a festoon of characters, the artist inserts an image of his Japanese wife and child in a Thai Tuk Tuk (motorized three wheeler with a passenger cabin) crossing the border from Pakistan to India. An active social commentator, his work presents a rereading of personal and regional history as he draws attention to the notion of the diaspora in the world today, and its effect on the formation of identity. By privileging his mixed Thai, Pakistani, and Japanese heritage, Rawanchaikul also pokes fun at the western curator’s preoccupation with defining a single eastern identity.

Finally, although some of the works shown at the Guggenheim Museum are not as powerful as others, No Country makes us ruminate productively as it opens new art, cultural, and political intersections that are continually being reworked in different parts of the world. Don’t miss its Hong Kong run at the Asia Society Hong Kong Center.