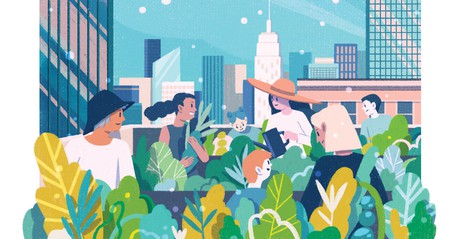 The Big Apple isn’t the first place you’d think of as a haven for agriculture, but urban farms have started popping up on rooftops and in old warehouses across the city, building an eco-conscious community focussed on transforming the city into more than a concrete jungle.

Before New York City was crowded with soaring skyscrapers and carved up by a grid system of roads, the five boroughs were largely devoted to farmland. Central Park’s Sheep Meadow was actually full of grazing sheep, and farmers cultivated produce in places now known as Midtown and the Upper West Side. Although all of that has long since disappeared, some New Yorkers are attempting to return to the city’s pastoral roots, developing farmland in the most unexpected places. 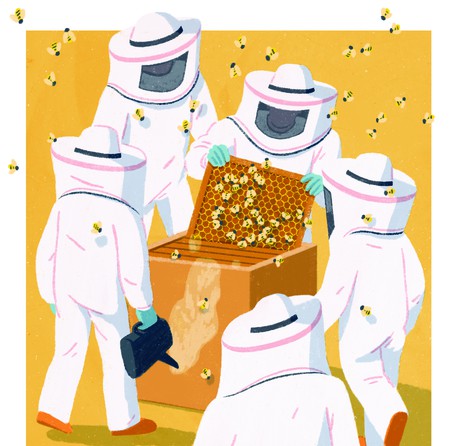 Andrew Coté is the wizard beekeeper behind Andrew’s Honey – a local NYC honey business that manages 40 hives scattered across rooftops, terraces and gardens throughout Manhattan, Brooklyn and Queens. A fourth-generation beekeeper, Coté comes from a family that has kept bees for over a hundred years.

On any given day, you’ll find Coté weaving his way through the boroughs in his car, visiting and maintaining his far-flung apiaries. Each of these unassuming boxes is home to a colony of bees that cover its wooden frames in sticky honey.

Clad in his beekeeping suit, Coté tends to the hives. He takes a bee smoker (similar to a fire bellows) and puffs grey clouds into the mouths of the hives to calm the bees. Braving the buzzing mass around him, Coté pulls out each long frame to examine the worker bees and pry out any honey ready to be extracted.

Although the practice has been around for centuries, beekeeping didn’t become legal in New York City until 2010. Nowadays, the city is home to a slew of urban apiaries. What sets Andrew’s Honey and other small-batch apiaries apart from mass-market producers is a confluence of location and simplicity.

“The honey from our hives is a hyperlocal product that is made from a collection of nectars not found anywhere else in the world,” Coté says. “The collection of trees and the forage that New York City bees enjoy cannot be replicated anywhere else.”

Instead of pasteurizing his honey, Coté simply filters out the wax using a cheesecloth, guaranteeing a pure product. He bottles it and sells the jars at Union Square Greenmarket.

Even after 40 years, Coté still loves the process. “My favourite part about beekeeping – other than feeling a pride [in] carrying on a lineage with my own boys – [is] working with the honeybees,” he says. “I find it an endless source of fascination.” 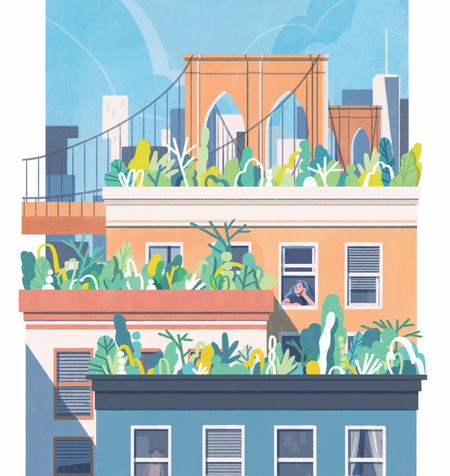 There’s not much to see when you’re below Brooklyn Grange’s newest urban farm, stationed on top of an office building in Sunset Park, Brooklyn. But a trip to the rooftop reveals an expansive area – 13,000 square metres (140,000 square feet) of space – covered in soil (about 5,100 square metres (55,000 square feet) of cultivated space), where climbing stalks of tomatoes curl up out of the dirt. Brooklyn Grange is the brainchild of Ben Flanner and Anastasia Cole Plakias, two friends who had long been looking to create a fiscally sustainable model for urban agriculture. They opened their first rooftop farm in Long Island City, Queens, in 2010, followed by the Brooklyn Navy Yard farm two years later. Altogether, Brooklyn Grange boasts a total of 2.3 hectares (5.6 acres) of farmland, spread across three NYC rooftops.

Between the three farms, Brooklyn Grange produces 36 tons of produce a year: baby lettuce, mustard greens, herbs, tomatoes, peppers, aubergines, swiss chard, kale, carrots, radishes and more, along with crops specific to certain neighbourhoods. In Sunset Park, for instance, there are strong Asian and Central American communities, so the harvest reflects the local needs, with tomatillos, papalo and bok choy.

Much of Brooklyn Grange’s produce is distributed to a host of restaurant kitchens in New York City, such as Roberta’s, Gramercy Tavern and Vinegar Hill House, as well as smaller grocery stores. Brooklyn Grange makes appearances at farmer’s markets in Sunset Park, Greenpoint and Long Island City, and you can go straight to the source and pick up vegetables and other products (such as hot sauce and honey) from the farm stand. “We can’t avail ourselves of traditional farm equipment like tractors, so everything is done by hand,” Cole Plakias says. “Part of our mission is to create green jobs, so we’re happy to invest in human capital.”

What makes Brooklyn Grange so different from so many farms is its close ties to the community. “We believe that it’s essential if you’re farming in a city to share that work and green space with your community,” Cole Plakias says. Along with open houses and farm tours, the Grange hosts a number of events, including rooftop yoga, tasting tours, beekeeping classes, farm dinners and summer-camp field trips.

Cole Plakias says: “We need to show people what is possible and that there are still ways to innovate our food system and reimagine what cities of the future can look like.”

Above a nondescript storefront in Bushwick is Edenworks – an indoor aquaponic-ecosystem farm that’s home to barrels of fish and planters with microgreens poking from the soil.

Edenworks was founded by Jason Green, Ben Silverman and Matt La Rosa, who were worried about the environmental repercussions of industrialized agriculture and wanted to tackle the problem before it was too late.

“I like problems that everybody can feel and benefit from the solution,” Green says. “And food was appearing to be that challenge.” 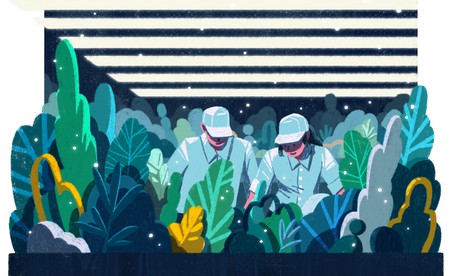 The team’s approach to indoor farming involves considering the whole ecosystem. The water that the fish are grown in is filtered and broken down; the fish waste is mixed with cultures and bacteria, then morphed into fertilizer, used to grow the microgreens. This fertilizer includes materials that would normally have been discarded.

The result is a colorful display of microgreens – shades of green tinged with pinks, yellows and purples. To date, Edenworks has launched two microgreen products: the Spicy Microgreens, a tangle of radishes, mustard greens and cabbage, and the Mighty Microgreens, with cabbage, kale and broccoli greens. On the fish side, the team is producing striped bass, with plans to roll out new products soon.

“[We’re taking] all the pieces that nature has provided – animals to provide waste, all that bacteria and fungus that’s breaking down the waste – and making it available to plants,” Green says. “We’re just providing a consistent climate for nature to do its thing. It’s really getting back to nature.”