Middle Eastern Fast-Casual Dining Is Stepped Up at Dez 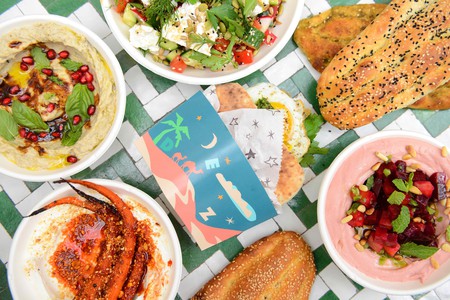 Fast-casual dining continues to take over New York City’s culinary landscape, with the newest addition being Dez, a café in Nolita that’s focused on celebrating both classic and modern Middle Eastern dishes.

Dez is the brainchild of fast-casual expert Samantha Wasser – co-founder of By Chloe (known for its bright vegan fare) and The Sosta (a quick-service pasta joint) – and Canadian-Israeli celebrity chef Eden Grinshpan, known for her Cooking Channel show Eden Eats and for judging Top Chef Canada. The duo makes sense for Dez: Wasser has championed the fast-casual dining model, and Grinshpan comes from a Middle Eastern background.

The model at Dez is simple and modern. You order at the counter and, upon paying, provide a cell phone number. As soon as the food is ready, you receive a text indicating that a tray is available to pick up. Everything comes out quickly, meaning that people can be in and out within 20 minutes – and even less if they’re taking it to go – with high-quality, healthy fare. Plus, prices are reasonable; nothing’s more than $14, with smaller dishes ringing in at $6. 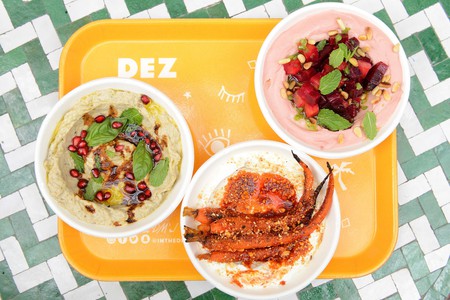 Mezes are small and shareable, ready to be mopped up with house-made pita | © Dez

“Diners’ preferences and habits are changing,” Wasser says. “They have become so much more aware of the food they are putting into their bodies, where it’s sourced from and how it’s prepared.”

Middle Eastern cuisine has always been a source of inspiration for Grinsphan. Having grown up in Toronto, the Eden Eats chef was introduced early on to Israeli and other cosmopolitan foods: “Toronto is a multicultural city,” she says. “One of my earliest food memories is trying Persian rice made by our family friends from Iran.”

Dez may be a quick-service setting, but the menu has both simple and complicated dishes. They are split into four categories: mezes, salads, bowls and pita sandwiches. Grinshpan champions typical Israeli ingredients such as za’atar and tahini, but the Dez chefs don’t always keep it traditional. 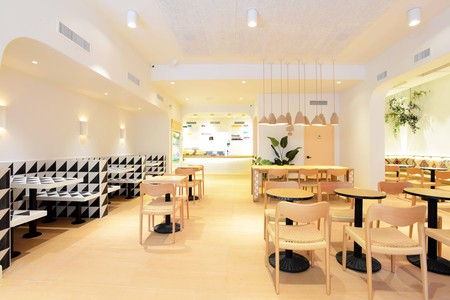 The interior is bright, lined with sand-colored chairs and plenty of plants | © Dez

On the menu, there’s a play on a Persian jeweled rice: saffron-infused rice crowned with hunks of baharat grilled chicken, pistachios, herbs and mint-lemon yogurt. The Levantine fattoush is a shimmery mix of basil, mint, kale, cucumber, fennel and watermelon radish. And then there are dishes like the popular pink beet hummus, which is ready to be mopped up with nigella-flecked pita, and a shawarma burger – a thick puck of beef slipped into pita along with crispy eggplant, cucumber, red onion, tahini and zhoug (spicy herb sauce).

Though there are many other Middle Eastern fast-casual establishments scattered across New York City (like the mini-chain Taïm and DC-born Cava), Dez manages to stand out by focusing on the customer experience. The open and colorful space is dotted with an array of potted plants. On one side are a couple of black-and-white booths, and on the other is a banquette stitched with colorful Moroccan rugs.

Is fast-casual dining the future? If the New York’s current culinary landscape is anything to go by, it certainly looks like it.

“I truly believe that fast-casual restaurants are changing the way customers eat out on a regular basis by creating an opportunity for people to have more accessible and healthier options without the cost and investment associated with a full-service dining experience,” Wasser says.