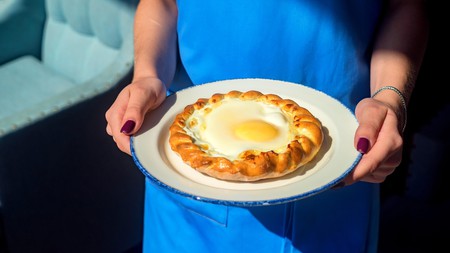 Khachapuri, a cheese bread and the national dish of Georgia, is discovering a flood of popularity in New York City, thanks in part to both social media and an influx of Georgians looking to introduce their cuisine to New Yorkers.

In the country of Georgia, a guest is considered to be a gift from God. So it should come as no surprise that within five minutes of our arrival at Oda House, a Georgian restaurant on Manhattan’s Upper East Side, the restaurant’s owner and executive chef, Maia Acquaviva, has brought out half the menu for the two of us to share: fresh tomatoes swimming in a walnut pesto, wedges of honey-walnut cake, lamb simmered in white wine, and, of course, khachapuri: a simple, perfectly decadent cheese bread.

“For Georgians, khachapuri is number one,” Acquaviva explains. “We eat it for everything: breakfast, lunch, dinner.”

This sentiment is hardly a siloed-off one. Tamara Chubinidze, a native Georgian and the owner of NYC’s newest Georgian restaurant, Chama Mama, echoes Acquaviva’s devotion to the dish. “We always used to have the dough and cheese at home. There was always flour on the kitchen table,” she says. “Khachapuri to Georgians is like air. Without khachapuri, we don’t breathe.”

There are over half a dozen common varieties of khachapuri popular in Georgia: most include some combination of freshly baked bread, melted cheese, butter and a runny egg. With such crowd-pleasing ingredients, it’s not surprising that khachapuri has remained a staple in the country; in fact, it’s become so popularized that it’s also experiencing a surge of international appeal in New York City. 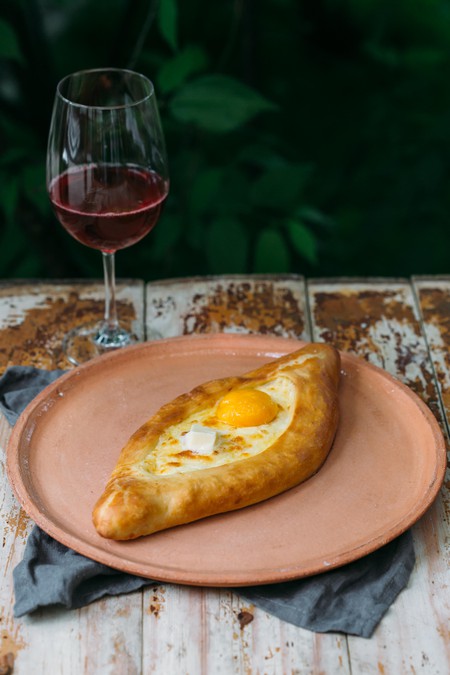 The history of khachapuri

After centuries of trade funneled through Georgia via the Silk Road, Georgian cuisine became a unique melting pot of Western and Eastern flavors: boiled meat and potato dumplings sprinkled with black pepper (khinkali) and fried eggplant rolled with a walnut-garlic paste and pomegranate seeds (badrijani nigvzit). But among the dishes of Georgian cuisine, it’s the humble khachapuri that’s emerged as a superstar.

It may be the country’s national dish, but a definitive history remains largely unrecorded. For most Georgians, khachapuri has always been a part of daily life. In fact, it was deemed so integral to the country that the art of khachapuri-making was awarded the status of “Intangible Cultural Heritage” in January 2019 by the National Agency for Cultural Heritage Preservation of Georgia. This new status is a high honor, offering the beloved bread a formal place in the country’s recorded history.

Throughout Georgia, “khachapuri” is a term generally used to refer to any type of traditional cheese bread, since there isn’t simply one recipe. Instead, styles vary depending on the region and its resources. In Samegrelo in western Georgia, an abundance of cows results in megruli khachapuri, a round dough laced with soft cheese that’s topped with even more melted cheese. In the mountainous Racha region, cows are harder to come by, so khachapuri dough is instead jammed with pinto beans, called lobiani. Perhaps the most famous of the bunch is adjaruli, which hails from Adjara, a coastal region bordering the Black Sea. Fittingly nicknamed “cheeseboat,” adjaruli arrives looking like, well, just that – a boat crafted out of bread with a pool of bubbling molten cheese inside. An egg yolk and a thick pad of butter wait to be mixed in. 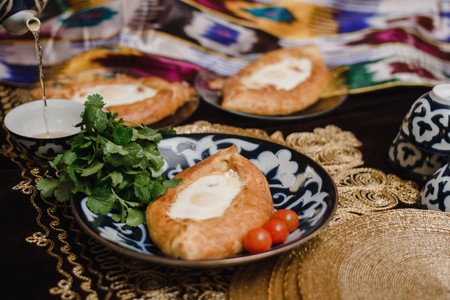 The warm bread is filled with a mix of cheese, butter and a runny egg | © Анастасия Короткова / Alamy Stock Photo

The origin of khachapuri’s global internet fame can be partly tied to the 2014 Winter Olympics in Russia, a nation known to have a soft spot for Georgian fare. A reported 175,000 khachapuri breads were consumed over the course of the Games. Despite its ancient past, khachapuri (particularly adjaruli) seems to fit perfectly into today’s Instagram zeitgeist. It offers the opportunity for endless “cheese pulls”; the mixing of the egg and butter into the melted cheese is a production ripe for recording; and for many living outside Georgia, the dish remains a new discovery. 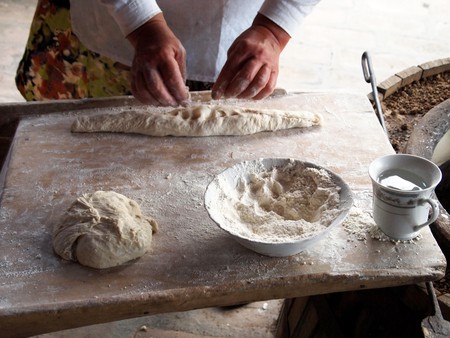 At Chama Mama, an entire section of the menu is dedicated to adjaruli, despite the fact that Chubinidze also offers four other varieties of khachapuri. In Chubinidze’s opinion, adjaruli is no more delicious than the others, but she puts it at the forefront because she knows it’s what’s likely bringing first-timers in.

Also lending a hand in khachapuri’s newfound global fame is a spike in tourism to Georgia. In 2018, the country welcomed 8.7 million international visitors, nearly double the number it saw just seven years prior. As more visitors share photos of the food from their travels, hungry followers seek it out at home and share it on Instagram, too. 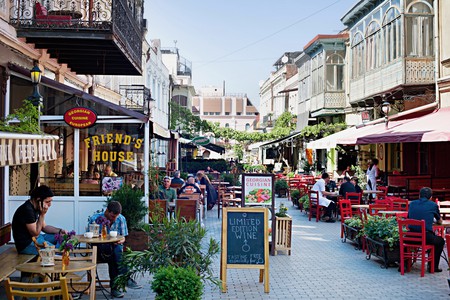 Although it’s popular in Georgia, khachapuri has only recently found a surge of international fame | © Ivan Nesterov / Alamy Stock Photo

Georgian cuisine has been slowly but steadily making a name for itself in New York City over the past seven years. Today, three Georgian restaurants call Manhattan home. In Brooklyn, closer to 10 are distributed throughout the borough. Most land in Brighton Beach, a neighborhood with over 25,000 residents of Georgian, Russian and Ukrainian descent.

In 2013, Oda House was the first Georgian restaurant to open in Manhattan. Initially, the idea was met by fierce hesitation from Acquaviva’s Georgian friends in New York.

“They told me, ‘People don’t even know where Georgia is, and you want to serve them Georgian food? Are you crazy?’” she says. “I said, ‘Yes, I am!”’

The restaurant brought in only $26 on its second day in business, but her faith never wavered. “Give it a few months and there will be a line outside,” she told her staff. She was right. Two months after it opened, New York magazine reviewed the restaurant, and by the third month, there was a line out the door. In spring 2019, Acquaviva opened a second location on the Upper East Side, and she says she has plans to open up a third outpost in the near future. 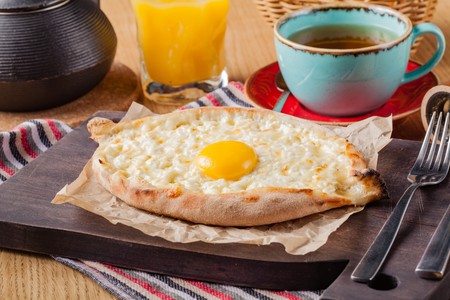 An array of NYC restaurants are highlighting the dish, from Chama Mama in Chelsea to Toné Café in Brighton Beach | © Andrey Cherkasov / Alamy Stock Photo

Chama Mama’s Chubinidze vividly remembers visiting Oda House shortly after it opened. “All of us Georgians were so proud of her,” she says. “When I was there, I asked her, ‘How can I help? What can I do to make it even better?’”

For Chubinidze, the answer came six years later when she finally opened her own Georgian restaurant. So far, she says, the majority of her customers have been “curious New Yorkers.”

“You know how New Yorkers are: they have everything,” says Chubinidze. “Name the cuisine and they know where to go. Not only that, there’s variety. Georgian [cuisine] is still very unique. They’re just discovering both the cuisine and the country.”

Nikoloz Chkheidze, co-owner of Toné Café, the oldest Georgian bakery in Brighton Beach, says the clientele of his restaurant used to be primarily neighborhood locals looking for a taste of home. These days, he sees more visitors making the journey out to Brighton Beach to visit one of the many Georgian restaurants in the area. After the New York Times published a glowing review of Toné Café in 2015, Chkheidze says, “It was kind of a disaster here for several days. So many people!” 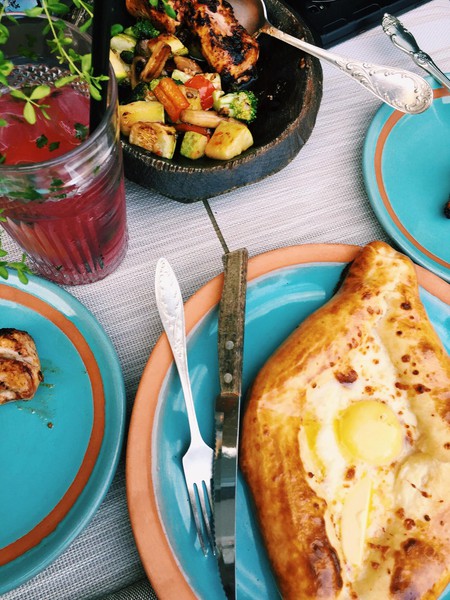 Both Chubinidze and Acquaviva are committed to keeping the food at their restaurants as traditional as possible, but they admit that in reality, beloved Georgian dishes like khachapuri still taste different in New York than in Georgia.

As with the fabled secret ingredient of New York bagels, Chubinidze traces some of the unavoidable differences to the water. “I think we’re doing a good job with our dough,” she says. “But still, we can never get it to be exactly the same as the adjaruli that’s made on the Black Sea.”

The variations of cheese can also range heavily here. In Georgia, most khachapuri is made using the regional cheeses imeruli (crumbly and feta-like) and sulguni (elastic, mozzarella-like). At Chama Mama, Chubinidze imports Georgian cheeses to keep her khachapuri authentic, while at Oda House, Acquaviva uses her father’s recipes to make the cheeses in house. The chefs at Toné Café use a combination of feta, mozzarella and a third variety the chef wants to keep secret. 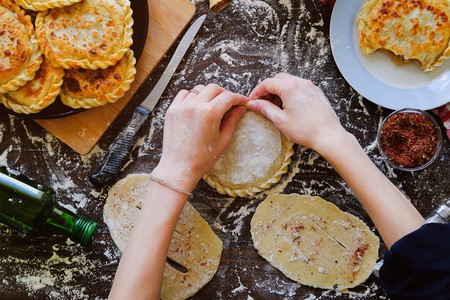 In America, khachapuri is invariably different, thanks to the water and the cheeses available | © Aleksandr Zubkov / Alamy Stock Photo

As khachapuri begins to establish itself within the American food scene, some restaurants are already putting an American spin on the dish. At Cheeseboat, a Georgian spot in Brooklyn’s Williamsburg, there are versions of khachapuri featuring atypical combos like brie with honey and mascarpone swirled with house-dried cherries.

Cheeseboat may stray from the traditional khachapuri recipes followed in Georgia, but the restaurant also boasts 13,000 followers on Instagram, more than triple the number any of the other top Georgian restaurants in New York have garnered. Clearly, Cheeseboat’s creative interpretations – and adored footage of cheese pulls – are resonating with an American palate.

New York’s other Georgian restaurant owners appear to be decidedly split on whether or not to put a spin on a cuisine Americans are only starting to become familiar with. At Oda House, Acquaviva has no plans to deviate from tradition.

“My cuisine is exactly Georgian, nothing else,” she says. “I opened my restaurant for American people – for people who don’t know where Georgia is or what the food is like. I want to show my culture to New Yorkers.” 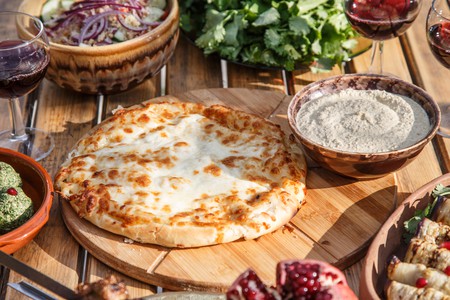