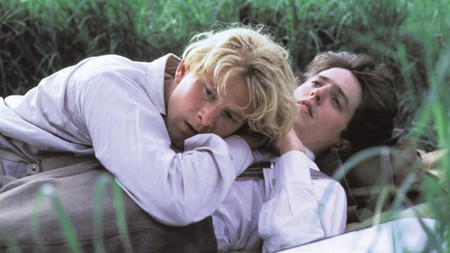 Merchant-Ivory’s neglected film of E.M. Forster’s novel Maurice has been restored and is now playing at the Quad Cinema in Manhattan. Thirty years after its original release, it should be recognized as a classic.

Producer Ismail Merchant and director James Ivory’s decision to follow their rapturously received A Room With a View (1985) with an adaptation of Maurice might have irked E.M. Forster, the retiring author of the novels on which both films were based. Maurice told a passionate semi-autobiographical story of a formative gay love affair. Neither Forster himself nor the British literary establishment ever had much faith in the book. 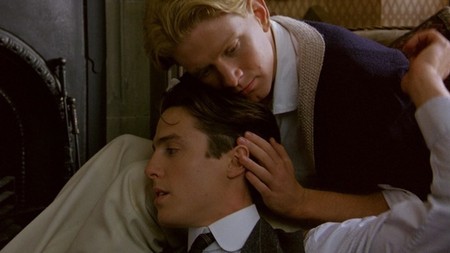 Fearful for his career and standing, given Britain’s repressive laws against homosexuality, Forster forbade the novel’s publication during his lifetime. It was finally published 1971, but its critical reception and posthumous isolation led to it being seriously undervalued as a major work in Forster’s canon.

“We’ll have to see where history finally consigns the book,” Ivory said when the Maurice movie was released in 1987. “It’s not a great work, but I’ve read that it’s atrocious and hopeless, and it’s absurd to say that. For me, it was simply good stuff to make a film out of. I don’t think it’s generally true that writers can’t write in the most powerful and persuasive way about things which are very close to them. I think the value of the book is precisely its closeness to Forster, although he later had doubts about it and said, ‘There’s nothing more obdurate to artistic treatment than the carnal.'”

“Your imperatives for writing a book at the age of 35 might change over the course of 50 years—you might end up with quite different feelings about that book, or a film based on it,” Ivory added. “Forster might finally have shrugged and felt it was all very much far from him and no longer of much interest, although he did write that his favorite books were Maurice and The Longest Journey. Since we were faithful to his idea of a happy ending, I have to imagine that he would have approved of the film.”

Forster’s self-governing executors at King’s were mindful of his aversion to any of his books being filmed. They were better pleased with A Room With a View (1985) than with David Lean’s adaptation of A Passage to India (1984), but still initially resisted Merchant-Ivory’s plan to film Maurice, balking at the book’s supposedly dubious merit rather than its confessional tone. 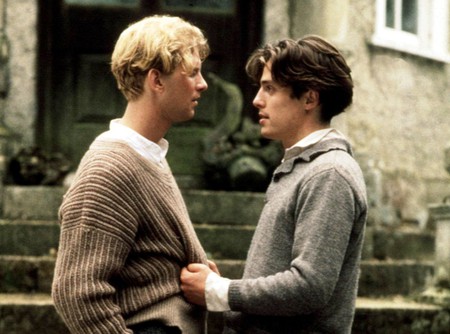 “I was very hostile,” George Rylands, one of the executors, told The New York Times. ”I never thought it was a good book. I said please do Where Angels Fear to Tread instead.” The dons changed their mind when they read the Maurice screenplay written by Ivory and Kit Hesketh-Harvey, a then recent Cambridge graduate.

“I was persuaded that it could be made into something better than the book, which is what we expect,” Rylands said during the filming of Maurice at Cambridge in November 1986. Where Angels Fear to Tread, directed by Charles Sturridge, was released in 1991 and Merchant-Ivory’s film of Forster’s Howards End, written like A Room With a View by Ruth Prawer Jhabvala, followed in 1992. The screenwriter Angus Fletcher has been hired by the producer Adrian Munsey, who had known Forster’s at Kings, to adapt The Longest Journey, the only Forster novel as yet unfilmed,

Forster wrote Maurice after his inspirational 1913 visit to the home in Millthorpe, Derbyshire, of the early gay rights and women’s rights champion Edward Carpenter and his working-class lover, George Merrill. The novel ended a hiatus in his career as a novelist. Following the publication of Howards End in 1910, he had struggled for three years to write Arctic Summer, taxed as he was by the need to write about the taboo subject of relationships between men, rather than relationships between men and women. He never finished Arctic Summer.

“Having sat for an hour in vain trying to write a play, will analyze causes of my sterility,” Forster wrote in his diary on June 16, 1911. “Weariness of the only subject that I both can and may treat—the love of men for women and vice-versa.” 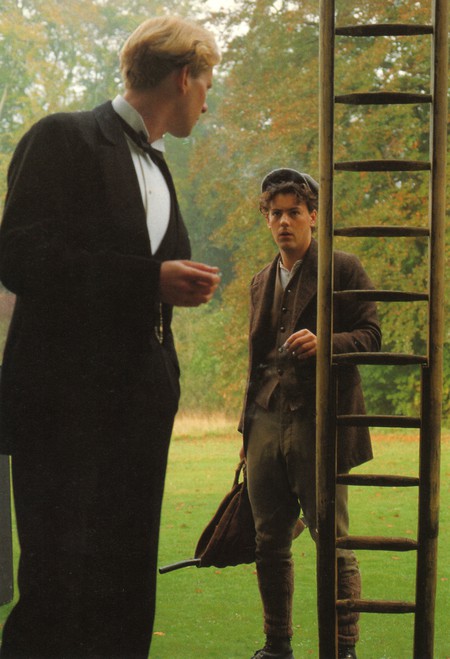 Maurice proved a cathartic release for Forster. Completed three years before he had his first sexual relationship, it was an act of self-disclosure impassioned by his acute understanding of society’s homophobia and hypocrisy. The story of the platonic love affair between the Cambridge undergraduates Maurice Hall (played by James Wilby in the film) and Clive Durham (Hugh Grant) was inspired by Forster’s chaste affair—a matter of kissing and embracing—with H.O.M. (Hugh) Meredith, a fellow member of the Cambridge intellectual society The Apostles.

Meredith encouraged Forster. “But if H.O.M. was the initiator, it was Forster for whom the affair counted most,” wrote P.N. Furbank in E.M. Forster: A Life. “For him, it was immense and epoch-making; it was, he felt, as if all the ‘greatness’ of the world had been opened up to him. He counted this as the second grand ‘discovery’ of his youth—his emancipation from Christianity being the first.”

Forster and Meredith continued their friendship after leaving Cambridge in 1901. They may have consummated their relationship in 1910, by which time Meredith was married. But Forster was dismayed by the indifference Meredith expressed toward the evolving manuscript of Maurice, which Forster showed him on a visit to Meredith’s home in 1913. Meredith never meant so much to him afterwards. 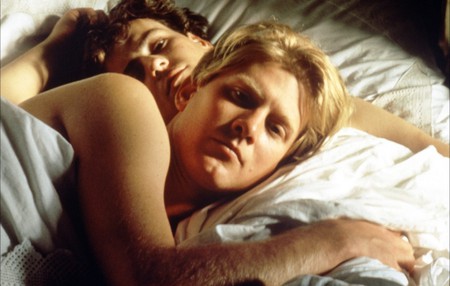 That sense of loss is fully realized in the Maurice film. Wilby’s Maurice—who incarnates Forster’s vision of a man “completely unlike myself or what I supposed myself to be: someone handsome, healthy, bodily attractive, mentally torpid, not a bad businessman and rather a snob”—is cruelly disillusioned by the ebbing of his romance with the fastidious intellectual, Clive.

The relationship that blossoms at Cambridge flounders in the suburbs. Clive marries the rich, naive Anne (Phoebe Nicholls). Only in the arms of Clive’s under-gamekeeper Alec Scudder (Rupert Graves) does Maurice come to terms with his homosexuality. Illustrative of Forster’s “only connect” exhortation, their union embodies both sexual liberation and social equality.

“A happy ending was imperative,” Forster wrote in his 1960 afterword to Maurice. “I shouldn’t have bothered to write otherwise. I was determined that in fiction anyway two men should fall in love and remain in it for the ever and ever that fiction allows, and in this sense Maurice and Alec still roam the greenwood. I dedicated it ‘To a Happier Year’ and not altogether vainly. Happiness is its keynote.” 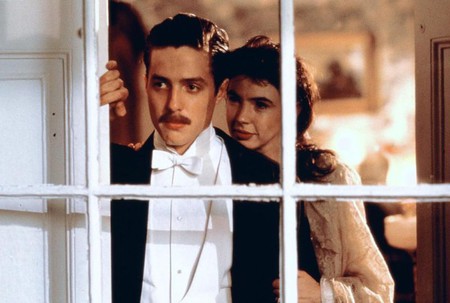 In writing Maurice, Hesketh-Harvey observed in 1987, Forster “was treading cautious ground [and] felt he was the lone voice in the wilderness at that time. He was determined, in fiction at least, that two men could end up happily together, realizing in many ways that this was a pipedream—a notion that is under further attack in the 1980s.”

Homophobia was on the rise in Britain at the time of Maurice’s filming. The stigmatization of AIDS/HIV as a gay disease led to a right-wing campaign to stop local authorities and the Greater London Council from funding LGBT groups.

In May 1988, Margaret Thatcher’s Conservative government passed an act containing an amendment, the infamous Clause 28, that stated local authorities “shall not intentionally promote homosexuality or publish material with the intention of promoting homosexuality” or “promote the teaching in any maintained school of the acceptability of homosexuality as a pretended family relationship.” (The law was repealed in 2003.) 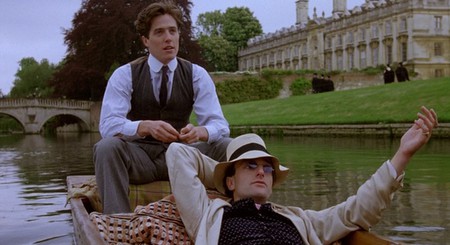 “In making Maurice, we were very anxious to convey the sense of stress and the complete persecution of homosexuals which obtained at the beginning of the [2oth] century and which, it’s my great fear, could return,” Hesketh-Harvey continued. “I think cinema audiences need to be reminded what it must be like to be of that temperament in a world completely set against it. The Risley scenes serve to point that out.”

End of the affair

Maurice’s Viscount Risley is a flamboyant homosexual—modeled by Forster on the critic, biographer, and Bloomsbury star Lytton Strachey (who told Forster he found its happy ending “wobbly”). Risley unwittingly introduces Maurice and Clive at Cambridge and later is arrested, tried, and imprisoned for importuning a soldier in a pub—the film’s major departure from the book.

Basing the incident on a scandal of the time, Ivory and Hesketh-Harvey included this subplot at Jhabvala’s suggestion, to give Clive a powerful excuse for breaking with Maurice. “We needed something more visual and dramatic than Clive just getting the ‘flu and being assailed by all kinds of doubts and guilts, and then coming back from Greece and telling Maurice, ‘I just don’t love you anymore,’” Ivory said. 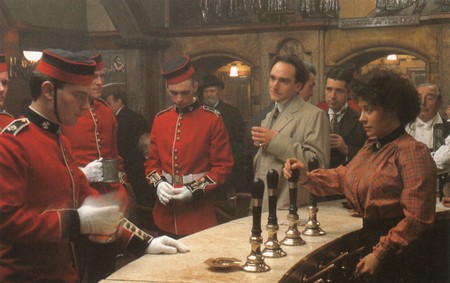 Ivory elicited emotionally straitened performances from Grant and Wilby (who makes the priggish Maurice sympathetic in his torment) and an ingenuously charming one from Graves, as the uncouth Alec. The film’s beauty resides in its sullen, masculine mise-en-scène, far removed from the frilly, sunlit look of A Room With a View.

Welling Puccini arias put some feminine bloom in the Tuscany of A Room With a View. The gathering somberness of Maurice, is informed by the Pierre L’Homme’s cinematography, which emphasizes blues, brown, and sallow yellows. The subdued lighting conveys regretfulness for the era that’s passing with the coming of the war.

The gloomy greenwood that swallows up Maurice and Alec, frames the tantalizing flashback the film bequeathes Clive, in which, as Forster wrote, “out of some external Cambridge his friend began beckoning to him, clothed in the sun, and shaking out the scents and sounds of the May term.”

“Maurice is now widely read and taught,” Peter Fulham wrote in The New Yorker in 2013. “The novel is remarkable not only for its beauty as a work of literature but for its bravery. I remember vividly when I first read it, about a year after I came out, and it served as a hopeful plea from another era: ‘Don’t give up.’” Fulham’s article appeared on June 26, 2013, the day the U.S. Supreme Court ruled that married same-sex couples were entitled to federal benefits and that same-sex marriages were allowed in California. 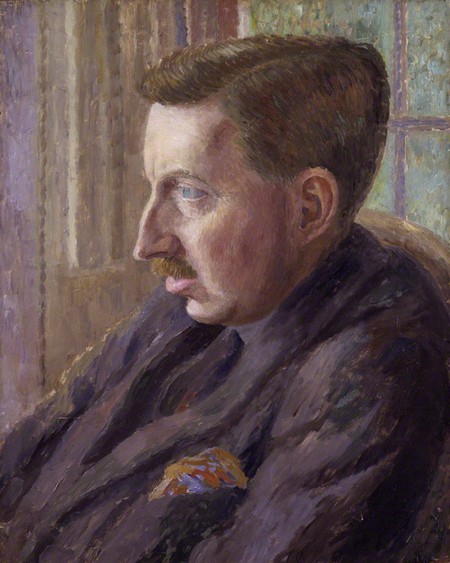 Maurice’s re-release is as timely in 2017 as it was in 1987. In February, the Justice Department under Jeff Sessions enacted an American version of Section 28 by withdrawing guidance issued to schools on the treatment of transgender students. This strongly indicated that the Trump government would no longer consider transgender rights to be protected under a 1972 civil rights law.

Fox in the henhouse

On May 4, Trump signed into law a religious liberty executive order that would allow ideological discrimination against gay people, women, religious minorities, and marginalized communities. “Donald Trump just let the fox into the henhouse,” said Sarah Warbelow, legal director of the Human Rights Campaign. “Through this executive order, Trump has directed Attorney General Jeff Sessions—a man who has denied LGBTQ people equality under the law—to seek a license to discriminate across all areas of the government.”

E.M. Forster lived in a time when a grown man could be imprisoned for seeking sex with another grown man, and when two men who chose to live together felt obliged to fade into a forest. With the majority of Americans now supportive of same-sex marriage and LGBT rights, Merchant-Ivory’s Maurice counsels against a return to the dark ages.

This is an updated version of an article that first appeared in The Listener. The 4K restoration of Maurice is playing at The Quad Cinema, 34 West 13th Street, New York, NY 10011.