Director James Ivory On The Strong Women Of 'Howard's End' 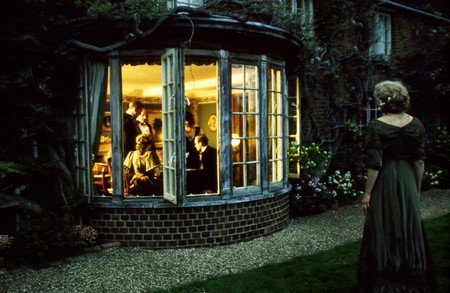 Of the five film adaptations of E.M. Forster’s novels that were released between 1984 and 1992, the three produced by Ismail Merchant and directed by James Ivory from Ruth Prawer Jhabvala’s screenplays together comprise the trend’s unassailable summit.

A Passage to India, which concluded David Lean’s forays into literary adventure, had its champions. Charles Sturridge’s Where Angels Fear to Tread was more guardedly praised. One suspects, however, that Forster (1879-1970), who had long resisted the filming of his oeuvre, would have likely preferred Merchant-Ivory-Jhabvala’s discreet yet passionate renderings of A Room With a View, Maurice, and Howard’s End.

The urbane irony of Forster’s prose style counterpointed his painful grappling with the social, racial, and gender inequalities that haunted him. In 1992’s Howards End most successfully, he sympathetically probed the gulfs between the rich, the comfortable, and the poor, as well as between materialistic men and arty women with bohemian inclinations. 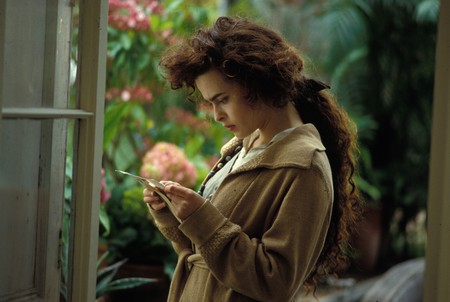 The film, which has been sumptuously restored and re-released, is an exemplary costume drama because it doesn’t sacrifice the misery of the English class war on the altar of the Masterpiece Theatre aesthetic. A kiss and a misunderstanding entangle the liberal Anglo-Germans sisters Margaret (Emma Thompson) and Helen Schlegel (Helena Bonham Carter) with the conservative industrialist Henry Wilcox (Anthony Hopkins), his ailing wife Ruth (Vanessa Redgrave), and their ungracious sons. An accidentally purloined umbrella acquaints the sisters with Leonard Bast (Samuel West), a poor bank clerk. Their attempt to help him destroys his livelihood.

Before his life unravels, the beauty-loving young man experiences a rural idyll in striking distance of the Wilcox family’s tranquil country estate, for which Forster named his book. The field of bluebells Leonard walks through gleams bluer than ever thanks to the 4K restoration, which was the subject of the first question The Culture Trip put to the 88-year-old filmmaker in a recent interview. 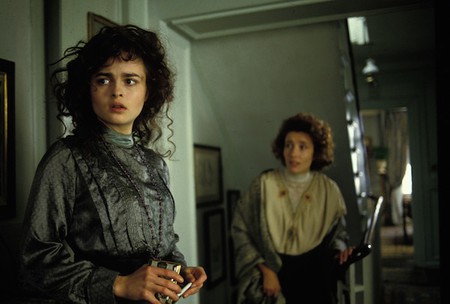 Did working on the restoration of Howards End make you reassess your visual compositions?

Not so much doing the actual work of it. When Tony Pierce-Roberts, the cameraman, started to regrade the color in London, I sat with him for a day and saw the film without sound. Watching it as a silent film, I was principally interested in seeing if anything was too dark, too warm, or too cool. That was in March. I didn’t really see the film complete until we took it to Cannes in May. It seemed familiar and right but I can’t say I examined it very closely until the other day when it was shown at the Film Society of Lincoln Center and I gave a talk about it afterwards. I don’t know why – though it was a totally different atmosphere than Cannes, of course – but I then watched it very carefully, and, yes, I saw it anew, mostly approvingly, though here and there I felt I might have done something a different way. As far as the compositions are concerned, I’ve never believed in my getting too involved in them.

I feel it’s intruding on another artist’s work, the cameraman’s. Naturally, when I’m looking through the camera, I might say, ‘Let’s go a little to the right,’ or a bit further back, or closer, or whatever’s needed. But I’ve always believed the composition is the cameraman’s prerogative. You must remember that I started out as a cameraman doing my own longish documentaries when I was in my twenties, and I was very careful about my own compositions. When I started making films in India, and working with Subrata Mitra, Satyajit Ray’s cameraman, I didn’t feel it was right to fiddle around with what he’d done unless there was a good reason. You have to assume that if you have good cameramen, which I’ve always had, they will come up with very good images. 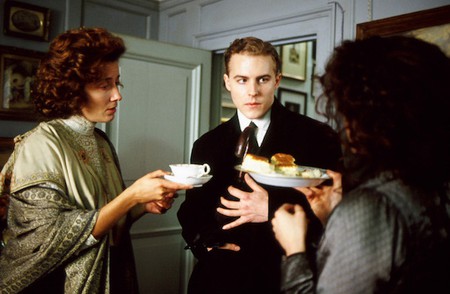 Yet there’s a shot in Howards End that struck me as a director’s shot. It’s at the start when Mrs. Wilcox drifts from the meadow to the house at Howards End and looks through a window at her family, lit from within. It’s as if she’s leading the viewer to look into the window of the actual film.

I feel it starts earlier with the close-up of her train [of her dress] going through the grass – that quite strange, almost abstract shot. At first, people don’t know what it is, but they follow it with interest. It was a completely accidental shot. As we were preparing the scene where Mrs. Wilcox looks though the window – a shot I had always planned – I was caught up by this very curious, snake-like image of her moving train. We hold the camera there a long time before we tilt up and see her face. Probably when we rehearsed the scene, Vanessa didn’t even have a train. It was one of those unexpected things that happens that might mean something. You’re not quite sure what, but you like it. That’s where I think you are led into the film.

That sequence immediately sums up the novel’s feeling for ‘spirit of place’ – what Howards End means to Mrs. Wilcox, later for Margaret, and eventually Helen. It’s a place of enchantment and serenity.

There is something strangely magical and almost archaic about it – it’s ancient like England’s ancient. 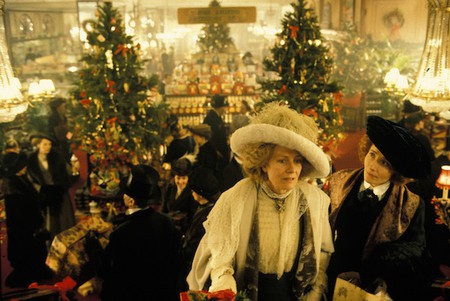 Mrs. Wilcox is the story’s abiding presence, even though she dies relatively early. She has a genuine love of people.

She has an open spirit, whereas the other Wilcoxes have somehow become closed.

Margaret is cut from the same cloth. When she’s standing on the staircase, talking to Henry after he has been widowed, she physically resembles Mrs. Wilcox. I wondered if you’d asked Emma Thompson to study Vanessa Redgrave on the set?

We rehearsed that scene and figured how best to shoot it – the staircase area was an enormous space to light – but it wasn’t planned that carefully. And, no, it wasn’t anything I said to Emma – I don’t think I was thinking of Mrs. Wilcox at that moment.

It could be that I wanted to see the connection between the two women continuing, especially in relation to Howards End as a retreat from the modern world. Sometimes films work on you that way.

It’s natural it would happen like that because, after all, Henry is asking Margaret to become his wife – the new Mrs. Wilcox – and from the first moment she’s not against that idea.

Whereas A Room With a View is feminine in look and tone, Maurice is masculine. Howards End is more about the conflict between male and female attitudes. Forster empathized mostly with Mrs. Wilcox, Margaret, and Helen, didn’t he?

Pretty much. Well, what do we have on the masculine side? Henry Wilcox [Anthony Hopkins] and his two sons, Charles [James Wilby] and Paul [Joseph Bennett], neither of whom is the most charming of men. Then there’s poor Leonard and Tibby [Adrian Ross Magenty], Margaret and Helen’s brother, who isn’t quite tethered and floats above everything. But the women together are a tower of strength, so we connect with them.

Margaret forgives Henry for his hypocrisy and intolerance. Did you want us to feel some compassion for him?

I think you feel compassion for Henry when he breaks down and starts to weep and hides his face, and when Margaret says she’s going to leave him, and says, ‘Here are the keys.’ Charles is probably going to go to prison for manslaughter so, as Margaret does, you ought to feel sorry for him, no matter how dreadful he’s been in the past. He was really hateful in forbidding Helen from staying the night at Howards End, but you forget that. I’m sure that’s what Forster wanted. Then Margaret overhears the remark made by Dolly [Susie Lindeman as Charles’s wife], ‘Isn’t is strange that Margaret’s getting Howards End after all?” And Margaret mentions that to Henry, who says, ‘Yes, my poor wife scribbled something on a piece of paper [bequeathing Howards End to Margaret, her friend], but we didn’t take it seriously,’ though he doesn’t tell her they burned it. Well, what is Margaret going to say to him? She’s not going to start yelling at him after he’s just left her the house himself and she’s now the absolute mistress of Howards End. She just has to go along with it. So, yes, you have to have some feeling for him as a man who’s getting old, losing his powers, and beginning to let control pass from his hands, and who is reduced at this stage. 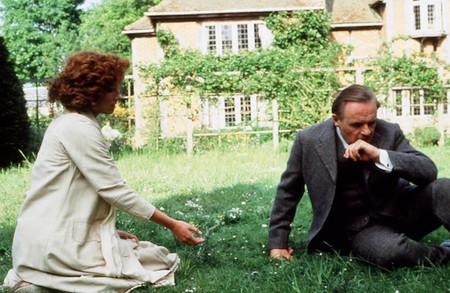 Forster’s phrase ‘only connect’ – his entreaty that people touch hands across social barriers – comes from Howards End, but do you think it’s the Forster novel that best expresses the idea?

Probably, but then it has disastrous consequences, doesn’t it? Margaret and Helen try to connect with the poor man, Leonard Bast [Samuel West], but the attempt leads not only to his financial ruin but something much worse, his violent death. That’s the other side of trying to connect, I suppose. It can have a beastly and terrible aftermath. But that connection is what Forster always wanted. People who were not really intended by English society to connect at all do connect, and they overcome their difference, as in A Room With a View and again in Maurice. Again, it doesn’t work out in A Passage to India. There is the hope that the Indians and the British would connect [as equals], but – what is it Forster writes at the end? – “No, not yet….No, not there.”

The Criterion Collection has already restored A Room With a View. Are there plans to restore Maurice, too?

That’s happening now – it’s the next one that’s going to come out.

It was ahead of its time in depicting a male romance.

It was way ahead of its time because it has a happy ending. Up to that point [1987], and even beyond it, right on down to Brokeback Mountain, something terrible always happened to the lovers. That was the important thing about that novel for Forster. 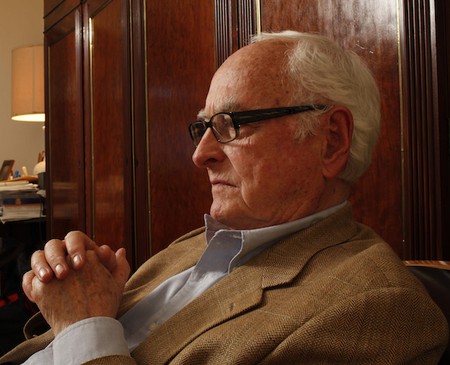 No other director-writer-producer team has had so much longevity and made so many emotionally rich and humanistic films as you, Ruth, and Ismail. You must treasure the years the three of you spent working together.

I do, of course, very much. That’s especially true lately because I’ve been re-reading all the letters. When Ruth and I worked on our screenplays, she was normally in Delhi while I was in New York, and from the beginning of our association [1962] right on down to 1975 [when she moved to New York], we wrote hundreds and hundreds of letters, back and forth. I saved every single one she wrote to me, and when she died, her daughters gave me all the letters I wrote to her. Reading them takes me to another time and place, and it’s only now beginning to dawn on me what it all was.

Apart from my luck of being with Ismail, I was so fortunate to have a wonderful fiction-writer like Ruth as a partner. Probably no other director ever had a working relationship with a major novelist that went on for close to fifty years. The emotional quality that can be found in the films wouldn’t have been there if Ruth hadn’t been present. She was always published as an author, but she liked writing the screenplays – and, yes, that was our luck.