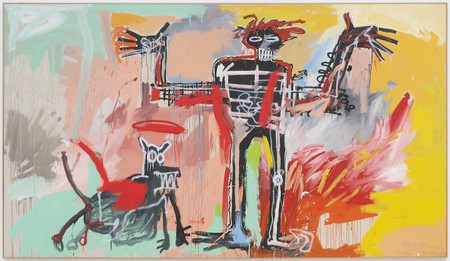 The Brant Foundation, an art study center and exhibition space dedicated to contemporary art and design in Greenwich, CT, will present an exhibition of major works by Neo-Expressionist artist Jean Michel-Basquiat. The show will take place from March 2019 at the Foundation’s new East Village location on 6th Street, just off 1st Avenue.

The survey will unite Basquiat’s “most important masterworks,” according to a press release, from the Brant Collections as well as museums and private collections around the world. The exhibition is organized by the Fondation Louis Vuitton in Paris and curated by Austrian curator and art theorist Dr Dieter Buchhart with The Brand Foundation’s Peter Brant, who has collected Basquiat’s work since the 1980s.

“The retrospective will show Basquiat as a resolutely contemporary artist who created a foretaste of our internet society by using cut-and-paste sampling from his surroundings,” said Buchhart in a statement. “With the astonishing radicalness of his artistic practice, Basquiat renewed the concept of art with enduring impact.”

Basquiat lived and worked in a loft at 57 Great Jones Street from 1983 until his death in 1988. The artist remains synonymous with the East Village, where The Brant Foundation is putting down roots in a historic 20th-century building that was originally a substation for the energy company Con Edison. In the 1980s, while Basquiat catapulted to stardom, the space was occupied by pioneering American Conceptual artist Walter De Maria, who lived and worked on site until his death in 2013.

Ahead of The Brant Foundation’s first exhibition in the building, Gluckman Tang Architects’s Richard Gluckman is embarking on a renovation project that will restore the 7,000sq ft of exhibition space inside the four-story, 16,000sq ft building, including two new exterior gardens and a landscape-designed roof terrace.

“Basquiat has been a cornerstone of the East Village art scene for decades,” Brant said in a statement, “and to bring his work back to the neighborhood that inspired it is a great privilege.”